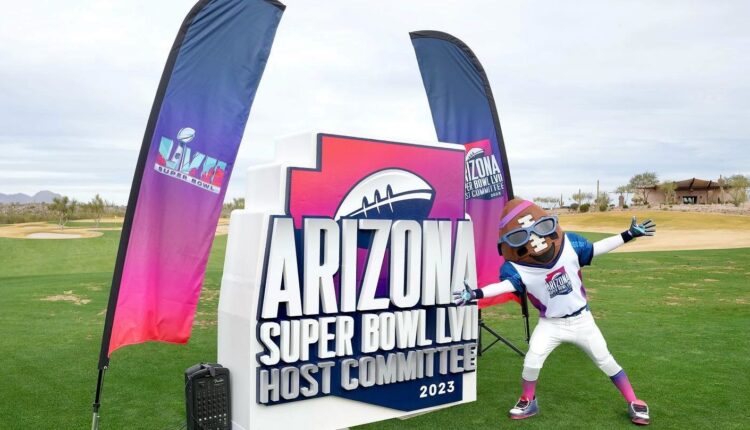 PHOENIX — Super Bowl LVII is bringing much more than football to the Valley in February with events from Glendale to Mesa.

Committee President and CEO Jay Parry told KTAR 92.3 FM’s Arizona’s Evening News on Friday the plan was to bring the Super Bowl to the entire Valley, not only Glendale where the game will be played at State Farm Stadium on Feb. 12.

“People can wander around the whole place and find Super Bowl decor, whether it’s the supersized Roman numerals LVII at Murphy Park in Glendale, we’ve got some in Scottsdale, we’ve got some in Goodyear, it’s a great photo moment” Parry said. “And then billboards and all sorts of Super Bowl paraphernalia popping up everywhere. So they can start right now and get in the spirit.”

Pre-game events will kick into gear starting Feb. 4-5 with the Super Bowl Experience at the Phoenix Convention Center in downtown.

Opening Night — which will offer public appearances by players and coaches, legend autographs and live entertainment — is on Feb. 6 at Footprint Center.

From there, the festivities branch out to both ends of the Valley.

There will be plenty of concerts during Super Bowl week, including at the Super Bowl Experience at Margaret T. Hance Park in Phoenix where Jimmy Eat World is performing on Feb. 9 and Lee Brice on Feb. 10.

Music Fest is set for Feb. 9-11 at Footprint Center with Paramore, the Dave Matthews Band, Imagine Dragons and Kane Brown headlining. The Killers, Machine Gun Kelly, The Chain Smokers, 21 Savage and Snoop Dogg are among other artists with shows in the Phoenix metro area ahead of game time.

With football in the West, the East Valley will host the 24th annual Super Bowl Gospel Celebration in Mesa, the Historic Old Town ESPN Main Street Tailgate in Scottsdale and Sports Illustrated The Party at Talking Stick Resort in Scottsdale.

The Super Bowl has been played in Arizona three times before — twice in Glendale. Parry said the committee wanted to plan something that had not been done before on game day.

The Official Super Bowl Watch Party at Hance Park will feature large LED screens and open at 11 am ahead of a 4:30 pm kickoff.

“People couldn’t wait to be here in early February,” Parry said. “I mean, we know they come from around the world, they come from across the US and we’re just so lucky to have it right here in our backyard. And we do want to make it great for our residents.”

The game’s matchup will be set on Jan. 29 after the conference championship games.

The events schedule is posted online.

Juniper, Liam most popular baby names in Coconino County for 2022