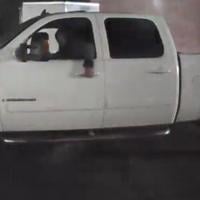 TUCSON (KVOA) — Authorities are asking for the public’s help in identifying a suspect involved in the theft of a box trailer on Tucson’s northeast side in March.

According to the Pima County Sheriff’s Department, a white truck was seen backing up to a box trailer near the 2100 block of North Wilmot Rd. when the trailer was stolen on March 28.

The truck is described as a 2008 or possibly newer white Chevrolet four-door pick up. There dent on the rear driver side fender and on the tire on the bed, officials say.

The box trailer has since been recovered.

Anyone with information is asked to call 9-1-1. You can also submit an anonymous tip, with the potential for a reward, by text, phone, or by going to 88CRIME.org