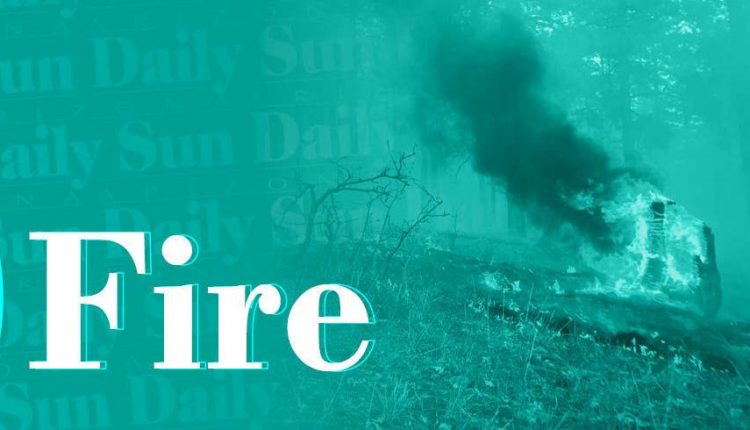 A northbound vehicle towing an RV caught fire near milepost 303 of I-17 Sunday afternoon, igniting a 30-acre wildfire in the roadside brush. The resulting “Watermelon Fire” was reported at 2:50 pm and said to be growing at a “moderate speed” through dry fuels. No one was injured and no structures were lost, and the Watermelon Fire was fully contained by 9 pm

The Coconino National Forest dispatched about 70 personnel, including a battalion, a hotshot crew, seven engines, two fire prevention patrol units, a fuels crew and a law enforcement officer, to the scene. By about 4 pm, firefighters had “stopped forward progress” of the wildfire. North and southbound lanes of the I-17 remained closed from about 3 to 7 pm

The fire began in the undercarriage of the northbound vehicle, a blue Kia Sorento, and “fully engulfed” the SUV while it was towing an RV, said Bart Graves of the Arizona Department of Public Safety (DPS). Fortunately, the driver was able to pull over to the shoulder and exit the vehicle safely.

“Motorists stopped to help,” Graves said. “Multiple subjects on scene tried to disconnect the trailer from the SUV.”

It’s unclear how the vehicle fire began, but Graves said “a lot of these fires are started by tires that implode” when they disintegrate at a high rate of speed. He also mentioned that dragging tow chains, faulty oil lines, and “any number” of mechanical issues can result in vehicle fires, especially when combined with the hot temperatures and high volume of travel typical in summertime.

Winds caught the initial vehicle fire and spread it to the median and the roadside, covering the highway in smoke and forcing total closure of the interstate.

Matt Anderson was heading northbound on the I-17 Sunday evening and detoured through Sedona when he encountered signs alerting him to the closure ahead. Traffic became “a parking lot,” Anderson said, and it took him “what felt like hours,” to go the roughly 17 miles from the Village of Oak Creek to the north end of Sedona, where he intended to take the 89A home to flagstaff

However, he and other motorists found that when they reached 89A, it was too closed due to maintenance scheduled by the Arizona Department of Transportation. Some motorists “bailed,” and took Schnebly Hill road to Flagstaff, but Anderson drove back to the I-17, which had started to let traffic through.

“Flames were still visible in some spots as we drove back through the area,” Anderson said.

While the Watermelon was fully contained by 9 pm, Forest Service crews remained through Monday morning to “mop up” any remaining fires and hot spots.

This week continues to call for dry, hot conditions, according to the National Weather Service in Bellemont. The forecast has temperatures rising to nearly 90 degrees on Friday and Saturday, though wind conditions should be normal for this time of year.