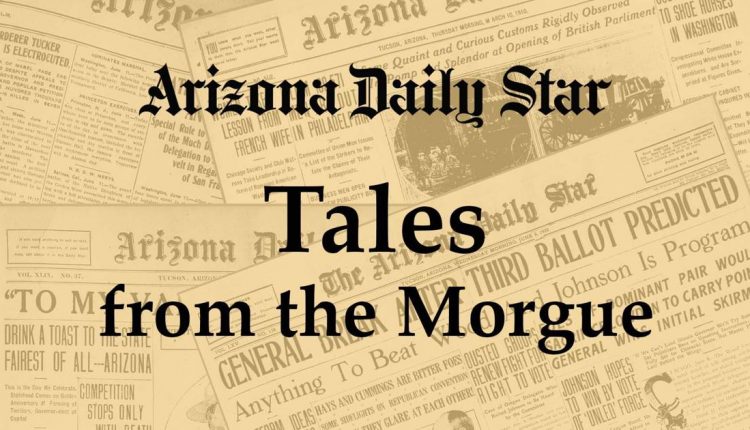 Tales from the Morgue: 100 years ago, a widow needs help | Tucson history and stories from the Star’s archives

Hospital day, the anniversary of the birth of Florence Nightingale, which was observed yesterday by several hundred Tucsonans, who sent present of flowers and baskets to the patients at the various hospitals yesterday morning, and in the afternoon attended “open house” at Pastime Park.

About 300 persons visited the Pastime Park hospital yesterday afternoon during the “open house” maintained by the veterans, and a large number of these remained in the evening to enjoy the program of music and dancing which was provided.

The patients at the hospital were the guests yesterday afternoon of Coach McKale of the university and of the Rotary club at the second game of the baseball series between the University of Arizona and the University of Southern California. Free transportation was provided by members of the Rotary club, who called for the veterans at the hospital at 3 o’clock and took them to the field. After the game the veterans were taken for a short ride about the city and back to the hospital for the evening program.

Open house was also held at the Comstock hospital from 3 to 5 o’clock yesterday afternoon. Visitors were shown through the new addition to the hospital, which was the gift of the Organized Charities and has just been completed.

A silver tea was given yesterday at St. Luke’s and a fairly large amount was realized for the purchase of the 12 new beds which it is desired to install soon to care for patients who are seeking admission.

The evening program at Pastime Park consisted largely of music, furnished by three orchestras and a band, in addition to vocal numbers.

The program was opened at 6 o’clock by the Frolic’s orchestra, which furnished several particularly jazzy numbers.

The high school band, under the direction of Arthur Sewell, followed with a varied collection of jazz and old-time favorites.

Miss Mary Eager furnished two aesthetic dancing numbers and several folk dances, which she executed with considerable grace and charm. She received much applause. She was accompanied on the piano by Miss Dorothy May Green.

Miss Selma Harrison furnished several vocal solos, followed by a brief monologue by Mrs Bentlsy Winstanley. Mrs. Jeremiah Metzger and Mrs. OE Weaver were much applauded for their vocal duets and for their solos. Their selections included “Sometime, Somewhere,” “Lassie O’ Mine,” “When Life Is Sweetest” and selections from the light opera “Miss Charity.”

The elks’ band furnished the closing numbers of the evening’s entertainment with a whirlwind of jazz and pep.

Donuts and coffee were furnished by the Salvation Army, and disappeared with the same rapidity as was customary in the trenches.

The crowd at the evening entertainment is said to have been one of the largest ever seen in Pastime Park, while the hospital was crowded all afternoon by visitors.

A large exhibition of the veterans’ craftwork was on display all afternoon, and practically every article was sold before evening.

The past and future of Tucson’s film industry