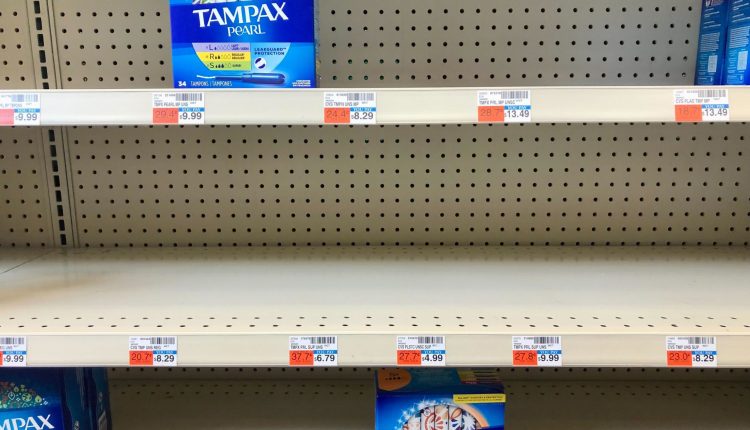 PHOENIX – The latest supply chain problem – a shortage of feminine care items – has prompted Arizona advocates to renew calls for “period equity” to ensure that menstrual products are accessible and affordable for all.

These products are a necessity, not a luxury, advocates say, and lack of access can lead to disruptions at work or school, emotional stress, infections and potentially even death.

Worker shortages and manufacturing shutdowns brought on by the COVID-19 pandemic, coupled with disruptions related to the war in Ukraine, have disrupted global supply chains, resulting in shortages of baby formula, popcorn and, now, tampons.

Consumers have taken to social media to express frustration over empty shelves and possible price gouging. For example, a 36-count box of Tampax was listed last week for $17 on Amazon.com. A 50-count box of the same product cost $9.89 at an online drugstore – but was out of stock.

Bloomberg reports the price of tampons has risen almost 10% in the past year, and the price of pads has increased 8%.

“Access to menstrual products should be treated like every other essential good,” Hassan wrote. “At the beginning of the pandemic, price gouging of essentials like toilet paper, cleaning supplies and hand sanitizer was rightly criticized as an exploitation of an emergency for financial gain. Menstrual products should receive that same consideration.”

Procter & Gamble, Kimberly-Clark and Edgewell did not respond to messages from Cronkite News, but in statements to CNET, P&G and Edgewell officials said they are working to increase production. A Kimberly-Clark spokesperson said the company wasn’t experiencing any shortages and that it plans to donate menstrual supplies to the Alliance for Period Supplies, which distributes period products for free to those in need.

Studies have documented the challenges many face in affording period products.

Lack of access to supplies can result in missed classes and anxiety, research shows. There are also physical health risks: Products might be used longer than intended or consumers might turn to unhygienic substitutes.

“We know that lack of access to period products impacts a menstruator’s ability to work, it impacts mental health, and especially their physical health,” said Demetra Presley, executive director of Arizona nonprofit Go With the Flow. The group, founded in 2017, provides free period supplies to schools in Tucson and Phoenix to help low-income students.

“Sometimes they expand the shelf life of the items that they do have access to,” Presley said. “If that happens, they’re at increased likelihood of UTIs, pelvic infections and things that can sometimes even be fatal, like toxic shock syndrome,” a rare condition related to overgrowth of bacteria.

Dana Marlowe, founder and director of I Support the Girls, a Maryland-based nonprofit that works with manufacturers to donate period supplies to other nonprofits, said that despite hourly requests for supplies, her group can’t meet the need for tampons right now.

Marlowe said one Scottsdale organization has reached out twice in the past week urgently requesting tampons for unhoused people, asylum-seekers and refugees in Arizona.

“It’s really hard as a nonprofit to walk into the warehouse, see the shelves are still bare, and know that we have to disappoint nonprofits and individuals, and we can’t get them products they need,” Marlowe said.

Since 2020, she has seen a 60% decrease in the number of donated tampons her group has been able to distribute. In January, donations fell even more sharply.

“What we donate is based on what we receive, so when we stopped receiving as many manufacturer donations, we thought this was coming,” Marlowe said.

In recent years, efforts to fight period poverty have prompted some states to eliminate sales taxes on period products. Arizona remains one of two dozen states that still tax these items, according to the advocacy group Period Law.

Several attempts to exempt tampons, pads, menstrual cups, disposable diapers and similar items from taxes have failed in the Arizona Legislature, including a 2022 bill sponsored by Rep. Daniel Hernandez, D-Tucson.

Jennifer Burns, senior director of government and media relations at the Arizona Alliance for Community Health Centers, said in a statement to Cronkite News that “the current supply shortages and inflation are increasing the cost and further limiting the access of some women to obtain products which are a necessity, not a luxury.”

Procter & Gamble and Edgewell have blamed the shortage on the increased cost of plastic and cotton as well as COVID-19 outbreaks that slowed manufacturing in the U.S. and Canada. A P&G spokeswoman also told Time that tampon sales had skyrocketed following a popular ad campaign featuring comedian Amy Schumer.

Hope Women’s Center, with several locations across Maricopa County, is a nonprofit helping vulnerable women and girls. In an email to Cronkite News, CEO Tammy Abernethy said she hasn’t heard women talking about the shortage yet but added that the organization has a supply of tampons available.

Senate Deal Raises Hopes for a Reduction in Gun Suicides