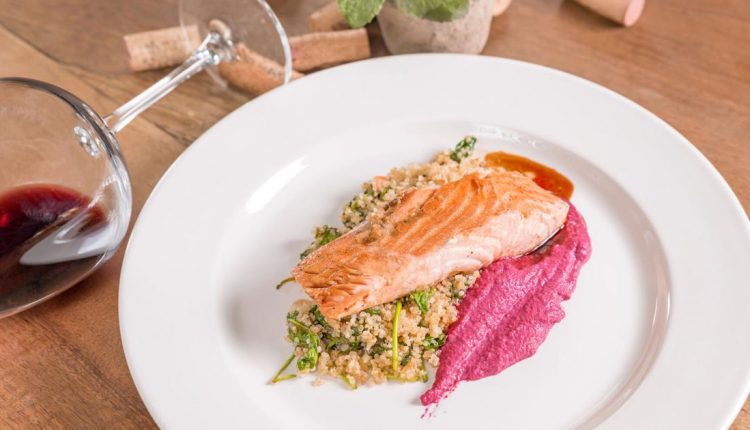 Taste of Tucson: A dinner so fast that it goes backward in time | entertainment

Robin Mather Special to the

In her later years, my mother gladly delegated almost all cooking chores to me. Naturally, our cooking styles were quite different, and she was usually gracious enough not to complain about the meals I presented to her.

The one dish with which she simply couldn’t make her peace, however, was grilled fish. She liked to eat it, but fretted about its prep. “It’s done so almost that it’s like it’s going backwards in time,” she grumbled to me one evening, when I set down a platter of grilled whole rainbow trout stuffed with lemon slices and lavish amounts of dill. “So much trouble to fire up the grill just for that.”

Bosch, I said. Pretending to rebuke her, I said, “You didn’t have to lift a finger. Now just shut up and eat.” She laughed and dug in.

As a little girl, I was afraid of fish, having once gotten a bone stuck in my throat. Then, my father taught me how to lift away the fillets delicately and easily from a whole fish. “Follow the line along the side,” he said, tracing it with the tip of a knife. “Make a cut there, and then you can lift the fillets away to expose the bones. They’re easy to remove then.” He was right about that, as he was about almost everything he taught me.

These days when I grill fish, I often marinate them in the fragrant Moroccan herb paste called chermoula. It’s quick and easy to make — its only fussy step is toasting the cumin and coriander seeds briefly, and that’s hardly painful.

Because it keeps for several days in the refrigerator, one batch of chermoula often ends up on fish, lamb, or chicken as well. Sometimes I stir a tablespoonful into a basic vinaigrette, just to give it some luscious oomph, or into rice or steamed couscous that sides something more basic. It’s a surprising addition to mayonnaise for sandwiches, too.

Makes about 3/4 cup chermoula, enough to marinate and grill 4 salmon steaks or fillets

Chermoula, the Moroccan spice paste, is also a great marinade and grilling sauce for chicken, lamb, and firm mild fish. If you happen to have preserved lemons on hand, substitute ¼ preserved lemon, pulp discarded and beef coarsely chopped, for the lemon zest and juice. If you don’t have preserved lemons, see the note below if you’d like to make a quick batch.

1 ½ teaspoons lemon zest, plus 1 ½ tablespoons juice (or more to taste)

Scrape the mixture into a bowl and cover with plastic wrap. Refrigerate for up to three days.

To prepare the salmon, place steaks or fillets in a shallow dish. Divide the chermoula into half. Use half to marinate the fish for up to four hours in the refrigerator. At cooking time, preheat the grill or broiler. Arrange marinated fillets on an oiled grill grate or broiler pan and brush lavishly with remaining chermoula. Cook until fish just barely flakes when prodded with a fork and remove from heat.

Note: Traditionally, Moroccan preserved lemons take a month or more to cure. If you need some on a shorter time frame, try this method.

Use Meyer lemons if possible. Preheat the oven to 200 degrees. Scrub, trim off both ends and cut four lemons into sixths lengthwise. Place them in a baking dish and scatter over them four tablespoons of coarse salt.

Stir in about a cup of fresh lemon juice. Bake for three hours, stirring occasionally. Remove from the oven and allow to cool. Transfer the lemons and their brine to a glass jar with a snug-fitting lid. Refrigerate and use within two months.