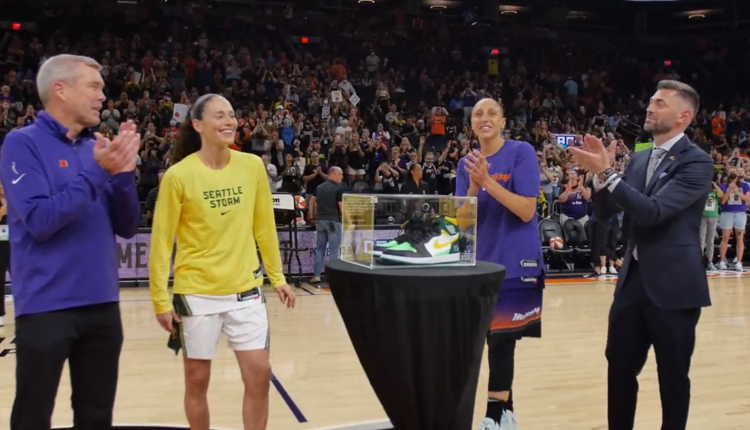 The duo that originally played together at the University of Connecticut from 2000-02 had their friendship and rivalry serve as one of the WNBA’s signature storylines the last two decades.

Both have remained with the same WNBA franchise for the entirety of their careers, and in their 46th final regular season matchup on Friday, the Mercury and Taurasi presented the retiring 41-year-old Bird some Jordan 1s in custom Storm colors.

Diana Taurasi and the Phoenix Mercury honor Sue Bird prior to her final regular season game in the Valley. #4TheValley pic.twitter.com/1tr89kBQeJ

The case for the shoes reads, “Through your contributions on and off the court, you showed the world what true greatness looks like. Forever a legend. Thank you Sue! —Phoenix Mercury”

The two had a press conference together after the game, a first for both when it comes to a member of the opposition sitting alongside them.

The Final Chapter concluded with a joint press conference?

Taurasi joked that she’s glad it’s over between the two of them and Bird downplayed the significance of the matchup.

“It wasn’t that different. There was no extra anything on this,” Bird said. “I think of this is another game and the story of our WNBA ‘rivalry’ and I think of it more as just a celebration. I don’t think of it beyond that.”

Friday was also Taurasi’s 500th career game, the second-most all-time in WNBA history. She only trails, of course, Bird. She played no. 571 in Phoenix.

Bird and Taurasi won five Olympic gold medals as teammates for the United States from 2004-21. Across their WNBA careers, Bird has won four WNBA championships while Taurasi has three.

Taurasi, 40, told ESPN on Thursday that as she has gotten older, the thoughts about retirement and conversations with her family have started to come up. She will be a free agent at the end of the season.