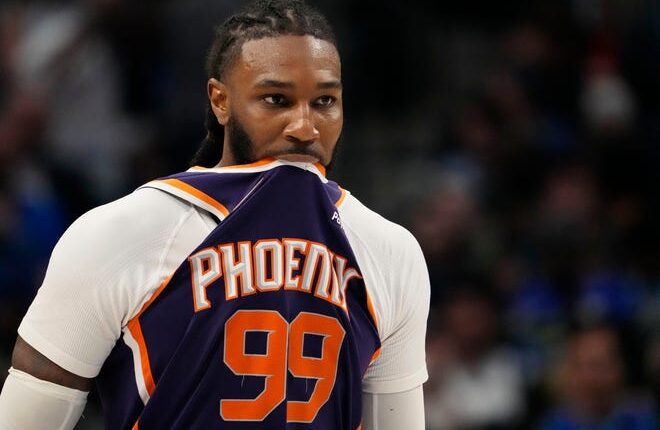 Jae Crowder is in the news just as much the Phoenix Suns right now — and that’s saying something with Devin Booker still out with groin soreness and the Monty Williams-Deandre Ayton late late in Tuesday’s loss to Washington.

This week, Marc Stein of The Stein Line reported the Suns (19-13) turned down a deal with the Wizards involving forward Rui Hachimura and an NBA general manager told Heavy.com teams are turned off by Crowder not showing up to play this season .

“He just didn’t show up,” the general manager said in the Heavy.com report. “He said he’s not playing unless he gets a contract extension that he wants. I think a lot of teams are turned off by that in and of itself. Like, ‘What? You don’t want to play for one of the best teams in the NBA and prove that you’re worth it so you can get a contract next year? Like, you’re not that good, bro. What are you doing?’ It’s a weird dynamic. It’s one thing if Kevin Durant’s holding out because he’s not getting paid enough, but Jae Crowder? Seriously?”

The Suns and Crowder “mutually agreed” the veteran forward wouldn’t report to training camp as they’ve been trying to trade him.

Phoenix has been paying Crowder, who is due $10.1 million on the final year of his contract.

“I just don’t understand this, and I’m not alone,” the GM said. “He just had to play the year and show that he’s a great leader and has a great attitude.”

Crowder told TNT’s Chris Haynes that the narrative that he didn’t show up to camp because he’s no longer starting isn’t true. Cam Johnson was named the starter during training camp.

Crowder started all 80 games he played, counting the playoffs, during Phoenix’s historic 64-win season in 2021-22.

He’s been linked to potential deals with Atlanta, Milwaukee, Utah and now Washington, but a source informed The Republic that Crowder needs to join a team that can make a playoff run to give him time to show he’s worth at least a multiyear deal.

Crowder signed a three-year, $30-million deal with Phoenix going into the 2020-21 season.

Ishbia has bought the Suns and WNBA’s Phoenix Mercury from Robert Sarver for $4 billion.

Motorcyclist dead after colliding with car in Tucson