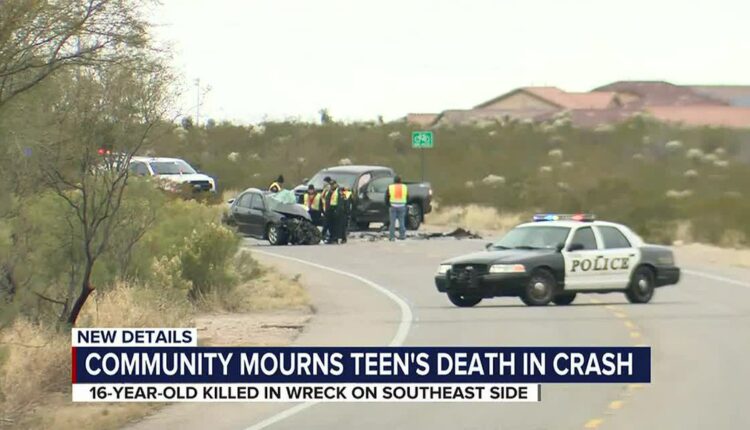 Teen girl dies in crash on Tucson’s southeast side

TUCSON, Ariz. (KOLD News 13) – On Tucson’s southeast side, families, students, and school staff are grieving the loss of one of their own. A 16-year-old girl died in a car crash Monday morning.

Tucson Police are not identifying out of her respect for the family. This happened near East Mary Ann Cleveland Way and South Atterbury Wash Way.

Parents and members of the community spoke out about the dangers of this road and said something needs to change.

“I can’t believe nobody has done anything,” said mother, Anel Schmidt. “There’s always, always accidents in there until when? We’ve got to start speaking out.”

Parents Anel and Karl Schmidt said accidents on Mary Ann Cleveland Way between the two high schools in the area happen practically every day. They said this is the second crash involving a teen on this road in less than a month. Their children attend Cienega High School and their son knew the 16-year-old who died in the crash Monday.

“Emotionally, they’re affected by this. This is somebody that my son has known since elementary school. They weren’t close, but it’s a classmate that he’s known for a long time and the thing he said to me is, it’s so hard to imagine that person’s never going to be there again,” Karl Schmidt said.

This is a very tight-knit community and many parents have concerns over the road. With two high schools in the area, there’s also a lot of new drivers. The Schmidts worry about their kids driving down this road every day. Their children have told them the whole school is feeling the loss of the student.

″They were having spirit week, but they canceled it in respect, you know. Yesterday, she said everybody was crying. She said, ‘mom it was very weird, the environment,’” the mother explained.

It’s not just impacting young drivers. We spoke with a woman who lives right off Mary Ann Cleveland Way.

“I sit out in my backyard and I hear them every day, almost, or if not, once a week,” said Lisa Heady.

It’s a two-lane highway and she said there has been talk about widening the road. She thinks that’s only part of the problem, but the real issue is speeding and distracted driving.

″If they patrol it, it may help. The bottom line as drivers and being adults driving and teaching our kids driving, just pay attention. But, I truly think they need to patrol it heavier and maybe that will stop some of this for a while, but I don’t know,” she said.

The high school the teen attended does have resources available for families, students, and staff who are grieving. This Includes grief counseling, therapy, a crisis team and many other things that will be available as long as needed.

The other driver in the crash was a man in his 30s. He has not been identified by the police, but he is being treated for minor injuries. Police say he was not impaired at the time of the crash.