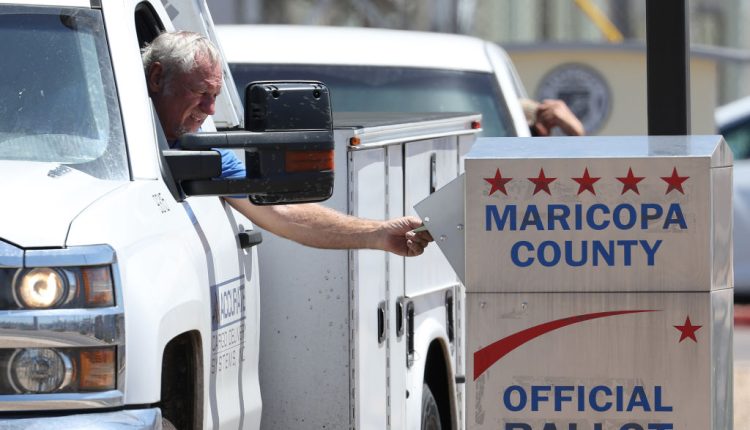 A federal judge has issued a temporary restraining order against a group that has been monitoring drop boxes in Arizona, saying they can’t spread misinformation about voting, among other limitations.

The judge, who is overseeing one of two cases brought against drop box monitoring groups, said last week that the injunction being sought in one of the cases would likely violate the First Amendment — the case is currently on appeal — but the same judge Tuesday said that new evidence presented in a separate lawsuit was compelling enough to justify a restraining order.

“We heard evidence that we did not hear last week, evidence in context of individuals being harassed and intimidated,” Judge Michael Liburdi said. “I think the evidence was much stronger in this case and I think that it justifies this narrowly tailored form of relief.”

The case, brought by Protect Democracy on behalf of the League of Women Voters of Arizona, has now been consolidated alongside the case brought by the Arizona Alliance for Retired Americans, which is currently appealing Friday’s ruling to the 9th Circuit Court of Appeals.

The League’s case is going after the QAnon-linked group Clean Elections USA, lead by Melody Jennings, who has been posting to her over 36,000 followers on social media platform Truth Social about alleged “ballot mules” found in Maricopa County.

The increased attention to ballot drop boxes is being fueled by the debunked film “2000 Mules,” in which conservative filmmaker Dinesh D’Souza alleged that supposed “ballot mules” were tracked by using cell phone geolocation data. The film alleges the people were paid to stuff ballot boxes with completed ballots, but provides no actual evidence such a thing happened.

The practice of submitting a ballot completed by another person, pejoratively referred to as ballot harvesting, is largely illegal in Arizona, though there are important exceptions.

The new temporary restraining order, or TRO for short, bars anyone from Jennings’ group from training or encouraging others to intentionally come within 75 feet of a drop box or a building where a drop box is held. It also bars anyone associated with them from following voters from a drop box or verbally engaging with them.

The group also cannot post photos or videos of the boxes online and can only observe.

Any member of the organization who openly carries or wears body armor will also find themselves in violation of the TRO and, if they are found to be carrying a concealed weapon or concealing body armor they’ll be in violation as well.

Jennings will also have to post to her Truth Social account that it is not always illegal to deposit multiple ballots in Arizona and must link to the Arizona state statue that outlines who all can drop off ballots, which includes caregivers, all members of the same household, spouses and blood relatives. Jennings also has to post a link to the TRO on her social media and the posts must remain up until the end of the election.

The court Tuesday heard from a number of witnesses explaining how the recent voter intimidation at drop boxes has created burdens on their voter outreach efforts, but the court also heard directly from voters who were approached by drop box watchers.

“I think every person there was filming on some sort of device,” a 51-year-old Mesa resident, known as “Complainant 240” to shield his identity, said of the about eight to 10 people who were there the night he went to drop off his own ballot and that of his wife.

Complainant 240 became a hotbed for conspiracy theorists who published photos of him as an alleged “mule” because he was putting his ballots under his shirt before depositing them in the drop box. At Tuesday’s hearing he described why he did so.

When the Mesa resident pulled up to the parking lot of the Mesa Juvenile Court, which has been a hotbed for drop box watchers, he saw the people watching and it made his wife nervous and fearful. The two had intended to drop their ballots off at City Hall, as they did the election prior, but at the time the location was closed.

The watchers were 50 to 60 feet away from the dropbox and, after a discussion with his wife, he decided he’d take the ballots. He said he was fearful of them being able to see his phone number and name on the outside of the envelope.

The fear of this came from one of the watchers who had a camera with what appeared to be a telephoto lens that was between 7 and 9 inches in length, he said. As he began to head to the drop box, a woman approached him and asked him if he was a mule. He ignored her.

He pulled the ballots out of his shirt and dropped them off and then things began to get more heated.

As he walked back to his car another person began to make a comment about ballot harvesting and mules. Then someone approached him and said “we are hunting mules.” Complainant 240 said that he felt the statement was meant to bully and intimidate him.

He backed out in a way to try not to show the group his license plate, which only made things worse as the man who had the telephoto lens would get into a car and follow the couple out of the parking lot and down the street. The man later filed a complaint with the Secretary of State’s Office, along with other people who have faced similar experiences at the same location.

“My wife was terrified,” the man said.

Jennings shared a picture of Complainant 240 on Truth Social the night of the incident, saying he was trying to avoid having his plates photographed.

“This guy. Drove in backwards to avoid plate detection. Got out showing his back.Pulled ballots out of his shirt. I need people there tonight to help my people. Lots of you!” Jennings said, adding that observers needed to be 75 feet away. “Someone get tags. No talking to them. DO NOT GO INSIDE 75 ft! They are trying to get us to engage them. Do not do it!”

While the TRO has been issued, there could be appeals from Jennings and her attorneys, who see it as unconstitutional.

Attorney Alexander Kolodin, who is a Republican candidate for the Arizona House of Representatives in District 3, said that the media had stoked fear in voters just as much as Jennings’ group.

“What almost all of them testified to was the reason they were afraid of the drop boxes was the media,” Kolodin said. “Why is it that those mainstream outlets get to report?”

Judge Liburdi said that Kolodin “struck a chord” and “made a good point” about the media’s influence on public perception of drop boxes.

Kolodin also argued that his client was “on trial for the entire state” and that only Complainant 240 was able to directly connect actions by watchers to Jennings. No witness was able to definitively say what group the watchers were with. No watcher ever identified themselves to the witnesses and witnesses stated their intent to leave the scene quickly.