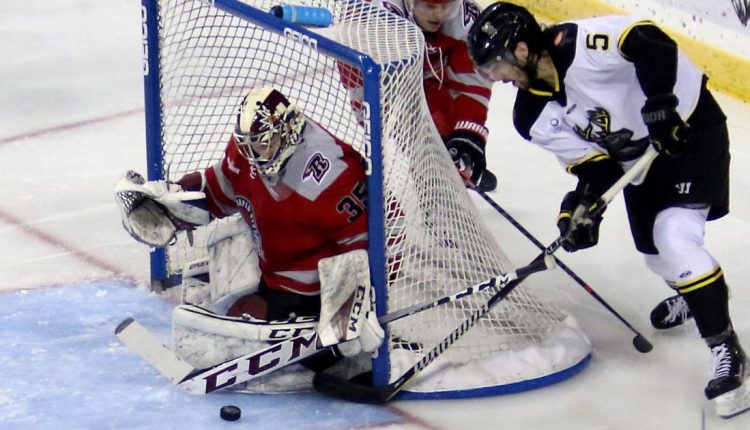 Rapid City Rush goalkeeper David Tendeck has been promoted from the Arizona Coyotes to the AHL Tucson Roadrunners, while strikers Logan Nelson and Max Coatta and defenseman Quinn Wichers have also been promoted, the team said Tuesday afternoon.

Goalie Bailey Brkin, who spent training camp at Rapid City, was also signed by the Rush following the release of Hayden Stewart on Monday.

Tendeck is traveling to Tucson for the second time this season. He spent a week with the Roadrunners in November but didn’t appear in any game. Over 15 games for Rapid City, Tendeck is 4-10-1-0 with 3.31 goals against average and 0.907 save percentages.

Nelson is returning to the AHL after appearing in two games for Tucson recently. On his first appearance at the Roadrunners, he did not collect any points. For the rush this season, Nelson has ten goals and 26 assists in 32 games played. He is the assistant leader of the ECHL and second in the league on points.

Wichers is joining Tucson for the third time this season. The rookie defender has played five games for the Roadrunners and failed to score a point to -2 with a two-minute penalty while skating. In 23 games for the Rush, Wichers has scored two goals and one assist.

Coatta opened the season with a game for Tucson. During his time at The Rush, he set new career highs with 12 goals and 13 assists in 33 games played.

Brkin opened his season in the Southern Professional Hockey League with the Quad City Storm. Over 12 games for Quad City he is 8-2-1-1 with 2.07 GAA and 0.926 save percent. Brkin also appeared in four games in the ECHL with the Fort Wayne Comets that season, winning 2-2-0-0 with a GAA of 3.06 and a save percentage of 0.869.

The Rush played three games in three nights against the Wichita Thunder in Kansas this week, starting Thursday.

Homicide survivor speaks out after father was killed in 2021, the deadliest year on…

For one night, the coaches join the Tucson Roadrunners roster | road runner