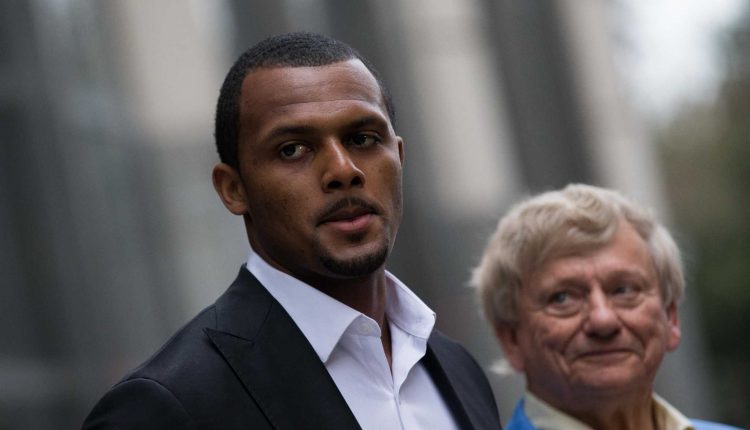 Deshaun Watson, attorney Rusty Hardin and agent David Mulugheta were relieved Friday when a grand jury elected not to indict the quarterback on criminal charges after several massage therapists accused him of sexual assault or harassment.

The Texans also were ready to move on. The grand jury’s decision means the most difficult legal hurdle has been cleared, and they finally might be able to trade Watson after an ordeal that began in January 2021 when he demanded to be traded.

Hardin reiterated Friday what he’s been saying for weeks, that if Watson were cleared of criminal charges, teams would try to trade for him without settlements in the 22 civil suits accusing him of sexual assault, misconduct and harassment. The Texans hope he’s right.

General manager Nick Caserio, who tried to trade Watson to Miami last season, will attempt to get the best possible deal. All we know for sure is Watson won’t be traded to Indianapolis, a member of the AFC South that plays the Texans twice each season.

Seattle, Carolina, New Orleans and Tampa Bay have shown interest in him. Watson used his no-trade clause to reject Philadelphia last season, but the Eagles could make another run at him. The Eagles have three first-round picks and could put together an attractive trade package.

Watson was almost traded to the Dolphins last season, but Miami general manager Chris Grier said at the combine the door was closed on the Dolphins’ interest in Watson because they were happy with Tua Tagovailoa going into his third season.

Pittsburgh needs a quarterback to replace Ben Roethlisberger, and coach Mike Tomlin hired Brian Flores as an assistant last month. Flores, who is suing the NFL for racial discrimination in its hiring and firing practices, was the driving force behind Miami’s interest in Watson last season.

Seattle coach Pete Carroll turns 71 this year and isn’t interested in a rebuild. Expect the Seahawks and Panthers to vigorously pursue Watson.

Carolina was one of the teams that planned to make an offer last season but put its interest on hold because of the civil law suits and investigations launched by Houston police and the NFL.

Teams pursuing Watson also have financial burdens that must be addressed.

Watson, 26, enters the first year of his four-year, $156 million extension that included a $27 million signing bonus that was amortized at $5.4 million a year over the life of the contract.

Something to keep in mind is that teams interested in Watson will have to clear space to handle his $35 million cap figure this year. They ask Mulugheta to restructure the contract, turning base salary into a signing bonus to lower might this year’s cap figure.

If the trade is before June 1 — and it surely will be — the Texans will add $16.2 million in dead money but will clear $24.2 million on the cap. That would give Caserio more money to re-sign players and add free agents.

Because Caserio has been at the forefront of the Watson controversy, you know he wants to trade the quarterback as soon as possible.

Last season, eight teams initially showed interest in Watson when he issued his trade demand but backed away when his legal problems mounted.

Watson, who has a no-trade clause and can veto any team, should give Caserio more than one option, a problem last season when Miami was the only team he approved.

That deal for three first-round picks and selections in the third and fifth rounds couldn’t be reached because Dolphins owner Stephen Ross demanded Watson settle all 22 civil suits, which he couldn’t do before the Nov. 2 trade deadline.

Watson can be traded as early as 3 pm Wednesday when the new league year begins and the annual free agent frenzy kicks off.

Watson, 26, still has legal obstacles to overcome. If he reaches settlements with his accusers and is able to get nondisclosure agreements, he can put his legal issues behind him.

A team trading for Watson also will want to know what action, if any, commissioner Roger Goodell will take. He might suspend Watson, which means he wouldn’t get paid for the games missed, or he may decide that because the quarterback sat out 17 games last season, there’s no need for a suspension.

No matter what team acquires Watson, he’s going to be in for a difficult time at first. Media — and social media — are going to create an initial firestorm of controversy.

Without settlement agreements, his accusers would be free to tell their stories to the media in Watson’s new city and to the national media that cover the NFL.

Teams calling Caserio understand what’s at stake. According to people close to the situation, they’re preparing to make offers without the civil suits being settled, and they’re content to let Watson continue to deal with those issues.

A best-case scenario for the Texans is Watson approves two or three teams. That way, Caserio gets them bidding against each other, and the Texans come away with a package that at least equals what Denver surrendered for Wilson.