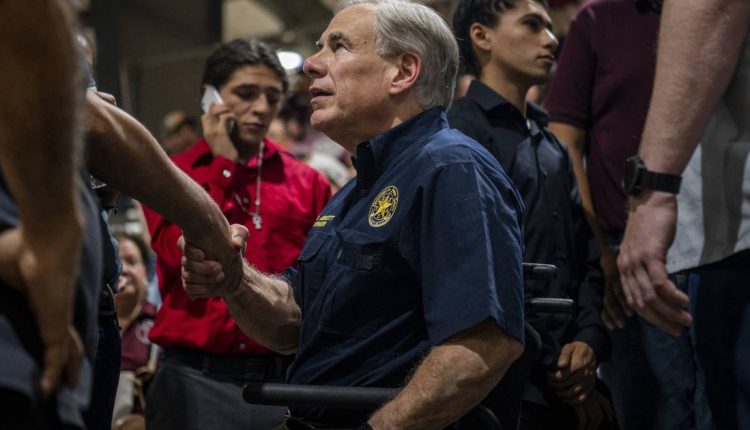 Leave it to the supposedly serious Gov. Greg Abbott of Texas, faced with the unspeakable horror of 19 children and two adults slaughtered in one of his state’s elementary schools, to try to deflect attention to one of the right wing’s favorite issues, crime in Chicago.

Have you no shame, sir?

“I hate to say this but there are more people who are shot every weekend in Chicago than there are in schools in Texas,” Abbott told reporters Wednesday after the tragedy in Uvalde, where the shooter also died.

“And we need to realize that people who think that, well, maybe we can just implement tougher gun laws, it’s gonna solve it. Chicago and LA and New York disprove that thesis,” the Republican governor said at Robb Elementary School where the attack took place. “So, you’re looking for a real solution, Chicago teaches that what you’re talking about is not a real solution. Our job is to come up with real solutions that we can implement.”

And the solution is …?

I’m still waiting. But first, while I will let Los Angeles and New York speak for themselves, here’s a brief bite from Chicago Mayor Lori Lightfoot’s rebuttal:

“He’s obviously trying to burnish his credentials for what was likely a run for president,” the Democratic mayor said of Abbott at her own news conference that day. “It’s a long-standing Republican trope to try to put a city like Chicago in their mouths and criticize us. But the fact of the matter is that guy needs to focus on taking care of business there.”

In other words, to paraphrase Will Smith after he smacked Chris Rock at the Oscars: Keep my beloved blankety-blank city’s name out of your blankety-blank mouth!

gov. JB Pritzker was a bit more gentleman, but no less blunt in his response.

“Shame on you, @GovAbbott,” he tweeted and cited a report that found a majority of guns used in Chicago crimes came from outside Illinois.

Indeed, as much as Republicans and other Fox News conservatives love to make Chicago their “woke” whipping boy since the glory days of Barack Obama’s presidency, most of the guns confiscated by police in the Windy City came from other states, as Lightfoot and Pritzker were quick to point out — including Texas.

For example, the 2017 Gun Trace Report, a joint project of the Chicago Police Department, former Mayor Rahm Emanuel’s office and the University of Chicago Crime Lab, found 60% of firearms recovered by police originated from a dealer outside Illinois, with one out of every five guns coming from next door in Indiana.

Others were traced back to Mississippi, Wisconsin, Ohio, Kentucky, Georgia, Tennessee, Alabama and, oh yes, Texas.

Similarly across the country, states with tough firearms regulations tend to find themselves flooded by guns trafficked from neighbors that happen to have softer regulations — like Texas.

And, true to its legendary cowboy reputation, Texas also has the highest number of guns per capita of any state, according to the independent World Population Review.

Illinois didn’t even make the top 10.

But what about “solutions”? Abbott said Wednesday that the Uvalde school shooter had a “mental health challenge” and the state needed to “do a better job with mental health.”

Right. Yet, as The Texas Tribune reported, in April Abbott slashed $211 million from his state’s department that oversees mental health programs.

And the state also ranked last out of all 50 states and the District of Columbia for overall access to mental health care, The Texas Tribune noted, citing a 2021 State of Mental Health in America report.

Sen. Chris Murphy, a Connecticut Democrat, wasn’t buying the mental health dodge. Before his election to the Senate, he represented the Connecticut congressional district where another young gunman killed 26 children and teachers at Sandy Hook Elementary School in 2012.

After the Texas attack, he once again implored his colleagues to act against gun violence, adding, “Spare me the bulls–t about mental illness.”

“We’re not an outlier on mental illness, he said. “We’re an outlier when it comes to access to firearms and the ability of criminals and very sick people to get their arms on firearms. That’s what makes America different.”

Unfortunately, he’s right. “Mental health” has evolved from an important policy issue to just another handy way to avoid talking about gun safety. Meanwhile, the casualties mount up, even in grade schools.

Sign up here to receive Clarence Page’s columns by email as soon as they are published.

Clarence Page, a member of the Tribune Editorial Board, blogs at www.chicagotribune.com/pagespage.

Monica Barbaro on Phoenix and her rise in Top Gun: Maverick