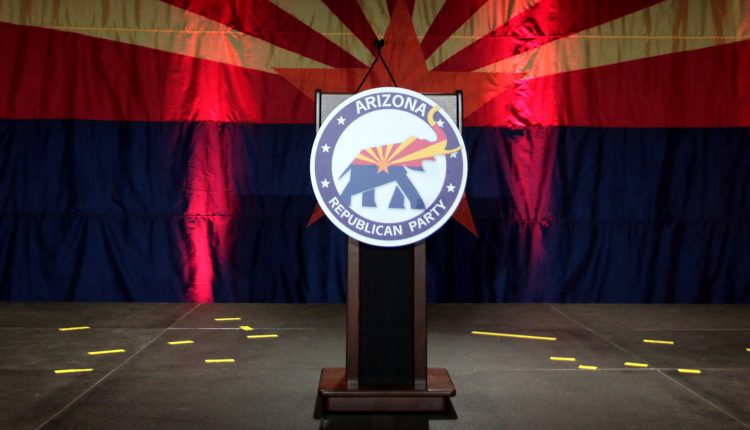 To ensure the “comfort” and “safety” of candidates, donors and party activists, the Arizona Republican Party is barring journalists from mingling with the crowd at its election night watch party and interviewing attendees, instead corralling reporters in the back of the room and imposing restrictions on who they can speak with.

“We don’t want the press going out and talking to people who are going out and having a good night,” AZGOP spokesperson Kristy Dohnel said in an Oct. 25 interview. She later hedged, saying restricting the media’s access was about “safety” and a “lot of things.”

In an email sent to local and national media outlets on Oct. 24, the state GOP laid out the rules for any journalists who want to attend the election night event at The Scottsdale Resort at McCormick Ranch. Chief among them is that “the press must stay in their designated area” on risers at the back of the hotel ballroom. Failure to do so “will result in the removal of credentialed press pass” and ejection from the event.

There are other restrictions on journalists. Any credentialed media must be checked in before 5 p.m. — three hours before election results are made public — and reporters will be subjected to a security screening. Then they will be escorted to the designated press area at the rear of the hotel’s Grand Coronado ballroom, where space will be limited and available on a “first-come, first-served basis.”

And interviews with party officials and candidates must be coordinated with Dohnel — and arranged prior to election night.

The email sent to media outlets included a prominent note saying it was “FOR PLANNING PURPOSES ONLY, AND IS NOT REPORTABLE OR SHAREABLE.” Dohnel did, however, later confirm the details when contacted by the Mirror.

When asked how journalists will be able to do their jobs if they can’t approach candidates or other attendees for interviews, Dohnel dismissed the concern, saying that it was “free” for print journalists to attend and that candidates’ spokespeople would be at the event.

There’s no real logic to this. People are trying to out-hate the media, and you somehow prove you’re more conservative by hating the media more. It’s really pathetic we’ve gotten to this place.

While it may not cost print and online outlets much, if anything, to attend, television networks will have to pay for access to power and necessities. The AZGOP is charging $300 for a hardline ethernet connection, $50 for wireless internet access, $1,000 for a 10×10 interview booth with WiFi and enough power for a local broadcast station, and at least $4,000 for the power needed for a national outlet with a larger team of journalists and producers.

Dohnel said the prices came from the hotel but would not provide the cost sheet from the hotel, saying it was an “internal document.” A call to the hotel for additional information was not returned.

“I don’t get it. I don’t understand the fear,” former Arizona Republican Party Chairman Robert Graham told the Arizona Mirror. With rules limiting access so severely, Graham didn’t understand why the media would even want to attend the party’s election night event.

“We weren’t afraid of anything. We trusted our candidates,” Graham said of his time as chairman during the 2014 and 2016 elections, adding that the party did media training with candidates. “We wanted people to see the diversity of our party.”

During his tenure as the chairman, Graham said he didn’t recall charging the media for election night events.

The prices and limited access stand in stark contrast to the Arizona Democratic Party’s election night event, which is charging $450 for TV stations to access a mult box, power strip, secured parking, an 8×6-foot individual press staging area and an area to hang a news organization’s banner.

The Democratic Party is not imposing any restrictions on where journalists can be or who they can talk to.

“It’s a shame that money they are charging members of the media to attend their event is likely just going to pay for the litany of legal bills for all of the frivolous lawsuits Kelli Ward and the AZ GOP has brought forward,” the Arizona Democratic Party said in a statement to the Mirror. “The Arizona Democratic Party is proud to partner with a union hotel for our Election Night event, and provide at cost accommodations to members of the media to cover the celebration.”

Dan Shelley, President and CEO of the Radio Television Digital News Association said in a statement to the Mirror that a “healthy American democracy requires a robust free press as an active part of the political process.”

“These measures taken by the Arizona Republican Party are overly restrictive, at best, and antagonistic, at worst,” Shelley said. “Reporters should be free to engage with politicians and their supporters as part of the political process. Restricting the movements of journalists flies in the face of the First Amendment. Politicians, and their supporters, should not fear questions from journalists. If they do, perhaps they need to reevaluate.”

Graham agreed, adding that the party needed to focus on winning elections instead of making enemies of the media which should instead be an ally for carrying the party’s messages.

“There’s no real logic to this. People are trying to out-hate the media, and you somehow prove you’re more conservative by hating the media more,” Graham said. “It’s really pathetic we’ve gotten to this place.”

2 Reasons the 2023 Hyundai Tucson Limited Is Worth Every Penny

KHN’s ‘What the Health?’: Voters Will Get Their Say on Multiple Health Issues