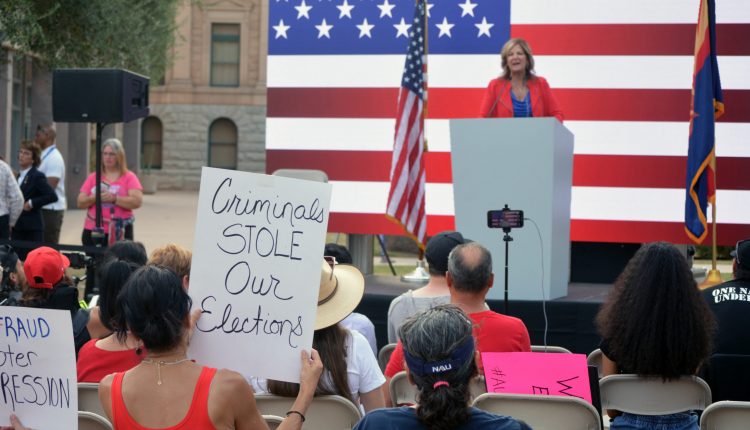 The ‘audit’ found no evidence of fraud. But Republicans say it’s the smoking gun they wanted.

The long-awaited results of the Arizona Senate’s “audit” of the 2020 election in Maricopa County unequivocally concluded there was no evidence of fraud, but that didn’t stop leading Arizona Republicans from claiming that the election review was the smoking gun needed to prove the claims they’ve been repeating since last November.

“Today is vindication day,” Rep. Mark Finchem, R-Oro Valley, told a crowd of about 80 people who gathered on the Capitol lawn immediately after the “audit” was presented to the Senate Friday afternoon.

Finchem, who has been at the forefront of efforts to undermine the results of the election, said that the hearing “vindicated” him for a trip he made to Washington D.C. on Jan. 5 to deliver an “evidence book” to Arizona GOP Congressmen Paul Gosar and Andy Biggs.

When you see (the news), just turn off the TV.

In reality, the “audit” found no evidence of the massive fraud that Finchem and many other Republicans, led by twice-impeached former President Donald Trump, have said changed the outcome of the election. The auditors made numerous claims of impropriety, but provided no proof that any laws were broken and did minimal investigation of the alleged anomalies.

The Arizona Republican Party billed the rally after the hearing as a “debrief,” but many politicians — most running for re-election or a higher office — gave stump speeches or repeated unsubstantiated claims about the results of the “audit,” particularly allegations that there were cybersecurity lapses and the election was thus not secure.

In his presentation to the Senate, CyFIR CEO Ben Cotton claimed election files had been deleted. Maricopa County officials said nothing was deleted, but the files were instead archived for preservation and to free up space on the election machines.

Sen. Sonny Borrelli, a Lake Havasu Republican and vocal proponent of false claims that the 2020 election was rigged against Trump, seized on Cotton’s claim.

“By deleting files, plain and simple you nullified an election,” he said as the crowd erupted in cheers and applause.

A fired up Borrelli made a number of claims to the audience, saying that the Maricopa County Board of Supervisors violated federal law and that they will be “held accountable.”

“Do we think that this was a free and fair election?” Borrelli asked the crowd, which enthusiastically shouted back, “No!”

Borrelli has been a major supporter of the “audit” efforts, appearing on right-wing media channels drumming up support for the Senate’s efforts. He said media outlets that reported critically on the “audit” did so unfairly, and falsely claimed that they “worked with” the Maricopa County Board of Supervisors, which refused to cooperate with the Senate’s review.

“When you see (the news), just turn off the TV,” Borrelli said. “Just don’t listen to certain radio stations anymore.”

Armed milita members patrolled the Arizona Capitol grounds before the Senate released results of its “audit,” which found no evidence of fraud in the 2020 election. Photo by Jerod MacDonald-Evoy | Arizona Mirror 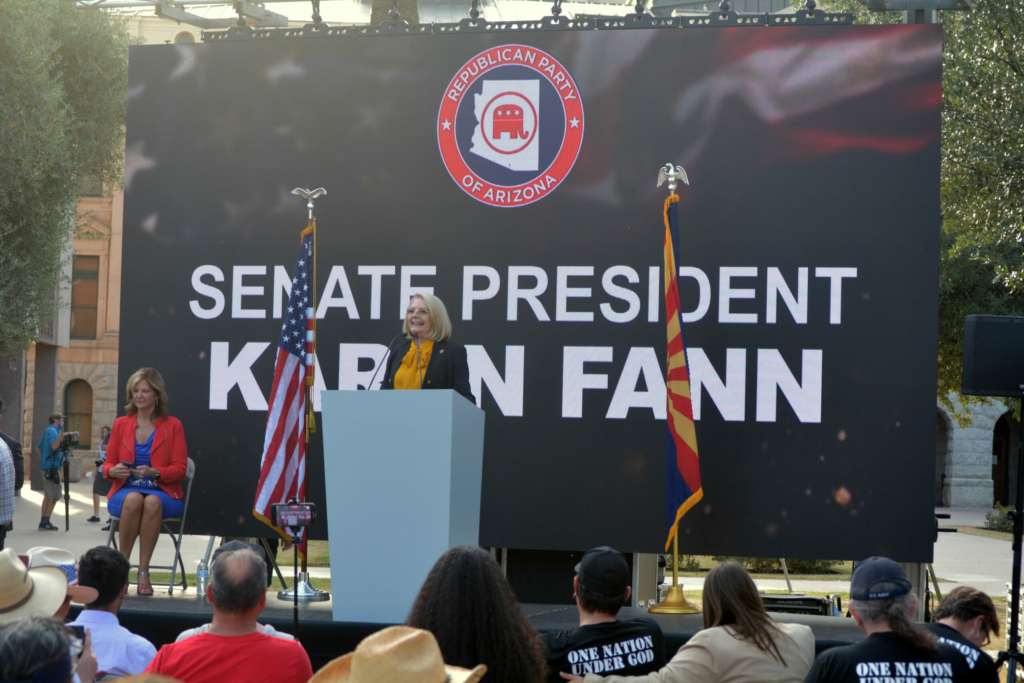 Senate President Karen Fann speaks to a crowd of Republicans who believe the 2020 election was rife with fraud after the Senate released results of its “audit,” which found no evidence of fraud. Photo by Jerod MacDonald-Evoy | Arizona Mirror 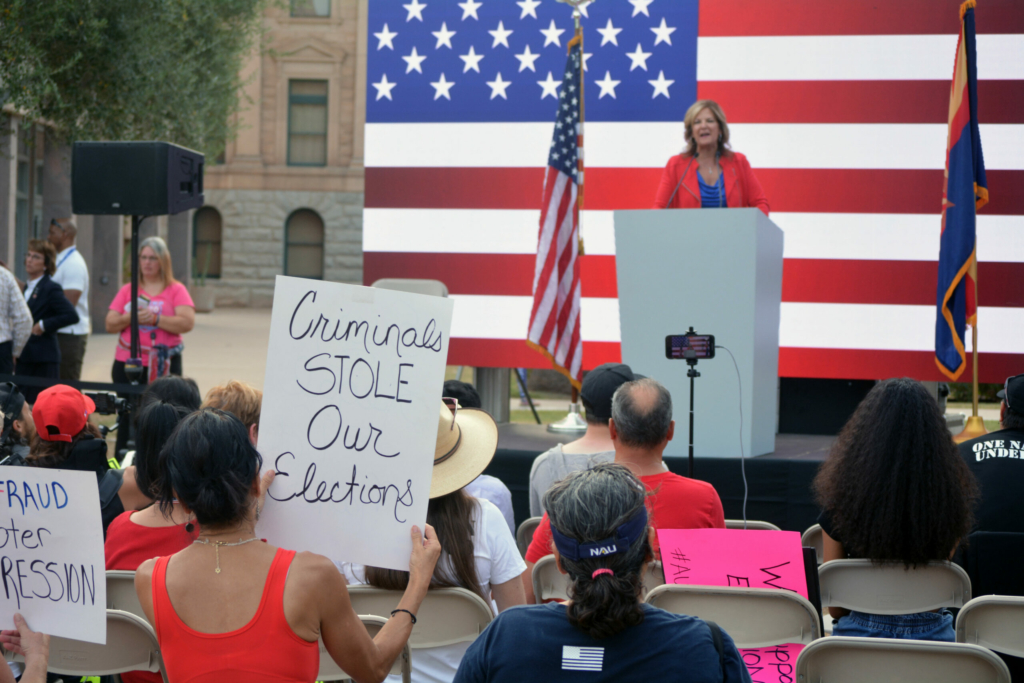 Arizona Republican Party Chairwoman Kelli Ward speaks to a crowd of Republicans who believe the 2020 election was rife with fraud after the Senate released results of its “audit,” which found no evidence of fraud. Photo by Jerod MacDonald-Evoy | Arizona Mirror 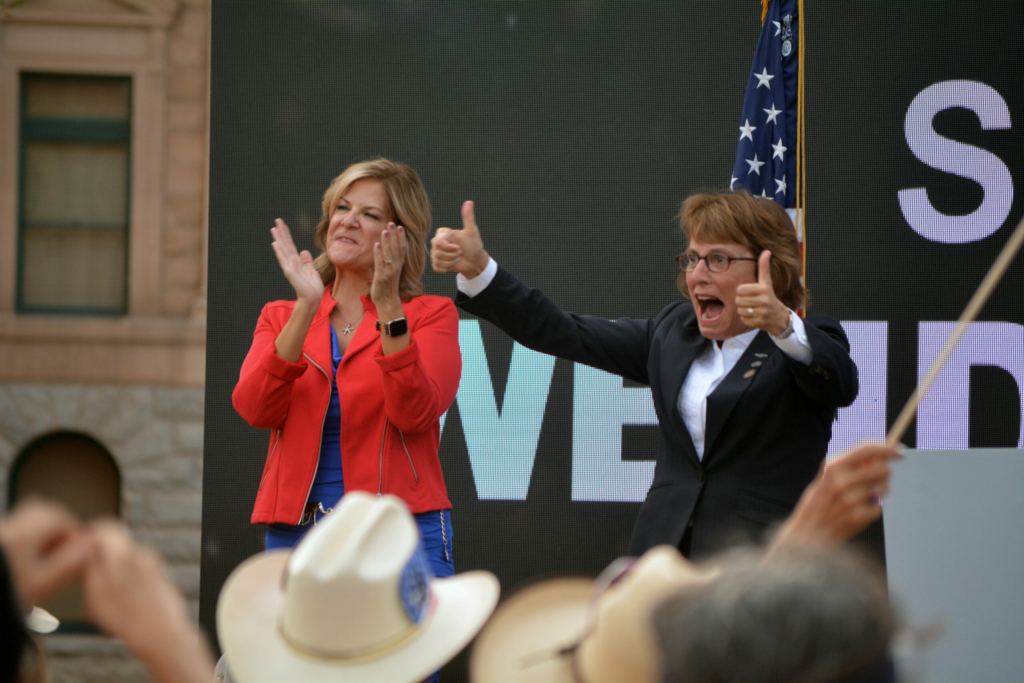 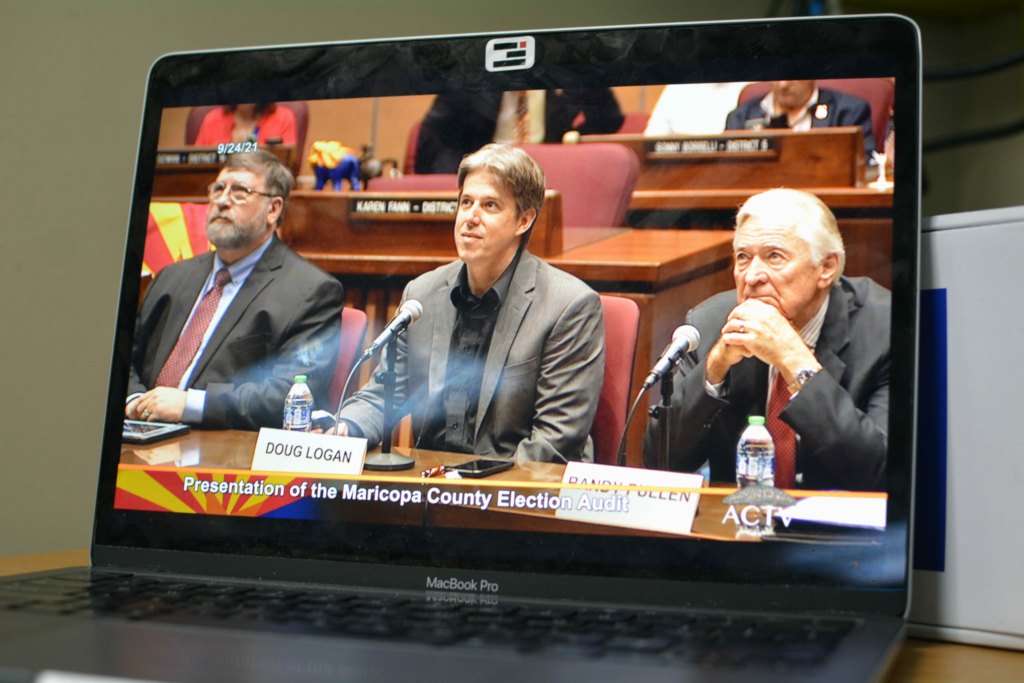 Other elected officials pushed supporters to ignore any claims that the “audit” didn’t prove fraud.

“No matter what the left says, we will keep this in the narrative,” Sen. Wendy Rogers, R-Flagstaff, said, adding that they will hold whoever is responsible for the invented election fraud “criminally liable.”

Supporters on Rogers’s Gab account during the audit hearing Friday posted messages about killing members of the Maricopa Board of Supervisors because of the audit.

Rogers, calling the 2020 election “corrupted,” announced that she and a coalition of Republican  lawmakers in other states who similarly believe baseless claims are calling for forensic audits in all 50 states due to the results of Arizona’s “audit.” When she said she will continue to push for Arizona to decertify the results of the 2020 election — something legislative attorneys say is not possible — the crowd began chanting “USA.”

The 2020 election has been deemed by election experts and cybersecurity officials to be the most secure election in United States history.

The only speaker at the AZGOP event who did not outright say they believed there was fraud, call for the decertification of the election or say the “audit” vindicated Trump supporters was Senate President Karen Fann.

“You guys are the true heroes,” Fann said to the crowd, which also included some volunteers who worked on the “audit” itself.

Fann reiterated that the Senate will be handing over the information it collected to Attorney General Mark Brnovich.

Other lawmakers, such as Rep. Walt Blackman, R-Snowflake, said that the audit is a signal for future legislation.

“Now we’re going to find out who has backbone and who doesn’t,” Blackman said. “This is when the work starts, America.”

Blackman, like several other speakers, called for arresting county leaders and election officials.

“If you tamper in an Arizona election, you should stand behind bars,” Blackman said.