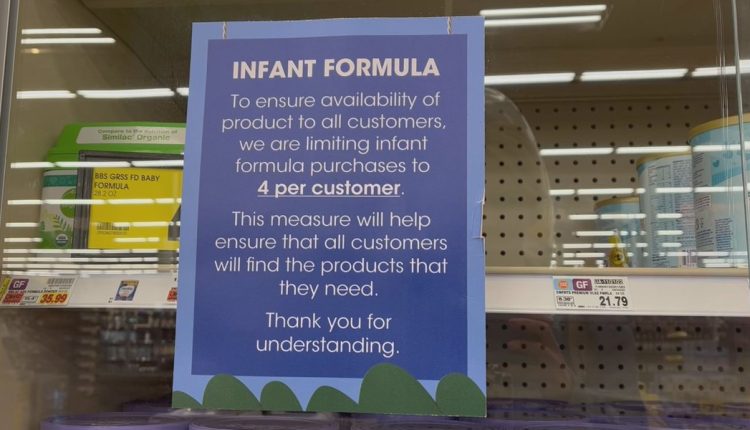 The baby formula crisis still isn’t over. Here’s what state agencies are doing for Tucson families

The nationwide supply shortage isn’t over and the scarcity of formula is still impacting families in southern Arizona.

KOLD gets answers on what state agencies are doing to support families, as KOLD Investigates access and affordability of baby formula.

While supplies have improved since the peak of the crisis in May, many families in Tucson are still scrambling to find popular brands.

“This is not good,” said Simone Darrow who has two grandkids.

Since the formula shortage began in February, the shelves at her local Walmart in Marana have often been bare.

“It was ransacked,” said Darrow. “People came in and just bought a bunch.”

At the Albertsons down the street, there are still limits on how much formula you can buy.

“It’s been a very challenging time for families,” said Monica Nicholas, program manager for the Women, Infants, and Children Program in Pima County.

Approximately half of all infant formula sold in the US is purchased with WIC benefits.

So what’s being done?

“Unfortunately, it’s difficult for them to locate the formulas,” Nicholas said. “That’s why when clients go to the store we ask them to reach out so we can help them get benefits for what’s actually at the store.”

According to the Arizona Department of Health Services, the state’s current contract is with Abbott, the maker of Similac.

In February, Abbott shut down a Michigan manufacturing plant and issued a formula recall that set off the nationwide shortages and price hikes, significantly impacting Arizona families.

In May, Congress passed legislation waiving restrictions on the type of formula WIC recipients can buy.

“But sometimes we find that families don’t call because they don’t know they can change their benefits,” Nicholas said.

This year, the Arizona WIC program served 130,000 people per month on average. Of those, about 8,800 are formula-fed infants.

“Here at the hospital, we even experienced a need for a quick pivot,” said Christina Valentine, a professor and an attending neonatologist at Banner University Medical Center in Tucson.

As the formula shortage continues, Valentine warns against homemade formula recipes or watering down formula to stretch supply.

Deficiencies in early nutrition, even switching to cow’s milk too soon, can have long-term consequences.

“The first 1,000 days of life is extremely important to get enough calories, protein, iron, zinc, not only for a child’s development for cognition but their mood, how they’re going to behave, how they’re going to pay attention, Valentine said. “So, it’s important not only for growth but how that little person will become an active child and adult.”

With the FDA allowing formula to be imported and president Biden’s “Operation Fly Formula” bringing powdered formula from overseas, Darrow hopes a crisis like this never happens again.

“What if there are more problems with the formula if they have more recalls? That’s the scariest thing to me,” she said.

Nicholas encourages people to call the WIC office to see if they qualify for benefits, income requirements are not as low as people may think.

On Friday, Abbott labs announced a new formula recall because of a problem with its bottle caps. The company said the tops may not have been sealed completely and could cause the formula to spoil.

Most of the affected products are distributed to hospitals and doctors’ offices.

The recall does not include any powder formulas and Abbott says it should not affect the overall supply.