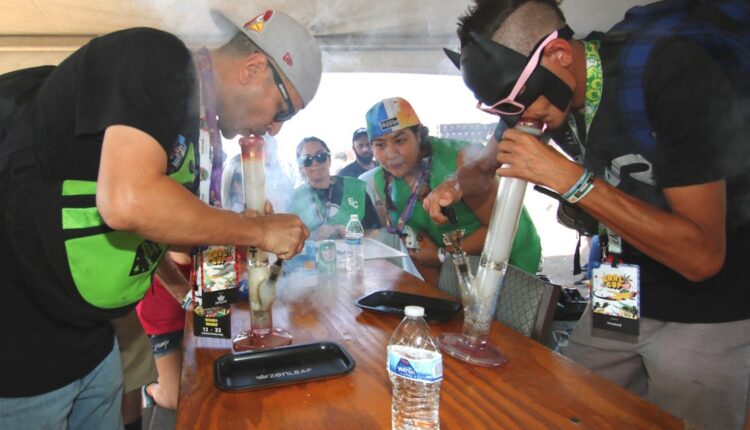 The Best Cannabis Moments in Metro Phoenix of 2022

Cannabis in Arizona is so much more than getting baked.

It’s celebrities, an endless calendar of festivals, innovative new products, and a host of historic moments. There’s also a serious side. It’s big money with lucrative licenses, expunging past overzealous prosecutions, and remembering that the rest of the world doesn’t share Arizona’s love of recreational weed. (We’re thinking of you, Brittney Griner.)

Here are nine moments we took note of from covering cannabis in the Valley this year.

Antonia Renee was among the first customers as the Mint Cannabis store in Guadalupe opened 24 hours.

Around the clock pot

In October, Mint Cannabis made more weed history in Arizona. That’s when their flagship location in Guadalupe began staying open 24 hours a day on Thursday, Friday, and Saturday. When midnight arrived, a bullhorn sounded, the staff opened the glass doors to the store, and the first 20 patrons were rushed into the 12,000-square-foot dispensary, which is the largest in the state. They were greeted with a DJ, contortionist, food, and plenty of swag. The moment was not only a game changer for Mint, but for cannabis consumers. Don’t tell Ric Flair, Mike Tyson, Jim McMahon, Wiz Khalifa, Snoop Dogg, Cheech and Chong, and Shavo Odadjian that Arizona’s billion-dollar pot market is softening. The celebs, artists, and retired professional athletes brought their brands to the Valley in 2022. They were joined by Kiva Confections and Green Dot Labs, both out-of-state companies, that announced plans to dive into the Arizona cannabis market. Why? The stuff jumps off shelves. “We sell a lot of those [Snoop Dogg-branded] strains, probably a pound or two a day just for those couple strains,” Dalyn Oakes from JARS Cannabis told us in July.

In Maricopa County, 10,000 pot charges have been cleared from records.

Prosecutors in Maricopa County routinely took a hard-line stance against low-level pot offenders. But thanks to Proposition 207, that started changing. The ballot initiative legalized recreational cannabis in Arizona and set the expungement process into motion when it passed in November 2020. Since July 2021, anyone in Arizona with a qualifying pot charge could petition the courts to scrub it from their record. By March 2022, more than 10,000 people convicted of low-level weed offenses had their records cleared. Yet advocates said that’s just a dent in the number of people who are eligible for expungement. 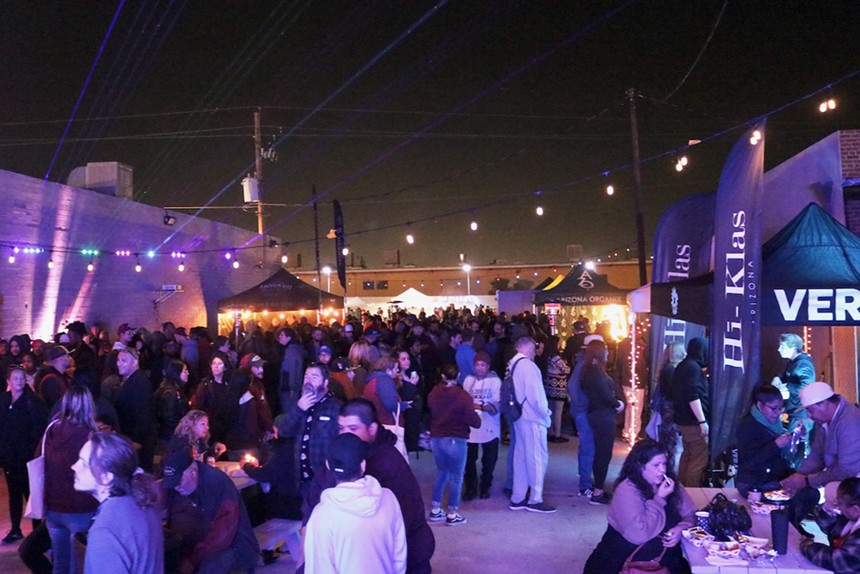 Arizona Organix marked its 10th anniversary with a day-long celebration on December 10.

A Big Birthday for Arizona Organix

When a Glendale business became the state’s first licensed medical marijuana dispensary in 2012 — two years after a voter-approved 2010 law made it possible — it dove head-first into hostile territory. Cannabis was a different beast a decade ago, and businesses faced hostile prosecutors and lawmakers. Fast forward 10 years, and it’s little wonder that when Arizona Organix celebrated its 10th anniversary, the party would be a day-long affair that attracted thousands of customers, plus Cheech Marin, lowriders, swag, and of course, weed.

Parties Across the Valley

You might think catching a cannabis vibe is a sedate experience. You’re only partially correct. It’s also an outdoors thing with thousands of your closest cannabuds. Across the Valley, and even stretching to Sedona, festivals celebrate weed all year long. The weed-tastic fun includes the new kid on the block, Buds-A-Palooza in April, as well as the Errl Cup, which has been happening since 2015. Food trucks and free weed? Mangia Ganja has that covered as the first cannabis-consumption-friendly food truck festival in Arizona. In May, some 7,500 flocked to the Phoenix Cannabis Awards Music Festival, which awarded trophies and plaudits across 56 categories. And Cannaval brought some music and a cannabis vendor expo to the west valley.

WNBA All-Star and Phoenix Mercury legend Brittney Griner said she’ll return to WNBA when the season opens in May.

When seven-time WNBA All-Star and Phoenix Mercury legend Brittney Griner was arrested in a Russian airport in February, the reaction here was swift. After all, the Mercury selected the 6-foot-9 center with the No. 1 overall pick in 2013. She was red-hot entering the draft after leading the Baylor University Lady Bears in 2012 to the first 40-0 campaign in women’s college hoops, capped by an NCAA women’s title. Griner later won two Olympic gold medals on the US team, and a WNBA championship with Phoenix in 2014, her second season in the league. Fans rallied and called for release, which didn’t come for months after her arrest on charges of carrying vape cartridges with cannabis oil. But she was freed on December 8 and returned to the US She’s since said she’ll return to the WNBA when its new season opens on May 19.

In April 2022, 26 applicants hit the jackpot and were awarded social equity cannabis dispensary licenses in Arizona.

In April — after months of lawsuits, heated debate, and anticipation — 26 applicants hit the jackpot and were awarded social equity cannabis dispensary licenses in Arizona. It was a historic moment for the cannabis industry in the state, even if the majority of winners were applications backed by major cannabis companies or investors. The program, which was meant to give back to communities harmed by the drug war, was open to people who fit a series of requirements, including income level, past pot charges, and ZIP code. Each entity that applied had to be majority-owned by someone who met the state’s social equity requirements.

Arizona’s Sweet Dreams Vineyards has come up with an alcohol-free cannabis-infused wine.

Step aside, kombucha. Cannabis-infused beverages are bubbling over and it’s got to be one of the tastiest innovations in Arizona’s young recreational cannabis scene. Wellness cannabrands boast of low-sugar content and antimicrobial properties as they expand their market share while pot-infused, alcohol-free wine and margaritas are making their mark, too. The surge in cannabis-infused beverage sales is fueled by growing consumer demand for wellness drinks, alternative ways to consume cannabis, and an influx of investment from beverage manufacturers looking to capitalize on the greater accessibility of cannabis. “It’s something more and more people are coming in asking for,” Sarah Mahoney, store manager at The Hemp and CBD Co. in Gilbert, told us in March.

There’s no arguing that cannabis is big business in Arizona. Yet marijuana companies spend considerable time and money to puff, puff, pass not just blunts but love for those who rely on charity for survival. Non-profit Tom’s Palms, with help from Nature’s Medicines Dispensary and other cannabis companies and dispensaries, provides thousands of meals, clothing, toiletries, and help getting IDs to people in need. Curaleaf’s Feed the Block program picked Nourish Phoenix and United Food Bank as its beneficiaries this year. And ahead of Thanksgiving and Christmas each year, Mint Cannabis surprises families in need with cash. “This [cannabis] community is open to every type of human and every type of love,” Sheena Williams, vice president of Tom’s Palms, told us in January 2022.