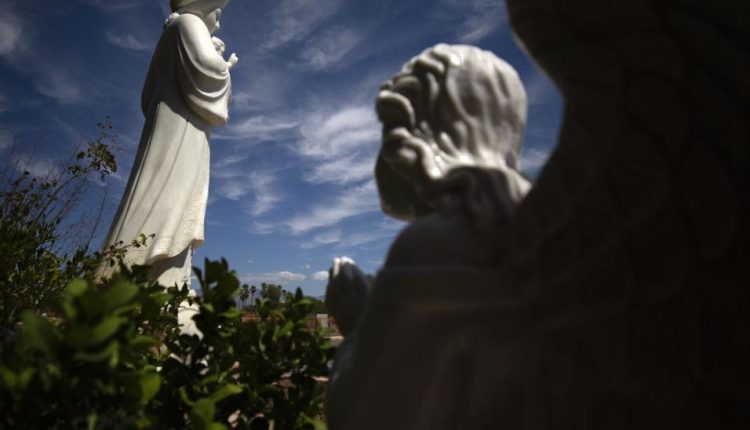 The parish of Our Lady of La Vang in the center of the city will merge with St. Frances Cabrini on the north side – making Cabrini financially solvent and La Vang getting a larger church to keep up with its growth, Bishop Edward J. Weisenburger of of the Roman Catholic Diocese of Tucson announced to parishioners over the weekend.

In letters to parishioners, Weisenburger wrote that he expected the merger to become official around December 1st.


Courtesy of the Roman Catholic Diocese of Tucson

For the time being under the merger, the Church would remain St. Frances Cabrini, 3201 E. Presidio Road, and its pastor would be Rev. Francis Dien Tran, the current pastor at Our Lady of La Vang, 800 S. Tucson Blvd.

In an interview, Weisenburger stated that Our Lady of La Vang “will live, practice the faith and lead St. Frances Cabrini under the full responsibility of the pastor and the leadership council”.

St. Frances Cabrini has lost parishioners over the years and didn’t bring in enough income to pay his bills and had to dig into his savings, Weisenburger said.

Weisenburger explained that if the congregation wants to change the name of the Church of St. Frances Cabrini in the future, an application must be made to the Vatican, which is authorized to do so.

“When a Catholic Church is given its name, it is like a baptized person,” he said.

The bishop also said that the statue of Our Lady of La Vang will be moved to St. Frances Cabrini as part of the merger. Our Lady of La Vang serves mostly Vietnamese Americans. In the 1970s and until the 1980s, the diocese supported Vietnamese refugees through its resettlement programs. The namesake of the church was an apparition of the Mother of God in 1798, when Catholicism was restricted and Catholics were persecuted in Vietnam.

“In the past few years we have closed churches across the country. The closure and alienation of community property, as we have seen in the past few years at the Benedictine monastery (convent) in Tucson, is painful for many, ”the bishop wrote in a letter to the parishioners of St. Frances Cabrini. “Not wanting to go in that direction, I turned to the parish of Notre-Dame de La Vang, which is working towards buying or building a new church.

“After extensive communication with the leadership of both parishes, I now believe that a merger with St. Frances Cabrini under the full direction of the pastor, the company board and the parish councils of Our Lady of La Vang will lead to a win-win. Situation for both communities, ”wrote Weisenburger.

He said he had met with the joint parish and finance councils of St. Frances Cabrini and both unanimously recommended the merger. “NS. Frances Cabrini remains an active Catholic parish with at least one weekly mass in English for parishioners who wish to stay, while Our Lady of La Vang now has a facility to meet their growing needs,” Weisenburger wrote.

The bishop stated that “parishes are usually territorial in nature – with defined boundaries,” but that “Our Lady of La Vang is an exception to canon law as it is a personal parish responsible for all Vietnamese Catholics living in Tucson “. He said that as part of the merger, the pastor of Our Lady of La Vang will “continue the pastoral service for the Vietnamese immigrant population, who are mainly refugees from the American involvement in Vietnam, while at the same time continuing the community work for Catholics within the territorial Borders of St. Frances Cabrini. live community. “

In a letter to the parishioners of Notre-Dame de La Vang, Weisenburger wrote that “he has witnessed the growth in your community and the need for a larger church and space for religious education and community activities. I have increasingly come to the conclusion that it would be a grave mistake to close the parish of St. Frances Cabrini and sell it when it comes to a parish complex that might prove perfect for your needs. “

The bishop also mentioned that the leadership resulting from the merger may result in some English ministries at St. Frances Cabrini and their continued “excellent” work of the Society of St. Vincent de Paul, a lay Catholic organization, to provide social services to those in need offers . In the letter, Weisenburger also explains that Our Lady von La Vang’s executive councils have unanimously recommended moving the merger forward.

In the future it is expected that the land on which Our Lady of La Vang is located will be sold and the money will go to the parish of St. Frances Cabrini.

Weisenburger said he did not expect any further mergers or church closings in the diocese this year or in the near future. The diocese, the fifth largest diocese in the continental United States, has an area of ​​42,707 square miles, according to the diocesan website. It consists of nine counties with an estimated 300,000+ Catholics served by 78 parishes, dozen of missions, and 25 Catholic schools. Besides Pima County, the other counties are Pinal, Santa Cruz, Cochise, Graham, Gila, Greenlee, La Paz, and Yuma.

Pinal County is growing rapidly, and a study done a few years ago shows it will need four to six new parishes in 10 years, Weisenburger said. It now has about 10 Catholic parishes. “We are working on a development plan that would be a huge undertaking. We have to consider buying land and building work. We would plant one church at a time, ”he said.

Vail, Marana, and Sahuarita each have Catholic churches, and those communities are growing, Weisenburger said.

“We are examining all options, including the possible building of new churches or the expansion of existing churches.” He said there is still no timeframe for development plans.