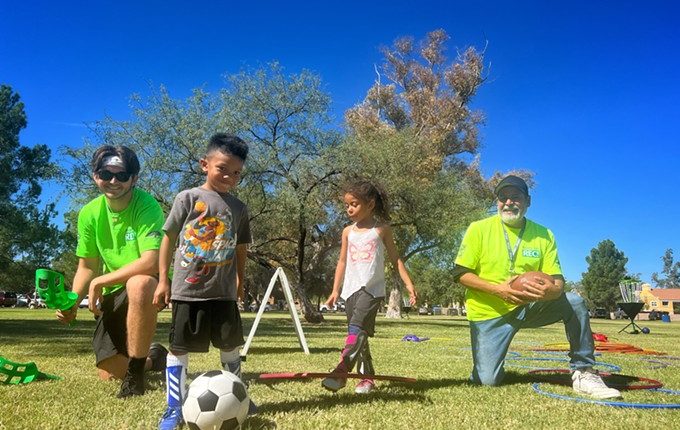 The kids are united! | Tucson Salvage

The football slides off his fingertips, and Federico (“Fred”) Torrez shouts, “I know! Butterfinger hands.” A hot wind gusts and his forehead glistens with sweat.

Children step in and out of Torrez’s shadow, cut across the green field, air seasoned with Bermuda grass and the previous night’s rain. Kids toss cornhole bags far and away from their targets, a set of 5-year-old twins show off hula hoop skills. Tiny legs push tricycle peddles on a sidewalk, hair clips on careening girls catch the sun. Several parents mill about in tree shade, and the children, grade-school age and younger, Native, Hispanic, white, Black, special needs, laugh and screech, exuding the kind of joyful momentum that makes the goddamned world go ’round. Kids don’t segregate over skin hues, don’t know prejudice, there is no prejudgment, just total strangers who straightaway engage with one another in a devoted way, gliding above adult-world presets to discover common ground on, say, a giant Connect 4 game.

The two overseers of this controlled chaos, Torrez, a 55-year-old Hispanic gentleman, and an 18-year-old half-Russian kid, Ian Sommer, wear neon lime-green uniform shirts emblazoned with Ready, Set, Rec! logos, and their movements, in the morning sun, click together seamlessly in the familiar track of children. Theirs is an uncanny ability to inspire kids to share, catch, chuck, score and spin. Today, in a section of Tucson’s Freedom Park, on a few dozen mobile games and toys, which rise from the grass with inexorable gravitational pull, the work partners engage 40 or so children in two hours.

Ready, Set, Rec!’s home base is the Tucson Parks and Recreation Department. The program launched early last year after Mayor Regina Romero and the City Council signed off, using federal CARES Act funds to pay for six matching vans, one for each ward of Tucson, and equipment. Bigger events figure in too, where, sometimes, all six vans appear. Each is essentially a self-contained, two-person mobile recreation unit that heads out daily to rotating area parks to engage children outdoors for free, a few hours at a time. In some cases, it is a chance for children to play on things their families could never afford. And it is COVID-safe. From this vantage, it is pretty genius.

Torrez and Sommer are here because, well, they are paid to be, but their presence accounts for more. For them, the work is both restorative and inspiring, even healing. Because of that, the two transmit a certain empathy and energy to the kids. In these moments it is hard to imagine Torrez and Sommer attending to their own lives after their work is done here today, even as wildly different as they are. Either one of them would make great teachers.

“It really is about how you feel the effects of the people around you,” Sommer says, “a perfect example is working with kids and we want everyone to play with us, even the parents, that’s when it’s the most fun.”

He tells of the easily frightened kids who “runaway screaming” when drawn near. “You learn how to approach kids, earn trust, and you develop ways to interact,” he says, pauses. “You’re very influential, really.”

Summer steps to the side, settles onto a shaded picnic table. Torrez takes solo over the playing field, a lull in the number of children circling at the moment, yet the endeavor still requires specific attention. Sommer, wearing sunglasses, bandana headband, is slender, and he’s built like the high-school tennis star he was. A few teen pimples controvert manly facial hair. Things about Sommer learned quickly: He introduces himself in Russian. When he reverts back to English, it is obvious his words rise from a well of self-assurance. A tennis injury killed his scholarship to a good school (“I was set on moving to Cali, everything paid for; that was a low point”). He was an award-winning theater kid at Sabino High, and children at some parks recognize him; he toured Tucson elementary schools in his high-school improv group. He wears a necklace he got after discovering his old girlfriend cheated on him with a friend. It displays a feather dangling from an antique coin with a Native American image. For him it means he must “keep pushing forward, so you can do more good.” He’s been at this city job for a year and a half, before that McDonalds. One night while working the drive-thru window he got robbed. He didn’t feel anything; no fear or panic, no sadness or even alarm, as if his life slotted into nothing. “I could tell the other guy wasn’t feeling anything either. It’s no way to live.” The teenager is self-aware enough to understand that fast-food work numbed him out completely; work had to be better. And he got the job with the City. He carries himself like a guy much older than one who graduated high school in May this year, like he’s armed with deeper perceptions of the human spirit and maybe a comprehension of how cruel some people can be. He ought to know, not long after his mother, Roza Adams, arrived in Tucson, Arizona around ’01, she married an addict who would, among other high lowlights, steal her money, and she would starve because of it, blackout in the shower when she was pregnant with Sommer, her only son. She left him.

Sommer idolizes his mother, and tells how his mom had left her Moscow home at 21 after college. She landed in New York City not knowing a lick of English, which she taught herself. Stretches of Ian’s Tucson childhood memories involving his mother being home are scarce because she had to work, hard. Waitress, bank teller, anything. He even attended Tucson City Parks programs, similar to the one he works now.

He doesn’t speak to his biological dad, who now lives in another state. (“It’s the trauma to my mom I can’t really look past.”)

In the distance, Torrez chats with a man pushing a stroller, the rush of kids has waned.

Sommer continues, “Here’s where my mom gets cool. She learned photography, and would do side gigs; she shot weddings, school yearbooks, sports pictures, and she eventually entered real-estate school, graduated and worked for three different companies at the same time. She learned Spanish, is now learning Mandarin, while working seven days a week.”

Sommer attends college, business major. Keen to get into sales, he is thinking medical equipment, because, in a way, it contributes to the greater good. “I want to sell something that doesn’t make me feel bad afterwards.”

A minute later Sommer is jarred back to work when more kids randomly appear at the play things. He hops from the picnic table and breaks into a run. It is spectacle to see him engage the kids, the communication, the intuitive nature, the boundless, theater-trained kid energy.

“Working with kids,” he tells me later, “I often wonder about how people act, and why do they act that way. I think how people end up the way they do. Looking back, if my biological dad was still raising me, I wouldn’t be a good person. So, I often wonder when I watch these kids, how is their experience, and can I become a good step in that experience and what do I have to do? Within this short amount of time, it’s really about showing kids how to be respectful, how to have fun, how to share.”

Torrez and summer begin tearing down the sets, and retrieving the various balls, jump ropes and scoop-and-tosses, the kids still playing will have to move on soon. Torrez says the only toy they lost was a frisbee able to go 400 yards. “It went 400 yards, all right, we never saw it again.”

Torrez has six children of his own, ages 18 to 31, and eight grandchildren. He knows a thing or two about young people and it shows in kind. He shows some graybeard on his 55-year-old face. He grew up in California and Texas before settling on Tucson’s eastside with his family as a teen.

“I’m the only one in my family who doesn’t speak Spanish well,” He laughs. He remembers a time when his parents sent him to stay with his grandparents, who only spoke Spanish, so he could learn. He returned home and his parents said, “How’s your Spanish?” and he replied, “I don’t know, but they speak English now!”

I was with one of my daughters when I first met Torrez at another park weeks ago. Something quickly passed between him and my daughter, a few words and a look. It was trust. He greets parents with a firm handshake, direct eye contact. He is gentle, child; a family man who worked since he was 19 in electronics. It is where he met his wife, who he talks of as a true partner, and laughs, “she’s tough, if you ever saw her, whoa!” He began this job, up to 39 hours a week, after getting laid off from his last long-time employer Texas Instruments, where, as an electronics technician he worked on everything from traffic-light controller boxes and hospital equipment to pieces for Japanese bullet trains and space shuttles.

Torrez decided against hunting for another well-paying electronics job, this gig was to be a stop-gap, which began eight months ago. He hopes it’ll kick in fulltime. He talks of family and a deep socket of sadness opens inside him. Two of his siblings died young, a sister in ’08 and a brother in ’15, and his father, with whom he was very close, died of cancer last year. “I thought he was going to make it.” He remembers dad’s last Christmas, when he was fine, dressed in a Santa outfit. He stops, wet fills his eyes. His work with children emphasizes the kid lurking inside, their joy a reproach to pain of his dad’s death. A moment later, he adds, “That’s the reason I’m here, my father. It helps, it helps a lot. Like meditation.”

Few things in life are sadder than telling kids, even those prone to surly fits, that playtime is over, and Torrez and Sommer agree. One child whirls a rope ball for a ladder toss game and his face scrunches into a frown, his shoulders drop, and he says to Sommer, “please, longer?” Minutes later he scuffles over to his dad who’s attempting to engage him with his own football. A pair of happy, careless sisters with spectacularly long black hair hold on to hula hoops as long as they can. A few mothers collect their children with tender hands on small backs, whispers in ears. In the 20 minutes it takes to pack up and load the van, Torrez and Sommer are the amiable shepherds saying goodbye.

The toys and games erected and placed across a quarter acre are all soon sanitized and stored in module-like containers, filling the back of the sparkling, custom painted Ready, Set, Rec! mini van number four. It’s hyper organized, mathematical, and ready to be driven back to the Tucson Parks and Recreation Department for another day at another park.