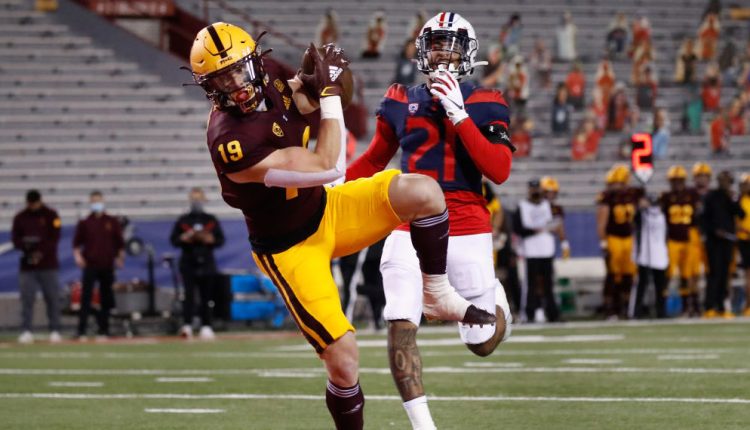 The Territorial Cup — the oldest rivalry trophy in college football — will endure its 96th meeting on Friday in Tucson.

While the Wildcats may own the all-time series lead of 49-45-1 going all the way back to the rivalry’s inception in 1899, the Sun Devils have been the more favorable team in recent years with their 15-7 record since the turn of the millennium.

The latest installment comes as both teams miss the bowl season, with the Wildcats (4-7) hoping to wrap 2022 and label it as a turning point. For the Sun Devils (3-8), it’s about looking into an offseason where a coaching search aims to renew vibes around the program.

Dating back to 2010, here’s a look at the last six Territorial Cup football games played in Tucson:

It was Dec 11, and because of the pandemic that had canceled a chunk of the season — and a COVID-19 outbreak that struck ASU especially hard after the season got started late — the teams entered with a combined 0-6 record.

Arizona State kick returner DJ Taylor brought the opening kickoff back for 100 yards and a score. Then a fumble after two Arizona plays from scrimmage led to another Sun Devil touchdown less than a minute into the game, and from there — just look at that score, man.

The Wildcats lost three more fumbles on the day and threw three interceptions between three quarterbacks who played.

None of the Sun Devils’ scoring drives were longer than seven plays.

The bigger-picture result was Arizona fired head coach Kevin Sumlin hours after the loss to finish 0-5 on the year (a final game against Cal was canceled).

ASU won its last game of the year at Oregon State to finish at 2-2.

The meeting between the two rivals in the Old Pueblo was one of the all-time great battles.

With Arizona State trailing 40-21 going into the fourth quarter, the game seemed all but over and the cup destined to return to Tucson.

But the Sun Devils managed to score 20 unanswered points to take a one-point lead and set up the Wildcats with one last opportunity to kick a game-winning 45-yard field goal.

Unfortunately for Arizona, the kick sailed wide right along with the team’s bowl chances that season, as the loss brought the Wildcats’ record to 5-7 while the 7-5 Sun Devils went on to the Las Vegas Bowl.

For those that may not remember, this can be most simply put as “the running game.”

That’s because Arizona only completed three of a whopping eight pass attempts in a game that the Wildcats managed to score 56 points in.

So how is that even possible you might ask?

In what was then-head coach Todd Graham’s last game in Tucson, the Sun Devils allowed an astounding 515 rushing yards on 46 attempts (11.2 per carry).

The 2014 Territorial Cup had an extra ingredient to it.

Because of UCLA’s loss to Stanford that day, the game (unofficially) ended up being the Pac-12 South “championship game.”

In what was a back-and-forth affair that featured fan favorites such as Arizona’s Scooby Wright and ASU’s DJ Foster, the Wildcats would eventually prevail to their only Pac-12 Championship Game in school history.

Unfortunately for the Wildcats, they weren’t able to beat the Oregon Ducks for a second time that season and fell to the inaugural College Football Playoff runner-up.

Arizona would then go on to face the Boise State Broncos in the 2014 Fiesta Bowl on New Year’s Eve.

In what was yet another classic Territorial Cup matchup, the Sun Devils were able to pull off the come-from-behind victory thanks to two big turnovers and a blocked punt, all of which transpired in the fourth quarter.

In what was arguably the craziest Territorial Cup football game of the decade, Arizona State managed to pull off a victory in the most unlikely of circumstances.

With 30 seconds to go in the game and Arizona trailing 20-14, the Wildcats were able to get the game-tying score and sent their kicker out for what would have presumably been the game-winning extra point.

Unfortunately for Alex Zendejas, his kick was blocked and forced overtime between the two bitter in-state rivals.

But things would go from bad to worse for Zendejas and the Wildcats.

Following an Arizona touchdown to cut the Sun Devils’ lead to just one, ASU would claim victory of the game by blocking yet another extra point.