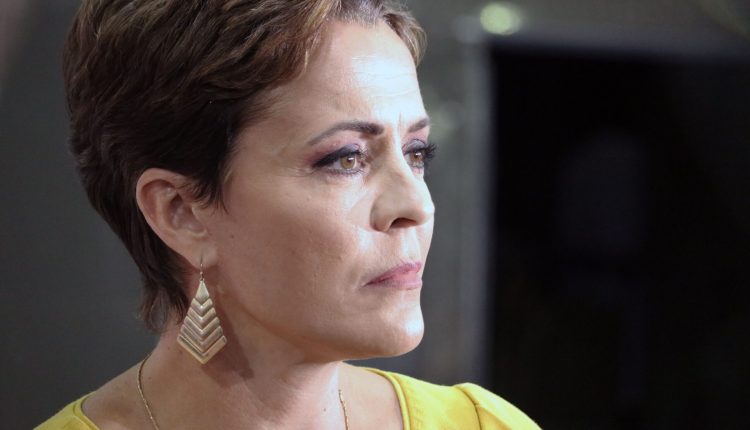 “Happy Indigenous People’s Day!” Colton Duncan wrote on Twitter along with an artist’s rendering of a human sacrifice by an ancient Mesoamerican civilization that lived thousands of miles away from Arizona.

Many states and cities have replaced Columbus Day, which was on Oct. 10 this year, with Indigenous People’s Day to recognize the civilizations that had existed for centuries in the Americas prior to the arrival of European colonizers.

Lake earlier this month called Duncan “the most important person” on her campaign.

Although Duncan’s tweet was made in the early morning hours of Oct. 11, it didn’t garner attention until Oct. 20, when Democratic lobbyist and campaign consultant Mario Enrique Diaz retweeted it.

“This is @katiehobbs opponent’s campaign manager. I don’t know what the purpose of this post is but it’s consistent with the theme of dividing Arizonans. When our Native American friends are working to keep #Arizona’s water supply alive, for example, this is sad,” Diaz wrote.

Debbie Nez-Manuel, a Navajo and national committeewoman for the Arizona Democratic Party, said the tweet is inexcusable — both for its racism and for its ignorance of the Indigenous people whose civilizations thrived in what is now Arizona for centuries before colonizers arrived.

“It’s just infuriating. This is probably one of the worst things I’ve seen,” she said.

Lake owes all Indigenous people a heartfelt apology for the “gross imagery” and “ignorant” racist message of her campaign manager, Nez-Manuel said.

“Kari Lake is the candidate. She’s 100% responsible for whatever her campaign manager does,” she told the Arizona Mirror.

If Lake fails to apologize and hold Duncan accountable, Nez-Manuel said it will show that “she doesn’t care about our perspective” or about Arizona, which has more tribal lands than any other state. Arizona is home to 22 federally recognized tribal nations, but nearly 500 Indigenous peoples from across the nation are represented in Arizona’s population, she added.

State Sen. Victoria Steele, a Tucson Democrat who is of Seneca/Cayuga Native ancestry, said in a written statement to the Mirror that someone posted the same image on her Facebook page on Indigenous People’s Day — and she’s not surprised that a prominent member of Lake’s team found it appropriate.

“Just because someone can read a teleprompter does not mean she has the intellectual ability to read and understand a history book,” Steele said, referring to Lake’s former career as a television news anchor. “Clearly, she has lost her moral center if this is the kind of behavior she tolerates in her campaign.”

Lake has accused her opponent, Secretary of State Katie Hobbs, of being racist because a Black legislative staffer successfully sued the state for sex and racial discrimination after she was fired several years ago. The staffer, Talonya Adams, worked for the Senate Democratic caucus, which Hobbs led at the time.

And Lake’s campaign has also said it “absolutely denounces bigotry in all its forms” after receiving an unsolicited endorsement from a prominent racist.

But Lake also briefly endorsed an Oklahoma Republican who said “the Jews” are evidence that “evil exists.” The endorsement sparked outrage, and Lake ultimately rescinded her support.

Ross Trumble, a spokesman for Lake’s campaign, did not respond to multiple requests for comment about Duncan’s racist social media post.

Early voting has begun in Arizona in advance of the Nov. 8 general election. November is also Native American Heritage month.

***UPDATED: This story has been updated to include comments from Sen. Victoria Steele.