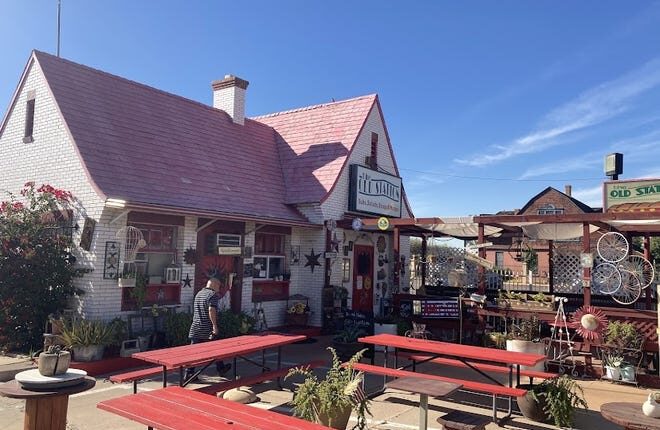 Ecological principles prevalent in nature also have their application in the business world. In a restaurant industry dominated by generalists like Subway and Jimmy John’s, The Old Station Sub Shop is a specialist, cleverly locating its niche sandwiched between Phoenix Pioneer Cemetery and the Arizona State Government complex.

Since 1986, daring bureaucrats have ventured beyond the comfort of institutional cafeterias to fill its bays at 1301 West Jefferson Street. When the offices lock their doors, customer activity ceases in the challenging neighborhood frequented by the homeless. This landscape creates a habitat that dissuades any sandwich conglomerate from infringing on The Old Station’s turf.

As the name implies, The Old Station inhabits what filling station fanatics believe is a former Conoco station built in 1928. Either way, it’s likely one of the oldest repurposed former petrol palaces in Phoenix. Initially known as the Marine Model Gas Station, its Period Revival Style creates a “homey” feel.

The building has gone from pumping petrol to piling on pastrami. In the intervening years, after becoming a Mobil station in the 1930s, it served as a local market and likely still sold petrol in the 1940s. During the 1950s, it reverted to a gas station, according to the Phoenix City Directory. The building was vacant from the mid-1960s until 1976 when it served as surplus parking for the adjacent John Armer Air Conditioning Co. By 1977, Castellano’s Garage used the building for auto repair.

Debbie and Joe Faillace have run the lunch stop adorned with license plates, vintage signs, and sports memorabilia for more than 35 years. “Some people think it’s a train station, but I tell them it’s a former gas station with a grease pit underneath it,” Debbie Faillace says.

Joe grew up in the restaurant industry, as his father owned Eddie’s Atlantis at 7243 East Camelback Road in Scottsdale in the 1970s. Joe was operating Sandwich Heaven near 35th Avenue and Thomas Road when he first learned of The Old Station. “It was a cute place that an older couple had run for a couple of years, but it was messed up,” he recalls. “But I saw the potential with all the nearby government buildings.”

Debbie says that the restaurant initially had two old gas pumps out front. “But customers kept backing into them,” she says. “We were renting then, so we had the owner get rid of them. Last I heard, they were in an antique shop in Wickenburg.”

Patrons include many politicos, former Diamondbacks players Luis Gonzalez and Randy Johnson, and the heavy metal band Metallica. “The band ordered 75 sandwiches to take with them on an airplane after a concert at the University of Phoenix Stadium in 2017,” Debbie says. “My husband didn’t know who they were, but my sister is a huge fan. They gave us a $50 tip, and I got my picture taken with the group for her.”

The Old Station’s fanbase takes their subs seriously. Last year on April 1, the owners placed “For Rent” signs in front of the business and sent their customers a “Thank You” goodbye message. “It was an April Fool’s joke! But it didn’t go over very well,” Debbie says. “We had customers calling and crying, so we had to take down the signs that morning.”