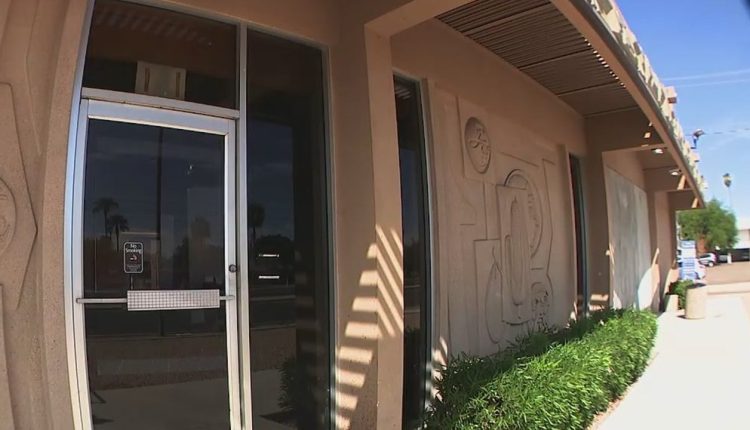 The old Valley National Bank near 19th Avenue and Bethany Home Road was first designed in 1963, and the historic building is in jeopardy of being demolished.

PHOENIX – The old Valley National Bank near 19th Avenue and Bethany Home Road was first designed in 1963, and the historic building is in jeopardy of being demolished.

Advocates for the preservation of the building road are speaking up although the Chase Bank branch has been closed for some time.

In the digital age of smartphones and apps, banking is just done differently now. That means downsizing, and this building is on the market, but there’s history in its bones.

Behind the hustle and bustle, is a bank without business across the street from the old Christown Spectrum Mall.

“This is what we would call a mid-century modern design,” said historian Donna Reiner with Preserve Phoenix. She knows a lot about this building.

It was designed six decades ago by Weaver & Drover. Three panels of distinct, relief sculptures were added in later renovations.

“That definitely caught our eye because we’re familiar with this building because it is in the city of Phoenix’s mid-century marvels book,” Harder said.

The potential buyer was Fortis Development.

Fortis’ founder says his company is backing out of the deal after feedback at a historic preservation commission meeting.

“It really takes, I think, a potential developer who sees the beauty of the building and understands that it’s historic and has a vision and is able to incorporate it into whatever larger project that they might have in mind,” Reiner said.

Reiner and Harder want this building to be put on the Phoenix Historic Property Register so it can never be torn down. They say without the protection, the building is still vulnerable and at risk of being torn down.

“Our goal is to be the voice of preservation within the city to advocate for the buildings to be preserved,” Harder said.

If you’re interested in the cause to have the old Valley National Bank preserved, you can email [email protected]

Top 10 things to do in Flagstaff – The NAU Review

Here are some of the most controversial