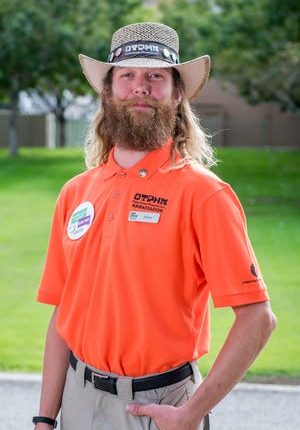 Corrections and Clarifications: Updated the article to correct the timeline of Hans Hughes’ hospital stay, the day of his death, and the spelling of his sister’s first name.

A longtime Downtown Phoenix Inc. ambassador has died of his injuries after being hit by a drunk driver in August.

Hans Hughes was cycling home from work on the night of August 20 when he was hit near First and Fillmore Streets, Phoenix police said last month.

Hughes was rushed to Banner University Medical Center with serious head and chest injuries while the driver was on trial on suspicion of drinking and driving.

Downtown Phoenix Inc. named Hughes a “superhero” in an Instagram post announcing his death, which included a photo of him in his signature ambassador shirt and orange cloak.

“We love you so much, Hans, and we know the entire community does too,” the post reads.

Downtown Phoenix Inc. asked the public to share their memories of Hughes, who had been an ambassador for 12 years. Comments left on Wednesday afternoon described a man with a good heart, a wonderful smile, and a passion for showing others around the city he loved.

The GoFundMe Help Hans Heal page, set up while Hughes was in hospital, had raised more than $ 41,000 by Wednesday afternoon.

Downtown Phoenix Inc. is holding a candlelight vigil for Hughes family and friends at the Lath House Pavilion in Heritage Square Park in downtown Phoenix on Saturday, September 25th at 6:00 p.m.

If someone is posted on the case, police will provide the name of the arrested person, Williams said.

“It’s only shocking because he was in recovery. … The medical team said something about the move to rehab, ”Potter said.

Hughes’ sister, Hana Kuykendall, posted on Facebook on September 6th that Hughes was awake and approachable.

Kuykendall later wrote about the day and called it “the most beautiful thing I have ever seen. I cried tears of joy for a good 15 minutes.”

On September 13, Kuykendall announced that Hughes “is slowly but surely making progress in his cognitive and physical abilities every day. This is great! He’s waiting to be transferred from ICU to acute rehab this week. “

But on September 18, Kuykendall published that Hughes was being transferred back to the intensive care unit. His heart stopped and medical staff performed lifesaving procedures for 20 minutes to successfully resuscitate him.

Hughes’ heart stopped and started again on September 19, but both incidents had caused too much brain damage for him to fully recover, Potter said.

“He remained life sustaining until September 21st. As a registered organ donor, Hans went life sustaining in hopes of finding someone to use one of his organs. Even in his final moments, Hans was brave, strong, overwhelmingly kind, and selfless,” said Potter .

“We all got our hopes up and were excited that there was a light at the end of the tunnel. Having a full 180 is just doubly shocking, ”Potter said. “It is devastating to the community and its family.”

Potter says tragedies like this draw attention to deficiencies in pedestrian safety laws and practices in Phoenix.

“We need more protected bike paths. While the city has made an effort and we have our first protected bike lanes on Third and Fifth Avenues, that’s just not enough, ”said Potter.

As for the unknown drunk driver, Potter says, “Your selfish actions have killed the brightest light in downtown Phoenix … I hope you will be held accountable.”

A “loved” and “important” figure in downtown Phoenix

RJ Price, chief marketing officer of Downtown Phoenix Inc., said the past few weeks have been “a kind of roller coaster ride” and everyone who has worked with Hughes is “absolutely in mourning.”

Price said Hughes had “such a sociable personality”. He waved to the light rail passengers and had a booming voice that replied, “It’s another beautiful day in downtown Phoenix!” when passers-by asked how he was doing.

“It’s hard to miss him and when you talk to him it’s hard to forget,” Price said.

Hughes’ passion is “real and overflowing,” Price said, adding that evidence of this lies in the flurry of support and love seen by the public since the crash.

“It confirms everything I’ve already believed about what this neighborhood is and how this community responds to situations like this,” he said. “I don’t think you will find any closer neighborhood or community than this one down here. If one of us is hurt, we are all hurt. ”

Price said people like Hughes don’t come around often, and that makes the loss “particularly devastating”.

“He’s had a great relationship with everyone – I think that’s part of his legacy,” said Price. “You won’t find a negative word about Hans Hughes. He was so popular and so important to the area and made a lasting impression.”