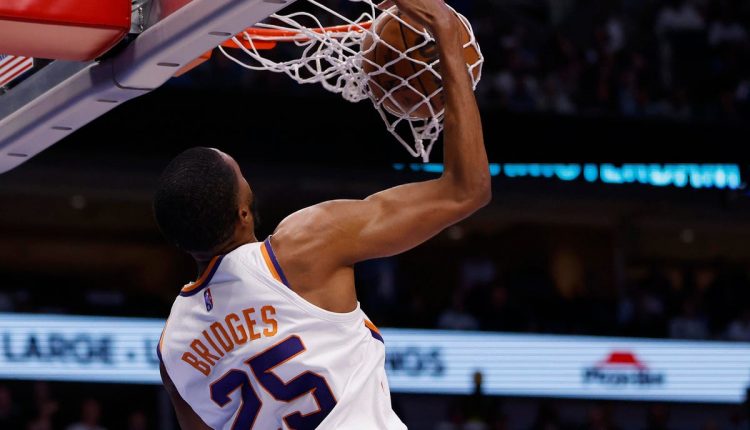 DALLAS, TEXAS – MAY 12: Mikal Bridges #25 of the Phoenix Suns dunks the ball against the Dallas … [+] Mavericks in the second quarter in Game Six of the 2022 NBA Playoffs Western Conference Semifinals at American Airlines Center on May 12, 2022 in Dallas, Texas. NOTE TO USER: User expressly acknowledges and agrees that, by downloading and/or using this photograph, User is consenting to the terms and conditions of the Getty Images License Agreement. (Photo by Ron Jenkins/Getty Images)

The Phoenix Suns failed to close out their second-round series against the Dallas Mavericks on Thursday, extending the series to a final seventh game to be played Sunday.

It’s not exactly the path fans expected the Suns to walk, considering their league-leading 64 wins in the regular season, and the sheer level of dominance they showed during the course of the season.

The Mavericks, which have all kinds of roster questions hovering over them, have proven to be a tough nut to crack, despite having just one primary driving force in the form of Luka Dončić. As such, good advice comes at a heavy price these days, especially as game 7’s for the most part are chaotic and can go either way. So let’s look at some possible adjustments the Suns could make for Sunday.

Yes, yes, this sounds very simple, and has far too often in recent history been the idea to answer every team’s prayer. Taking more three-pointers isn’t exactly rocket science, and it won’t be enough to gain a significant advantage. But, it is a start.

The Mavericks have taken 78 more three-point shots than the Suns in this series, and have made 26 more shots from range. That difference is extremely noteworthy, especially in terms of squeezing out extra points. Or rather, failing to do so.

Generally speaking, teams can live with less three-point shots if they make up for it in other categories, such as at the free throw line, or simply being more efficient at other areas of the court. The issue here being, that the Suns are also behind at the line. Over six games, they’ve attempted 109 free throws to 144 from Dallas. The game-to-game disparity, on average, isn’t that big (5.8 free throw attempts in favor of Dallas), but in a best-of-seven series, it quickly adds up.

Phoenix does have an efficiency advantage. They’re hitting near 50% from the field for the series – 49.2% to be exact – and are sporting a TS of 59.4% which is frankly elite offensive efficiency. A major part of that, however, comes off the production of Jae Crowder, who is rocking a 68.1 TS% of this series, and that might be a cause for concern giving how inconsistent he’s been historically from series-to-series.

In the first round against the New Orleans Pelicans, Crowder hit just 33.3% from the field, including an unthinkable 11.5% from three-point range. His wonky production, and overall role, can somewhat easily swing the outcome of a game, and Phoenix needs to understand that risk coming into Sunday’s final game of the series.

It should behoove the Suns to empower Mikal Bridges, one of their better shooters, to launch with more freedom from the outside. The 6’7 wing is taking just 2.5 attempts in the postseason, which seems misplaced given his 7’1 wingspan and high release point. If nothing else, an argument could be made that Bridges should turn those 2.5 nightly attempts from outside to what he attempts per quarter. The Suns not only need the extra shooting, but the extra scoring from one of their best two-way players.

Go under the screen on Dončić

As dangerous as Dončić is offensively, and for as many three-pointers he takes (nine per game), he remains an unfinished product as a knock-down three-point shooter who is currently hitting just 29.6% from deep. That improvement might come within the next few years, but until it does, the Suns should go under the screen on every ball screen, inviting Dončić to take long pull-ups from outside the long line.

Even if Dončić hits a nice chunk of them, it takes him out of the paint where he does considerable damage. It means less foul-drawing on Phoenix’ big men, which should mean less free throws, and it offers little in terms of forcing the defense to collapse, which usually allows the Slovenian superstar to find open shooters.

While going under won’t always work, as Dončić is the king of forcing switches and attacking smaller opponents, it’s a step in the right direction of keeping him away from the basket, thus allowing Suns defenders to (mostly) stay home on Dallas’ shooters.

It would also give the Suns a boost if All-Star Devin Booker were to have one of his more explosive scoring games, as also to give Dončić some work to do on the other end. Just as Dončić hunts for mismatches, so can Booker, and the Suns should make it a priority getting him going often.

While the Suns are still favored, going up against a team led by arguably a Top 5 player is no easy task, especially one who manipulates defenses to the degree that Dončić does. For Phoenix, it’s about changing up the game plan and leaning into shots with higher value. While it may be risky, it could save the Suns from elimination and lead them to a return to the Western Conference Finals.