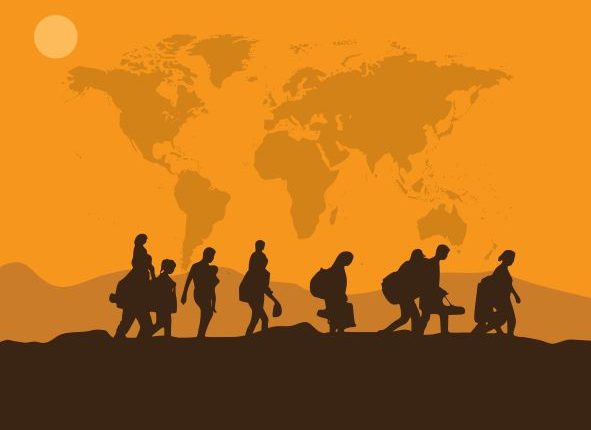 The Sharif Family Arrives in Tucson: A Refugee’s Story

Note: The names in the story have been changed.

The Sharif family arrived to Jewish Family & Children’s Services (JFCS) in early January of 2022 after months of upheaval and uncertainty. JFCS’s Reception & Placement Case Manager, Omed, met them at the airport upon their arrival. He helped the father, Sadiqullah, carry their five duffel bags to the van. These five bags were packed with the remnants of the family’s life in Afghanistan. From a hectic departure and days of transit, the duffels were worn and dirty. They might not have looked like much, but they contained all that was familiar to the family in a new home.

When Kabul fell on August 15, 2021, some Afghans were evacuated right away, while others – including the Sharif family – moved around the country, trying to stay hidden from the Taliban. The Sharif’s hid for months, fearing for their safety because Sadiqullah had worked for the US government. Finally, in October, they received a call from a contact in the US embassy, ​​telling them to be prepared for evacuation within three hours. They were evacuated to Virginia where they spent the next three months living on a US military base, as did almost 80,000 other Afghans on similar bases across the US Tamana spent her first weeks in Tucson going to and from ultrasound appointments. Her due date was arriving quickly, and a plan needed to be made for her delivery. At the time, hospitals were only allowing one other person in the room with the mother due to Covid restrictions. As the couple had a two-year old, Sadiqullah said he would stay home with the toddler while Tamana gave birth. Instead, Sofie, JFCS’s Intensive Case Manager, would stay with Tamana in the hospital. Her delivery went well; here baby, healthy. Afterwards, in a quiet hospital room, Tamana called her mother and sister back home in Afghanistan to relay the news.

Over the following months, the Sharif family began to adjust to their new life. Sadiqullah started a job as a handyman and Tamana started English classes. They learned the bus system, opened a bank account, and met other families in their community. Their life has changed significantly, but they are in charge of their life again. In a year full of upheaval and uncertainty, they have managed to find stability and routine again.

Thanks to an anonymous donor, a matching grant has been established at Jewish Philanthropies of Southern Arizona. Today, your donation to aid refugee resettlement will be doubled. To donate, or for more information, click here.

Threats to democracy are the ‘most comprehensive’ in Arizona