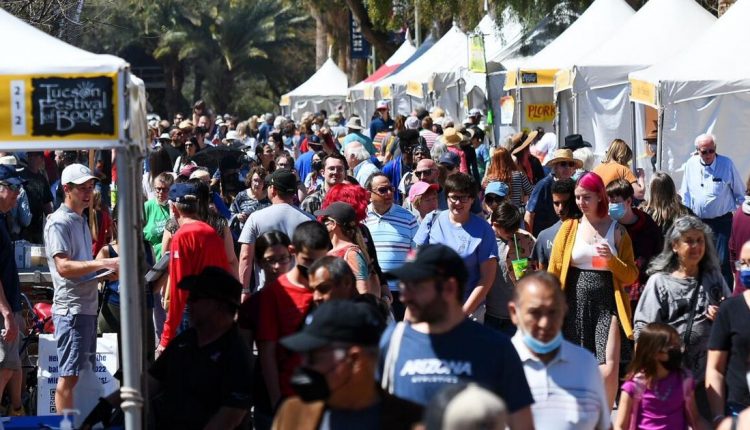 The Tucson Festival of Books is coming back in full force

The Tucson Festival of Books has finalized plans to offer a full-scale book-a-palooza next spring, its first fully-formed festival since 2019.

With a $1 million budget, TFOB is set to be held the weekend of March 3, 4 and 5 at the University of Arizona.

“We want to pick back up where we left off in 2019,” Executive Director Melanie Morgan said. “We’ve needed to be creative the last two years. Things have looked different because they needed to be. Now we want to get back to the arc we were on before.”

Before 2020, that is when the festival was canceled because of a newly emerging COVID-19 pandemic.

In 2021, it was staged online only. Earlier this year, it was again held in person, but planners purposely scaled it back out of caution.

In almost every respect, from the number of authors and food courts to the size of the footprint itself, the program last March was about 25% smaller than it had been.

For 2023, planners hope to introduce 300 authors across all popular genres. There will be 300 author presentations on 33 festival stages scattered across the entire east side of the university. Attendance, it is hoped, will return to the 130,000-140,000 range that flocked to the festival from 2015-2019.

When seen through the eyes of a festival attendee, Morgan said the most visible changes will probably be in the two zones most popular among kids: the Children & Teens area and Science City.

“With all the uncertainty around the pandemic, and since children couldn’t be vaccinated last time, we needed to move things around and spread things out to ensure distancing,” she said. “We eliminated some of the areas where we’d done hands-on activities that made things so much fun. We’re re-doing the layouts in those two areas now so kids can be kids again.”

The “Book Nook Tent,” an activity area for older toddlers, will again be offered by the Tucson Children’s Museum and the Stocker Foundation.

The Nature and Environment Stage, sponsored by the Western National Parks Association, will be back, located on the university’s east mall in Science City.

Interactive science spaces for kids will return. Food and beverage options will be increased. Readers and their favorite writers will no longer be separated by Plexiglas in the signing areas.

Moving back to the future will not come without challenges, Morgan said. One big concern: costs. It ain’t 2019 anymore.

According to government statistics, retail prices have increased 15-20% in the last three years, and some items — such as airfares — have risen more than that.

“A 2019 budget won’t work in 2023,” Morgan said. “Costs have gone up a lot, especially in some of our most important areas, but we’ve always hit our marks before. Our volunteers are amazing.”

Speaking of volunteers, another festival challenge will be re-enlisting the once-robust army of 2,000 volunteers. Between the long hiatus and lingering fears about the pandemic, dozens of volunteer shifts went unfilled in March.

“I don’t think people realized we were ‘hiring’ again,” Morgan said. “Our festival is driven by our volunteers. We need you!”

Buy and Bust: After Platinum Health Took Control of Noble Sites, All Hospital Workers Were Fired