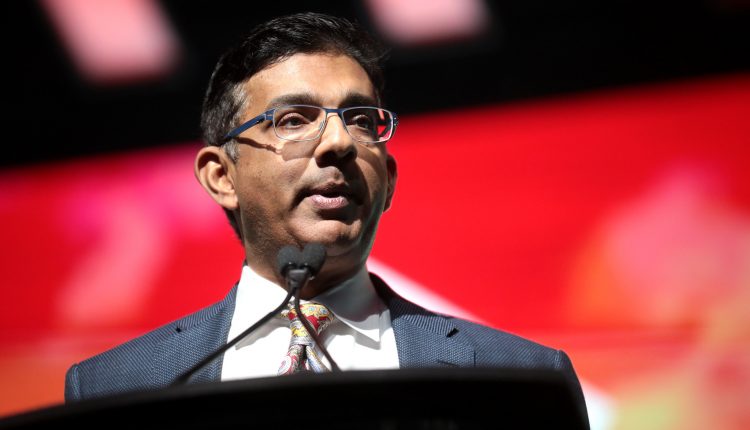 Conservative activist and filmmaker Dinesh D’Souza told a conservative podcast that “2000 Mules,” his film making flawed and faulty claims about election fraud in 2020, directly led the Yuma County Sheriff’s Office to open up an investigation — but the sheriff says that’s simply not true.

“These ongoing investigations are not related to or inspired by any movie or celebrity figure, but rather facts and evidence regarding violation of Arizona statute,” Wilmot added. “I am not familiar with, nor have I ever communicated with, any individuals who may now be claiming I am investigating on their behalf or because of any supposed inspiration from a documentary film.”

Wilmot was responding to the Mirror’s questions about comments D’Souza made on Jason Whitlock’s “Fearless” podcast. The far-right provocateur said that Wilmot saw a screening of the movie “2000 Mules” and “went berserk” afterward.

“The Sheriff of Yuma saw our movie, went berserk and has opened up an investigation in Yuma, Arizona and I believe there will be arrests very soon,” D’Souza said on the podcast, which is produced and distributed by conservative media company Blaze Media.

D’Souza did not respond to a request for comment.

The film alleges that by using geolocation data purchased by the filmmakers they were able to track “ballot mules” to drop boxes where they falsely allege the “mules” were paid to stuff the boxes with completed ballots. The practice, pejoratively referred to as ballot harvesting, is illegal in Arizona and many other states.

Wilmot announced last week that his office and the county recorder’s office are investigating voting fraud cases from 2020, but there is no indication that any of the cases involve the movie’s claims. Instead, YCSO said the cases include impersonation fraud, false registrations, duplicate voting and fraudulent use of absentee ballots.

Since D’Souza made his comments, others have latched on, including The America Project Founder and former Overstock.com CEO Patrick Byrne.

In a video posted to Rumble, a video streaming service favored by the far-right, Byrne said the Yuma investigation was in direct response to the film. Byrne’s organization was the largest funder of the Arizona Senate’s “audit” of the presidential election.

Byrne has also been a leading voice in 2020 election fraud claims and has railed against the so-called deep state. Byrne attended an hour-long meeting at the White House during the final days of Donald Trump’s presidency in which he, attorney Sidney Powell and disgraced retired Gen. Michael Flynn urged the president to overturn the election and impose martial law.

I am not familiar with, nor have I ever communicated with, any individuals who may now be claiming I am investigating on their behalf or because of any supposed inspiration from a documentary film.

D’Souza’s film has been criticized for many of its false claims, including that the geolocation data used is so accurate that it helped solve a murder. The film is based on one whistleblower from San Luis, Ariz., who claimed to have seen people getting paid for ballot collection. The film contains no evidence of these payments.

An analysis of the film’s claims by the Associated Press found numerous problems with the data analysis that D’Souza and True the Vote, a conservative advocacy group, performed to reach their conclusions. For instance, there is no accounting for people with multiple mobile devices that could create pings in the geolocation data or people who are elections or campaign workers who would drive by areas where drop boxes are located on a regular basis. Other fact-checkers have also done independent analysis of the claims and found them to be flawed.

D’Souza has a history of making controversial films.

His first film, “2016: Obama’s America,” made more money at the box office than any political documentary since “Fahrenheit 9/11,” garnering him the nickname the “conservative Michael Moore.”

Multiple films by D’Souza have focused on his political enemies, as well as mentioning his conviction for campaign finance fraud. Trump pardoned D’Souza for that crime.

“2000 Mules” has gained an ardent following among Arizona Republicans and within the broader right-wing ecosystem.

“Have you seen #2000Mules yet?” Secretary of State candidate and Oro Valley Republican Mark Finchem posted on Twitter.

Arizona Attorney General Mark Brnovich in 2020 announced two Yuma County women were charged under the ballot harvesting statute. D’Souza has hyped those prosecutions on social media in an attempt to buttress his movie’s claims, but has spread false information about those cases in doing so. He claimed the case was “busted by the FBI,” but it was investigated by local law enforcement and the Arizona Attorney General’s Office.