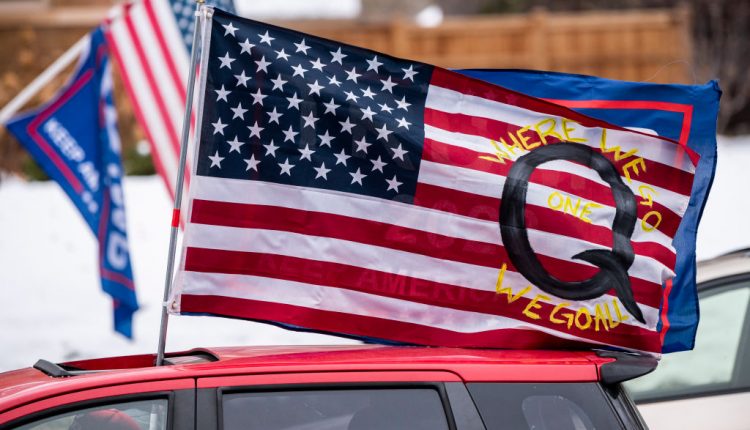 Jerone Davison, a former NFL player mounting a long-shot bid for Congress in Arizona, is certain that federal law enforcement is responsible for children being murdered in mass school shootings, like the one that left 19 fourth-graders and two teachers dead in Texas in May.

“The FBI is not a friend of this country,” Davison said on a conservative talk show last month. “All these school shootings, the FBI had prior knowledge to what was going on.”

And Davison is equally sure that the FBI set up a Chandler man named Austin Steinbart.

Steinbart is a QAnon celebrity, known in the conspiracy theory community as “Baby Q.” Many of his supporters believe him to be the mythical Q that for years posted cryptic messages on an obscure online message board. He has told his followers that his future self is sending messages back in time so that present-day Steinbart can reveal the truth.

He also happens to be Davison’s campaign manager.

Davison is one of three Arizona candidates this year with close ties to Steinbart, all of whom are openly embracing QAnon.

In its simplest form, the complex and damaging QAnon conspiracy theory that alleges that a cabal of Satan-worshiping pedophiles are running a global sex-trafficking ring, control world governments and are trying to bring down former President Donald Trump — who is himself single-handedly dismantling the cabal.

There are many iterations of the theory, as adherents are encouraged to do their own “research.” As a result, there are a wide variety of QAnon beliefs. For example, some believe that Q is actually John F. Kennedy Jr. — who died in 1999 when the plane he was flying crashed into the Atlantic Ocean — while others believe Q is actually Trump himself.

All these school shootings, the FBI had prior knowledge to what was going on.

In a June 20, Facebook post Davison shared an interview between himself, Steinbart and a conservative talk show host in which he said “the left” is attempting to have him fire Steinbart from his bid as a Republican in Congressional District 4.

In Davison’s interview with Jim Price, he says that Steinbart, who was arrested for posting medical images and information online of NFL players that he was able to obtain while getting a brain scan, was set up by the FBI. Steinbart directed his followers to harass the tech company and claimed he had done so in part under orders from his future self.

Davison said that, after “researching” the things Steinbart did, he concluded the 31-year-old “didn’t do it.” The real culprit, he said, was the FBI, which set him up “just like the people on January 6.”

Davison’s campaign reportedly quit when he hired Steinbart to be his campaign manager, according to video obtained by Media Matters for America

Arizona has deep QAnon ties, including its politicians

Steinbart said that was part of his plan, to get the eyes of everyone on Davison so he could launch a campaign website prominently featuring his special brand of QAnon language.

“We are rapidly reaching the end of the ‘Nuclear Era’ and entering the ‘Quantum Era,’” Davison’s campaign website declares. In the video obtained by MMFA, Steinbart said Davison’s campaign will allow him to go “really hard” on the “Q stuff” in a more mainstream setting.

On social media, Davison has been echoing QAnon conspiracies that Steinbart has previously espoused.

In one Twitter post, Davison alludes to “HUGE” leverage that former President Donald Trump has on Saudi Arabian Crown Prince Mohammed bin Salman. Steinbart has alleged that Trump helped bin Salman cover up the 2017 Las Vegas shooting which he alleges, without any proof, was carried out by a “Saudi hit team” and not by a lone, middle-aged white man. The chat was excited by Davison seemingly acknowledging the conspiracy theory.

Jake Angeli, an Arizona man who dubbed himself the “Q Shaman,” celebrates being part of the mob that stormed the U.S. Capitol on Jan. 6, 2021, in an attempt to block Congress from certifying the results of the 2020 election. The violent insurrection marked the first time in American history where there wasn’t a peaceful transfer of power. The crowd was spurred on by Donald Trump, who insisted baselessly that he lost the election to Joe Biden because of fraud. Photo by Win McNamee | Getty Images

Davison also has been a guest on a podcast that is listened to frequently by Steinbart’s chat and other QAnon acolytes. Jake Angeli, the infamous self-appointed “Q Shaman” who was among the first people to breach the U.S. Capitol on Jan. 6, hosts a podcast from prison. Davison appeared on the podcast earlier this year alongside Angeli and others.

Steinbart said Davison is one of several candidates he is working for — with the goal of fostering a “regime change” in the GOP.

He’s also working with long-shot gubernatorial candidate Scott Neely, who has appeared on the online QAnon show “The Night Owl News” to discuss his campaign. Duringt the interview, he espoused his support of the QAnon conspiracy theory.

“If you have critical thinking skills, you are Q,” Neely said, referring to a part of QAnon ideology that asserts the community is collectively Q because it questions reality. He said on the show that, after researching QAnon, he decided he was always a “Q” and that the real movement is “quantum.”

Neely is one of three candidates that Steinbart has said he needs to win as part of his “political strategy.”

“I need Jerone Davison, I need Scott Neely, I need Gail Golec,” Steinbart said in audio obtained by MMFA “With those three politicians, I can execute the plan in real life.”

Neely has promoted both Davison and Steinbart on his social media accounts. Gail Golec, who is running for Maricopa County Supervisor, has said on Telegram that Steinbart was hired to do a promotional video for her campaign.

Davison, Golec and Neely did not respond to requests for comment about their connections to Steinbart or their QAnon beliefs.