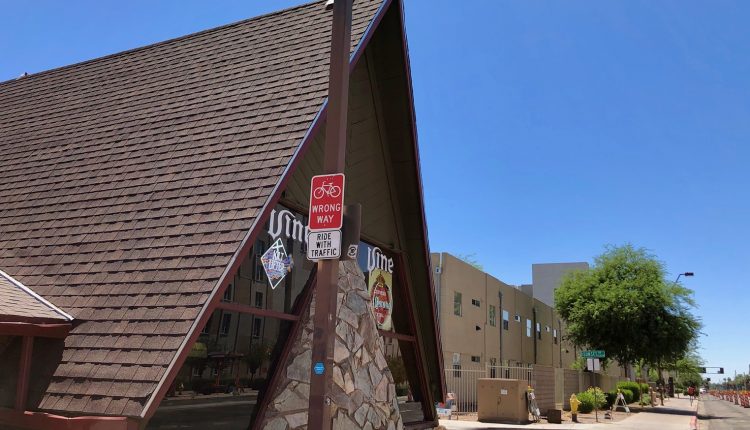 Recently, seven Valley restaurants have closed their doors. One Mexican joint made way for another restaurant from the same company. Two restaurants closed after being in business for more than three decades.

Bevvy Uptown
Local pub and sports bar Bevvy closed its uptown Phoenix location this month. The pub was located on Seventh Street among a collection of restaurants south of Bethany Home Road. It served classic pub fare including tacos, burgers, and shareable apps like chicken wings and fried pickles. The Old Town Scottsdale location of the restaurant remains open.

The Spicery in Our 1895 Home was located in Glendale’s Catlin Court Historic District.

The spicery in our 1895 home
Glendale restaurant The Spicery in Our 1895 Home credited its history right in the name. Located on 59th Avenue, the restaurant opened in 1987 and served afternoon tea with quiches, scones, and desserts. For the last month of business, the restaurant served a special “Farewell Tea” before permanently closing its doors on July 31. click to enlarge

Ladera Taverna y Cocina
Ladera, a Mexican restaurant known for its wide selection of agave spirits and large, plant-filled patio, has closed. The restaurant was part of local hospitality group Genuine Concepts, who closed the location in order to make room for another restaurant. The Vig, a chain of casual restaurants throughout the Valley, will soon move into the Sunnyslope space.

The Vine Tavern & Eatery
The Vine Tempe, an Irish pub and sports bar located in a recognizable A-frame building, closed its doors this month after decades in business. The restaurant opened in 1986 and was a popular hangout with students of the nearby Arizona State University Tempe campus. The Vine was known for its cheap drinks and specialty shots. It closed on July 23.

Desert Eagle Brewery was a craft beer pioneer in Mesa.

Desert Eagle Brewing
Downtown Mesa is now full of breweries and spots to grab a cold beer. But when Desert Eagle Brewing opened almost a decade ago, that was not the case. This local brewery is credited with opening the doors for Mesa’s craft beer resurgence. However, on July 30, the brewery served its last customers just a few short weeks of its 10-year anniversary.

Texas BBQ House
Mike Pitt and Doug Dieckmann, two Texas expats, have been slinging pulled pork, ribs, and Texas Po’Boys on the corner of 24th Street and Roeser Road for the past 11 years. The restaurant, which served lunch on weekdays, served its last customers on July 29, before permanently closing the doors. The owners announced online that they are relocating to Kansas.

The Skinny Elvis from Whyld Ass.

Whyld Ass
Vegan and vegetarian restaurant Whyld Ass closed on July 17 after years of serving plant-based eats and baked goods. The restaurant was located on Seventh Street just south of Camelback Road and announced the closure on social media, thanking their customers for their support.