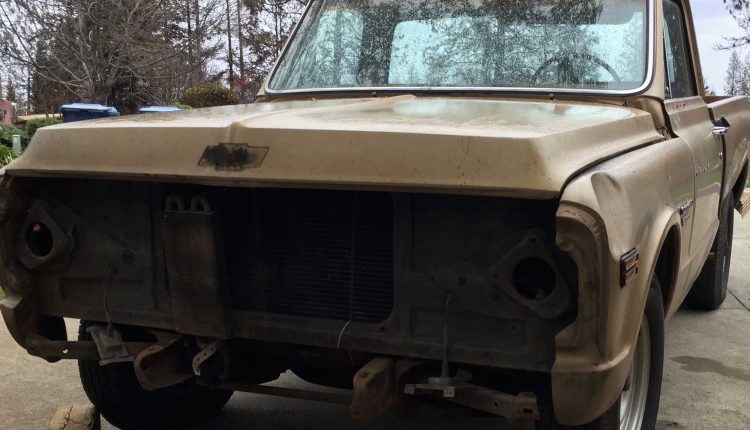 This ’69 Chevy Is A Phoenix Of Sorts

You’ve likely heard the story of the mythical bird called the Phoenix. A symbol of renewal, the story of this magnificent bird with the golden wings states that when the bird’s time was up, it would nest itself in a plume of fire that consumed it completely. Then, a new Phoenix would emerge from the ashes to continue the bird’s legacy.

Dave Thompson’s ’69 Chevy C20 Custom pickup could very well be a Bow Tie variant of this magnificent, if not totally mythical, bird. Firstly, it’s gold in color – mostly. At least it was when it left the factory many years ago, and it retained most of its color throughout many years. And, just like the Phoenix, Dave’s truck also had a run-in with a heated situation. Rather than being consumed, Dave’s truck is a survivor of the Camp Fire back in 2018, which was the deadliest and most destructive wildfire in California’s history.

Dave’s truck had a great work ethic, but it took a toll on the truck’s body. The number of dents throughout the body makes you wonder if the “Park By Sound” theory was in play.

The house where the truck resided was burned while the truck lucked out. It was moved after the fire for safe-keeping, where it sat for the next year. The truck was a work truck all of its life and it showed. The owner was a roofer, so there was a lot of tar and stuff stuck to the body of the truck. It also had several leaks and even though it lived its life in California, rust had taken its toll on the floorboards. That’s when Dave found this pile of only slightly singed ashes and decided to rebuild the truck to its former glory, or better! In 2019, he saved the ’69 Chevy from a humiliating fate at the salvage yard and drug it home for the princely sum of $500, figuring it would serve as cheap therapy.

Dave thinks the previous owner was trying to start a garden inside the cab corners of the truck with all the dirt that had accumulated.

Dave began planning the build and deciding exactly what he wanted his truck to be once the smoke had settled. He explains, “I know many guys like to swap an LS engine or buy a crate engine, but with a limited budget, I decided this would be my opportunity to learn how to build a small-block V8.” Reviewing the block numbers, Dave surmised that the engine was originally assembled in Chevy’s Fremont, California plant, and apparently, the 5.7-liter V8 mill was from a 1973 Corvette. Not a bad starting point for any build.

Dave needed to drill out every bolt holding the bed in place. Even for a California vehicle, there were a few areas of rust to contend with. Rather than replace the entire floor, he patched in areas where necessary.

Dave offers many thanks to John and Josh at the Oroville Auto Supply and Machine shop at Riebe’s NAPA Auto in Oroville, Washington. The team there set Dave up with new rings, bearings, and an accompanying cam and springs so this engine could breathe well. To help keep costs low, Dave used the original pistons, connecting rods, and other various components once they were cleaned and cleared for reuse. Dave’s hauler now has a nice Turbo 400 transmission that Feather River 4×4 in Oroville, went through. And while the self-shifting transmission was on the workbench, he had them install a shift kit as well.

While the machining and building of the drivetrain were underway, Dave began creating the suspension for the ’69 Chevy. Just like the Phoenix, this took a little heat to perfect the final configuration. Dave’s C20 left the factory as a long bed, but he wanted a short bed version. So, he looked up a training video on YouTube from Brothers Truck Parts on how to cut down the frame for a short-bed application.

Rather than go with an LS swap, Dave decided to take on an engine build using the tried-and-true small-block 350 engine that came with the truck. It just so happened that a Corvette engine was swapped in years before.

Dave suffered from arc blindness over a decade ago, so he no longer goes under the welder’s hood. He did all the prep work and then hired certified welder, Kellan Thomas, to melt the metallic glue sticks that made it all possible. In the end, 12 inches were removed from the frame under the cab area and eight inches were chopped from the back end of the frame, making it 20-inches shorter than its original configuration. To help lower the truck, Dave also flipped the axle mounts on that beefy Dana 60 rear axle and notched the frame to make way for the suspension movement under load.

The frame needed some attention to reach the desired wheelbase. Dave cut the frame and mated the two pieces together. There is also a C-notch cut out of the bottom side of the frame so it will clear the rear axle due to the truck’s lowered stance.

In keeping with the cost-conscious build, Dave also opted to keep the factory control arms under his ’69 Chevy and simply replace the ball joints and bushings to bring them back into spec. Lowered springs and spindles from Western Chassis give his truck the perfect ride height. Western Chassis also provided the drilled rotors and painted red calipers so Dave’s truck will stop better than it ever had prior to the fire.

The completed engine, transmission, and chassis are awaiting the new and restored body panels.

As the chassis was forming out of the ashes, Dave swung his attention to the truck’s body. The old Chevy has seen a lot of living since Nixon was in the White House, and its body carried every scar to prove it. Dave reports, “While the body panels had some rust, the real damage was from many collisions.”

Since the ’69 Chevy metal was crunched in bad areas like around the taillights, Dave opted to get new body panels and doors. The doors were the victim of at least a half-dozen different mirror styles, each with different hole patterns, and all of them were now rusty. LMC Truck provided new fenders, bedsides, and doors. This is where Dave invested a big chunk of the money from the budget — body panels. I’m using the same cab, hood, tailgate, and internal fender wells. Someone bought the old fenders and doors and I was glad to part with them!”

While relatively rust-free, the body of Dave’s truck definitely needed some attention. The underside was loaded with tar and grime and Dave obsessed over every nook and cranny of the original panels or swapped out to new panels to make sure rust was removed completely. Each panel had its own framework to make working on them easier.

The cab required some work by replacing a couple of areas ben by the rust bug as well as some clean-up that could almost be akin to gardening. Anyone who has dealt with an early truck can attest to how much crud can accumulate in those cab corners. After poking around with an ice pick, Dave filled two dust pans and a small waste can with debris and found that each side of the floorboard was rusted through. He opted to replace those areas with patch panels instead of the entire floor.

To make sure there wasn’t any rust hiding anywhere, Dave turned the cab on its back so he could clean the entire underside. Dave also constructed rolling A-frames so he could hold the various body panels as he worked on them. He would work the body panels smooth, prime, skim-coat, and then sand them to locate any high or low areas. Once everything was straight, he then applied a two-part Metallic Red color and urethane finish coat to give it the hue and shine he desired.

Dave chose a stunning Red Metallic for his ride. Each panel was painted separately and then assembled onto the vehicle so each part received proper coverage and protection of paint.

At this point, Dave is still busy working on his ’69 Chevy truck. The next items on the list are to begin installing the electrics, finalizing the wheel and tire combo, and plumbing the appropriate tubing and exhaust piping. Being his first frame-off build, we’d say he’s well on his way to having a show-stopping ride. We’d love to share his truck with our readers once he’s completed sifting the ashes of his personal Phoenix and it’s ready for the highway in its latest configuration. If you have a home-based project you would like to share with us, and our readers, feel free to shoot us an email. We look forward to seeing what you all are working on in YOUR garages!

Tucson Saguaros walk off with a win, will play Monday night for Pecos League championship | TucsonSports