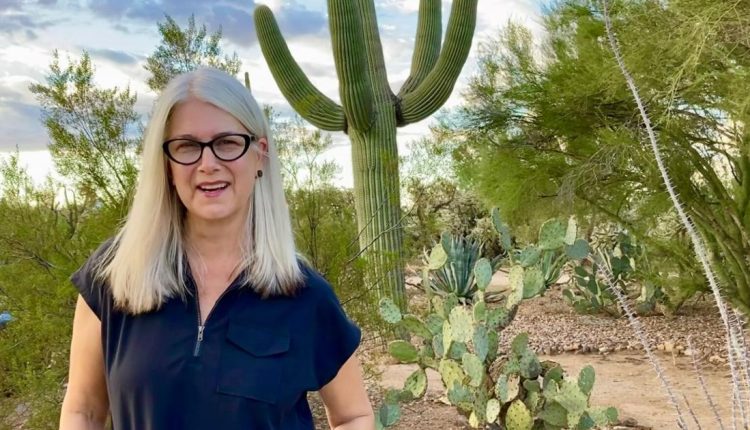 This award-winning Tucson author finds solace in the desert

Not near the desert, mind you. In it, in a small clearing surrounded by lush stands of palo verde, mesquite, cactus and creosote.

To find Millet this late afternoon, a visitor winds slowly down a narrow dirt road, carefully threading his way through cholla and prickly pear. A saguaro points the way past a parked sedan the owner has re-painted Forest Service green.

Some people find solace in soothing meadows surrounded by daffodils. Millet finds it here, which may explain the prickly edge to some of her recent books.

Her latest, “Dinosaurs,” was released last week by WW Norton & Co. It is her first novel since “A Children’s Bible,” a bestselling finalist for the National Book Award in 2020.

Eleven of her books were written since Millet moved to Tucson — and purchased 14 acres of desert real estate — in 1999.

“I just love it here, it’s my favorite place in the whole world,” Millet said of her arid Shangri-La. “When I first bought it, I was planning to live here part-time. I had a life and a boyfriend in New York City. I thought I’d be spending some of the year here and some of it there. After I moved in, though, I just loved it so much I stayed.”

Millet’s move to Arizona may have surprised some of her Manhattan neighbors. She was a city girl, raised in Toronto and educated at the University of North Carolina. Less well-known was the fact Millet had spent four months in the graduate writing program at the University of Arizona. Her mentor there was UA professor and National Book Award finalist Joy Williams. It was Williams who suggested Millet get to know her beloved desert.

It didn’t quite take at first, either the writing part or the desert part. Millet dropped out after a semester, and instead earned a master’s degree in Environmental Policy at Duke. She then accepted a position with the Natural Resource Defense Council in New York. Life was good, but something was missing.

She came looking for it in 1999, accepting a position as a writer for the Center for Biological Diversity in Tucson. She is still there. Her 30 hours a week at the center are framed by three to four hours of writing in the early morning and late afternoon.

“My mom doesn’t live there now, but she has a small house and some property right beside me,” Millet explained. “That’s where I usually write. I write outside whenever I can, even when it’s hot. It’s where I feel most comfortable.”

Who knows who might stop by to say hi. Deer, coyotes, foxes and javelinas are regular visitors to Millet’s outdoor writing studio. Birds play a starring role in her new novel. She mentions a different bird in every chapter, and sprinkles in scientific tidbits about them throughout. The book’s very title comes from the fact birds are descended from dinosaurs.

“The dinosaurs who could fly were the only ones who survived,” she explains. “The next time you see a roadrunner, look how much it looks like the dinosaurs your kids learned about in school.”

Asked how she separates her day job from her night job, Millet said she doesn’t. “My writing always includes my day job,” she said. “It’s enmeshed.”

Millet’s books are wildly different. No two plot lines are the same, but they all guide the reader into scenes featuring animals, nature and the environment.

In “Dinosaurs,” her protagonist and narrator is Gil, a wealthy loner looking for connection and meaning. The story is set in a prosperous suburb of Phoenix, which is Millet’s first clue that she will be playing with us some. Gil learns to love his birds.

“I first wrote the first draft the summer before the pandemic, but I came back to it during the worst times of it in 2020,” Millet said. “I just wanted to project myself into a scene of warmth, a scene of companionship. I wanted this book to be company for me that summer and fall, when there was so much hostility all around us.”

It’s not long, only 230 pages. It is written with humour, a light touch and simple, straightforward prose. Still, the takeaways are deeply philosophical, and the book has captured the attention of the literary establishment.

In the last two weeks, Millet and her new book have been featured in The New York Times Magazine and The New Yorker. She appeared at the Harvard Bookstore last Monday night.

Clearly, Millet has become a big deal in the world of letters, but she insists she’s still the same person who moved to Tucson in 1999.

“Whenever somebody tells me they like one of my books, I always feel like I’ve been struck by lightning,” she said. “If you say you like my book, you’re my friend for life.”

ICYMI: Watch the Star’s top videos from the past week

Watch now: Fire at Tucson recycling center near I-10

Watch now: There’s a reason why we call it ‘Tucson Eat Yourself’

Watch Now: Gar and Goyle pick on guests at Nightfall

Watch Now: Bobcat Sadie and a friend drink from a backyard fountain.