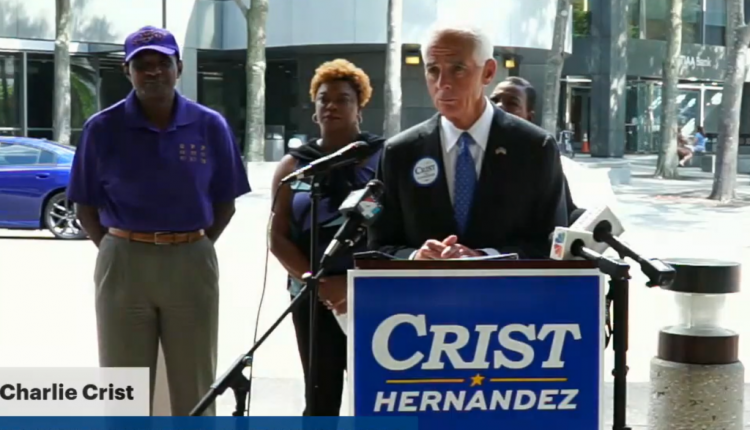 ‘This is an emergency’: Crist slams DeSantis’ approach to insurance crisis

Democratic gubernatorial candidate Charlie Crist has pinned Florida’s tumultuous property insurance crisis on his 2022 opponent, Gov. Ron DeSantis, calling him “the single worst governor on property insurance Florida has ever had” during a press conference in Jacksonville.

The press conference occurred on Wednesday as Floridians were considering whether Crist or DeSantis would best be able to tackle the insurance crisis with the 2022 gubernatorial elections looming around the corner.

The Florida Legislature convened for a special session in May to address property insurance. Lawmakers created a reinsurance fund to back insurers in case of a hurricane or other disasters; barred insurers from refusing to cover homes if their roofs are under 15 years old; and put limits on attorney fees in litigation between insurers and policyholders.

But even at the time, lawmakers were skeptical whether the reforms would produce any immediate benefit for average Floridians, the Phoenix reported at the time, and rates continue to rise.

“Hundreds of thousands of Floridians are getting dumped by their insurance companies. Thousands more at are at risk of losing their coverage. Premiums are through the roof and they have literally doubled,” Crist said.

“And now Floridians have no where else to go, but Citizens,” he said, referring to Citizens Property Insurance Corp., the state-backed, not-for-profit insurer of last resort.

According to March data, Citizens ensures some 824,000 buildings in Florida.

And even citizens is raising premiums. In June, the Florida Office of Insurance Regulation granted rate increases of 6.4 percent for multi-peril homeowner policies, the Phoenix previously reported.

“This is an emergency, for crying out loud,” Crist said. “Not only is DeSantis doing nothing to help Florida families and homes, he’s raising our rates. It’s ridiculous and it’s just plain wrong.”

Crist has been a Republican governor, attorney general, and education commissioner over the years before he became a Democrat. He recently stepped down from Congress to focus on his campaign. But he will have to unseat DeSantis, who is running for reelection.

Many suspect DeSantis has ambitions for the US presidency in 2024. Crist brought up that aspect to DeSantis’ campaign in his Thursday press conference.

“DeSantis is so busy running for president in 2024, he’s forgotten about you and is using Florida as a stepping stone. He’s more focused on the White House than your house. Florida deserves better than that,” Crist said.

He compared his service as governor to DeSantis’ stewardship of the state.

Crist claimed that his special session did lower rates.