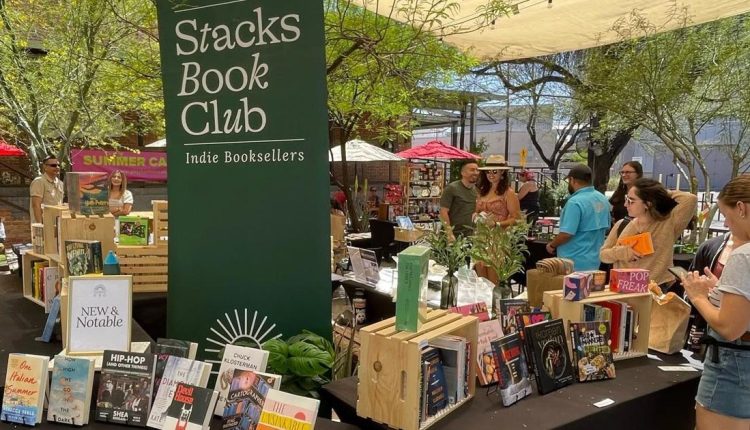 A new bookstore set to open in Oro Valley will also serve as a café, offering coffee, beer and wine to go with your Kingsolver, Grisham and Coates.

Husband-and-wife team Crispin and Elizabeth Jeffrey-Franco hope to have Stacks Book Club up and running on the west end of Oro Valley Marketplace, 1880 E. Tangerine Road, by the end of April.

Both Crispin and Elizabeth grew up on Tucson’s northwest side. After living in bigger cities, including Seattle and Phoenix, then moving back home in 2019 to be closer to family, they noticed a lack of bookstore cafés overall in the Tucson area.

“We saw them in other cities,” Crispin Jeffrey-Franco said. “There is a bookstore café in Phoenix called Changing Hands with a full bar. Tucson has lots of great bookstores and lots of great cafés. For us, there is something about combining the two that makes being in that kind of space really liberating.”

The pandemic pushed the couple to first launch their book business as a pop-up, appearing at local restaurants, such as Charred Pie in Oro Valley, in tap rooms, and at farmers markets, to build the brand and get a sense of what people were reading. As recently as October, they held a book discussion at Dillinger Brewing Company’s East Ninth Street location.

“We had a great time,” Crispin Jeffrey-Franco said. “So many businesses have allowed us to test out this concept.”

When the time came to choose a brick-and-mortar, they opted for Oro Valley, an area where independently owned bookstores were scarce, and where they could attract customers from nearby communities in Catalina, SaddleBrooke, Marana and northwest Tucson.

Stacks Book Club will sell mostly new books over used titles. Its cafe will offer locally-sourced coffees and teas, as well as a small food selection. Beers and wines will also be “as local as we can get them,” Crispin Jeffrey-Franco said.

“Books are the things we are passionate about,” he said. “Having the café to add to that experience makes it a more sustainable model for us.”

Crispin and Elizabeth’s grand plan is to see Stacks Book Club become a place for community in Oro Valley. They hope to sell wares from local makers and artists, and a section of the store will serve as a designated meeting place for book clubs and other local groups.

“You can host a group,” Crispin Jeffrey-Franco said. “You can bring friends. The community can use the space however it wants to use it.”