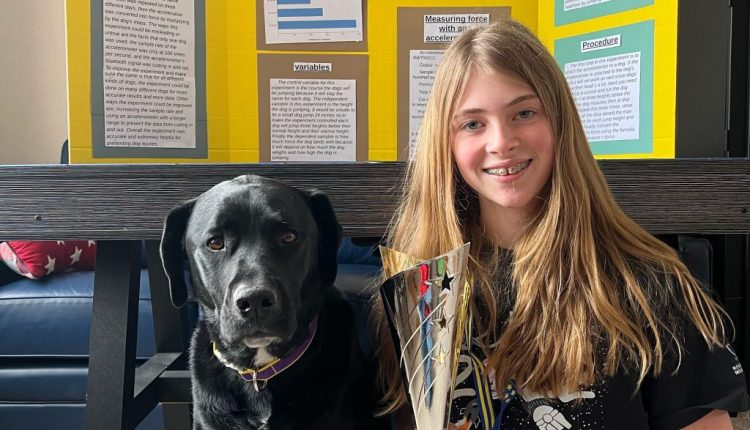 Mandy Roth, a sixth grader at Flagstaff Academy in Longmont, competes with her dog, an 80-pound mutt named Kimmie, in agility competitions.

But she was worried about the 2-foot jumps required in some of the competitions, thinking it was too high and Kimmie could get hurt. So she decided to research the issue for her required school science project, then entered it in her school fair.

“I thought my project was really cool, and I wanted to share it with more people and understand the issues in dog safety,” Roth said.

For her project, she looked at the amount of force in a dog landing when jumping at different heights, drafting Kimmie as her test subject. For her measurement, she attached an accelerometer to her dog’s rib cage using stretchy “vet wrap.”

Her main setback was a squirrel that interrupted a test session, but she successfully completed her tests and determined that the amount of force did increase with height, but not as much as she expected.

“I really like being able to say, ‘I think this will happen,’ and being able to see if that’s right or not,” she said. “It’s really cool to be able to understand the world with science and to help inspire more female scientists.”

She added that she plans to continue with agility competitions, but likely will stick to the venues that allow jumps at the lower height she prefers.

Two high school students also tied for best-in-show awards at the annual Corden Pharma Colorado Regional Science Fair, qualifying for both the state and international science fairs. The fair was held in partnership with the Boulder Valley School District.

The regional science fair, after going virtual last school year, was held in person this year at Centaurus High School, but with some pandemic safety modifications. No spectators were allowed and, instead of talking to multiple judges, each participant had 10 minutes to present to a single judge. Altogether, 171 high school and middle students registered to present 127 original, independent projects at the regional fair.

The two senior division best-in-show winners are Morgan Holien, a senior at Monarch High, and Henry Westfall, a junior at Fairview High. Along with Holien and Westfall, two Monarch High students — Allison Inge and Langley Nakari — also qualified for the international fair after they tied for first place in the earth and planetary sciences division.

Westfall was researching polarization in social networks when he decided to enter his research in the fair’s behavioral science category. His interest in the project started in 2020 as he watched the country become increasingly polarized over mask mandates, vaccines and politics.

Henry Westfall, a junior at Fairview High, poses next to his science fair project. He tied for best in show in the senior division at the annual Corden Pharma Colorado Regional Science Fair.(Courtesy photo)

“It really showed me just how crucial it was to understand this issue,” he said.

He created two simulation models plus a web application for his research, improving on the second model to address limitations he found in running the first model. The first model included human participants, though he said he struggled to find large numbers of people willing to participate.

“Recruiting is hard,” he said.

He said his project combined engineering and research, allowing him to get a “good start” on building a model for opinion dynamics and answering questions about how individuals evolve their beliefs by responding to their “social neighborhood.”

This was his third regional science fair.

Westfall, who wants to go into a science, math or engineering field, said he was proud of the work he did in the project.

“It wasn’t quite complete, but science never really ends,” he said. “There’s definitely more that I want to do on this topic.”

Holien entered a project in the math and computer sciences category. For his project, he wanted to define a mathematical operation called tetration for non-integers.

Morgan Holien, a senior at Monarch High, poses next to his science fair project. He tied for best in show in the senior division at the annual Corden Pharma Colorado Regional Science Fair.(Courtesy photo)

Along with successfully meeting his main objective, he said, he discovered several never-before-published tetrational identities.

“My research was sort of just me, sitting at my desk, doing math,” he said. “It was very informal and flexible, which is one of the reasons I enjoyed this project so much.”

He said he wasn’t expecting to succeed once he realized the complexity of the topic. But that success didn’t come without setbacks. A few days before the project was due, he said, he thought he had failed to find anything, but gathered up his notes because “I still had to submit something.”

Going through his notes, he saw an identity he had derived, then crossed off as useless, that reminded him of another equation he had just read about.

“Standing there, staring at my failure, inspiration struck suddenly and forcefully,” he said. “It felt like I’d just figured out how to divide by zero, and it was beautiful.”

Holien, who plans to consider math or physics as a career, called the opportunity to do independent research in high school “absolutely invaluable.”

“Having the experience of doing real science while I’m still in high school is an amazing experience, which I know will prepare me for this type of research in college and my career,” he said.

Mental health, substance use and homelessness

Are court reporters a thing of the past? Coconino County Superior Court only has one…