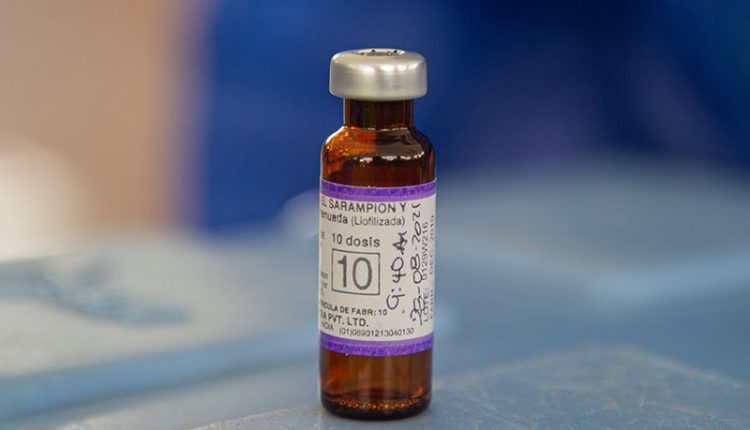 None of the three measles patients confirmed in Maricopa County had been vaccinated. Two of the patients were children. (Photo by Sebastian Barros/NurPhoto/Shutterstock)

PHOENIX – Measles is making a comeback in Maricopa County with three confirmed cases – the first since 2019. Two of the patients are children, and one of them required hospitalization.

As of Sept. 1, the Centers for Disease Control and Prevention had confirmed only 13 cases nationwide.

Symptoms of measles can include red eyes, cough, runny nose, fever and red, blotchy rashes that start near the hairline and can spread across the body, according to the CDC. Symptoms typically develop seven to 14 days after contact with the highly contagious virus, but they can take up to 21 days.

Experts say measles is rarely fatal, but it’s dangerous to children and can have long-term effects.

The standard measles vaccine is 97% effective, according to the Maricopa County Department of Public Health. But once contracted, measles runs its own course.

“Measles is super contagious, it is spread through respiratory droplets,” said Dr. Kellie Kruger of Mayo Clinic-San Tan. “You do not even need to touch someone or have direct physical contact with someone to actually get measles.”

dr Nick Staab, a medical epidemiologist with the county health department, said the first case of measles came from someone who had recently returned to Arizona from international travel.

“There is no specific treatment for measles, just take supportive care to get better,” Staab said. Supportive care means at home remedies such as rest, hydration and over the counter medications. “Even if you completely recover, there is a severe side effect that can affect you years down the road, anywhere from seven to nine years and lead to death as well,” he said.

With fewer than 10 cases of SSPE per year there is still no cure for SSPE, although prescription antiviral drugs can slow the progress.

All three cases in Maricopa County involved people who were unvaccinated – a trend that’s been growing across the country as the COVID-19 pandemic continues, and some people don’t want to get vaccinated. The pandemic also disrupted childhood immunization services, and there are increasing inequalities to access to vaccines.

The number of measles cases around the world is up substantially, according to the World Health Organization and UNICEF. In 2020, 23 million children worldwide had not received any of the basic childhood vaccinations. It is the highest number of unvaccinated children reported since 2009, and close to 4 million more than 2019 records.

Percentage-wise, Maricopa County lands right in the middle of kindergarten children being vaccinated against measles: 92.7%. In Yavapai County, the vaccination rate in the 2018-2019 school year was only 83.3%.

These rankings are based on “personal belief” exemptions, according to ADHD data collections.

Extra precaution should be taken when in close proximity to others, such as students in a classroom, to protect everyone’s safety.