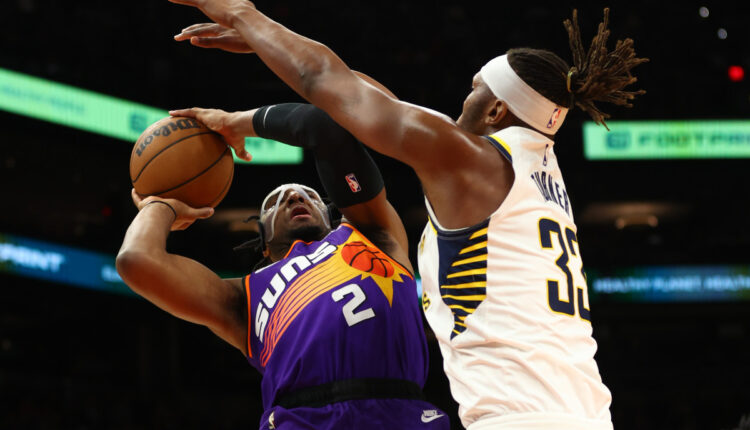 The Indiana Pacers are playing the worst basketball they’ve played in a while right now. On Saturday night they struggled against the Phoenix Suns, who were missing Devin Booker, Chris Paul, and Deandre Ayton, among others. Yet the Pacers couldn’t take advantage and get a win.

They were in the game all night. Phoenix and Indiana both struggled to gain control of the duel as there were 16 lead changes. The longest run was just 10. It was a back-and-forth affair.

That style of game suits the team that shoots better from the field, and in this game that was Phoenix. They knocked down 41.8% of their looks compared to Indiana’s 38.3%, which set them up better to eventually put the game away.

The Pacers changed their starting lineup in this game and moved TJ McConnell into the opening unit. That change helped as the Pacers starting five was a +1 for the night, but it meant Indiana’s bench units were weaker or different. The Pacers second unit shot 12/31.

In the end, the Pacers were closing the game with a similar lineup to their starting five but instead had Bennedict Mathurin in for Andrew Nembhard. That group made a push and cut an eight-point Phoenix lead down as low as two, but the Pacers never hit a shot that would have either tied the game or given them the lead.

“Indiana, today was their second game of a back-to-back and they played us wire to wire,” Suns forward Josh Okogie said after the game. He finished with 24 points and 10 rebounds and said that Phoenix’s early defense set the tone.

Indiana needed a get-right win in the worst way. They will still be without star guard Tyrese Haliburton for at least another 10 days or so, so any wins they can get in the interim with him out will be helpful. Tonight, they had a chance but couldn’t quite get it done.

There were more positives for the Pacers in this game since they kept it close, but their takeaways still show that they have things to improve on as they look to end this losing streak.

Indiana shot 36/96 in this game, good for 37.5%. That marked the sixth time this season that the Pacers shot below 40% in a game, and they have lost all six of those games.

At the simplest level of thinking about basketball, a team has to make shots to win. The Pacers aren’t making shots right now. They need to find ways to generate good looks and knock them down.

Indiana had too many fouls

The Pacers committed 29 fouls in this game, their third most in a single game this season. It was just the sixth time that the blue and gold have hacked their opponent more than 26 times in one night. They are 0-6 in those games.

Some of the Pacers’ fouls came as a result of the Suns’ relentless attacking. Those are expected. Others came after a defensive breakdown in which the Pacers were forced to recover and foul to slow down a Phoenix player. Those moments can’t happen.

The Suns had 35 free throw attempts on the night. Even though they only knocked down 24, the Pacers’ fouls really hurt their chances in this game.

TJ McConnell had an excellent outing

Less than a week after a career night in Milwaukee, TJ McConnell had another excellent outing for the Pacers. Playing as a starter for the first time of the season, the veteran guard finished with a triple double — he had 18 points, 10 rebounds, and 12 assists.

It’s just the third triple double for McConnell in the NBA and his second with the Pacers. His first with Indiana was actually a points-assists-steals triple double. Tonight was only the third time in McConnell’s career that he has grabbed 10+ rebounds in a game.

The eight-year pro has been one of the Pacers best players during their ongoing losing streak. They will need more performances like this from the 30-year old if they want to finally get back in the win column.

The Pacers will try to do exactly that in their next game, which comes on Tuesday when they host the Chicago Bulls.

Flagstaff Girls, Coconino Boys Win Round One Of The Battle Of Flagstaff Rivalry Saturday Night At Flagstaff High School