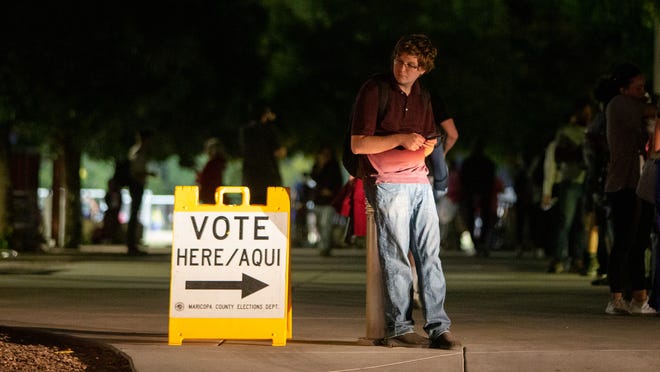 Tight races and potential for runoffs

Phoenix’s two competitive City Council contests were too close to call based on early ballot counts Tuesday, but the unofficial tallies showed tight races in both and a potential for two runoff contests in March.

Half of the city’s eight council seats are on the ballot, but the race to represent District 8 in south Phoenix and District 6 in Arcadia, the Biltmore area and parts of north central Phoenix are the most competitive.

Kevin Robinson narrowly pulled ahead in the open field of eight candidates vying to replace termed-out Sal DiCiccio in District 6.

In a race where no candidate gets more than 50% of the votes, the top two vote getters will head to a runoff in March.

Garcia was at the local painters’ union building at 24th and Van Buren Streets on Election night. Volunteers stayed in good spirits as little kids and dogs in Carlos for Phoenix City Council T-shirts ran around.

“I’m excited. I’m probably going to be in the runoff … but I’m honored to represent District 8, and I’m ready to get back to work,” Garcia said.

The results will determine how the city manages police accountability and the outcome of an ongoing US Department of Justice investigation into the Police Department and the influence that labor unions carry.

All of this comes while the city must also grapple with broad issues such as water management, climate change and affordable housing.

The candidates in each competitive race include:

Phoenix works on a fall-spring election cycle. If a candidate doesn’t secure enough votes to win a district race outright in November, the top two vote-getters in the contest will head to a runoff election in March.

The Arizona Republic will update this article throughout the night as unofficial vote tallies are available. Check back for the latest Phoenix City Council election results.

Arizona Democrats surged to large leads. Now, they wait to see if their advantage holds.