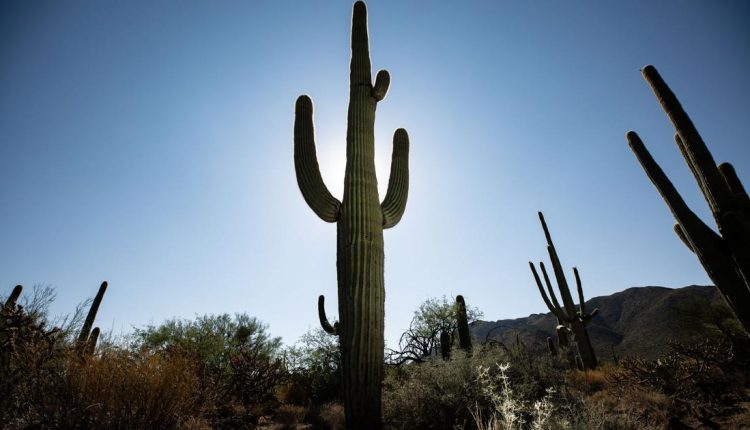 Whispers have been whipping through Tucson’s weather underground.

Tucson’s 100-degree truthers will not comply with this lie!

OK, in truth, there’s not much to comply with or worry about on this topic. Still, that record 100-degree reading last Tuesday, April 26 — the third-earliest 100-degree reading recorded in Tucson history — doesn’t make total sense.

“This has been bothering me,” KVOA chief meteorologist Matt Brode told me when I reached him Monday night. “I cannot find a satisfying meteorological explanation.”

He accepts the reading, but he finds it puzzling.

Many other Tucsonans were surprised by the report that we hit 100 degrees. Generally, that’s a milestone that we see coming for a few days. We feel the heat building, we hear the evaporative coolers and air conditioners working harder, and the forecasts begin talking about hitting “the century mark.”

Not this time, not at all.

It struck Bill Buckmaster, a fellow Tucson weather hobbyist, strangely enough that he mentioned it the next day on his radio show.

“When I first saw that on Facebook that the weather service had tweeted that we hit 100 at 12:55, I said somebody is going to have to pull that back,” he said.

Buckmaster was right that the data looks weird. Brode walked me through it.

It’s what happened to the temperature between noon and 1 pm that was really puzzling.

“I just don’t like it going from 93 to 97 with no wind in 5 minutes,” Brode said. “Meteorologically, I don’t see anything that should have raised the temperature 4 degrees in 5 minutes.”

It was early in the day for a 100-degree temperature, too. In fact, the temperature quickly went down from there, hitting 95 at 1:15 pm, then rising to 97 degrees again.

Nothing similar happened at the weather station at Davis-Monthan Air Force Base, just a few flat, open miles away. That station registered 91 degrees at 12:54 pm and 92 at 12:58 pm Meteorologist Rob Howlett, the unfortunate National Weather Service staffer who picked up my call yesterday, said as far as he knows the weather equipment at the airport is functioning correctly, and there’s no inquiry into the odd-ball 100-degree high.

“I agree it looks funny, warming up that dramatically during that 45 minute period,” Howlett said. “It could have been there was a microclimate that brought in that air during that short period of time.”

“Assuming the equipment was working properly and there wasn’t a jet engine blowing on it or something, it was just tapping into some kind of microclimate that brought in that warmer air.”

But locally it’s a big deal.

KVOA, of course, has its longstanding ice-breaking tradition. It’s one of my favorite pieces of local lore: That the ice breaks on the Santa Cruz River when it hits 100 degrees. And the station where Brode is a meteorologist, has a contest to see who can guess the correct date.

In an email, fellow TV meteorologist Erin Christiansen, of KOLD, said the jump in temperature during that noon hour was unusual to her too.

“I’ve just come to expect the unexpected. I’ve seen Tucson’s weather change quite a bit since moving here in 1997. Meteorological milestones just don’t happen the way they used to anymore. We can no longer look to the past to forecast the future.”

It’s a compelling explanation, given our changing climate.

But I’m not sure it will sell to the 100-degree truthers in the weather underground.