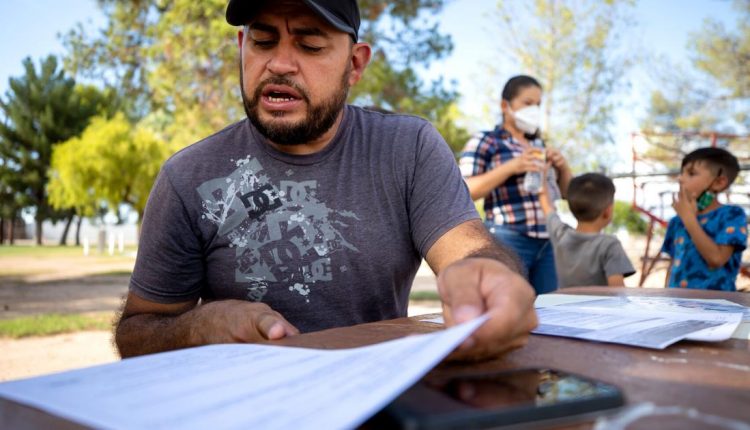 It only took a few minutes in a Tucson park before the three young brothers went off running, exploring the vast stretches of grass, sprinting to distant playground equipment.

After about 10 months of living in migrant shelters and rented rooms in Nogales, Sonora, dodging neighborhood mafiosos, the 4-to-8-year-old boys were free. It fulfilled Walter Jerezano, their father, to see that the sacrifices they’d made since fleeing violent attacks and threats in Honduras last year were not in vain.

“We resent it as adults, but the children do even more,” he said in Spanish. “They are in a stage of exploring, of moving, and in the places where we were, we were far from the natural conditions they should have.”

“Now take a look at them for yourself — where are they?” he asked, looking around the park from our seat at a table. “They have accumulated repression. At the first opportunity, they take it out, they explode.”

To my eyes, Jerezano, his wife Mabel Rápalo and their boys Walter, Axel and Brayan serve as an antidote to the border-related anger circulating in political campaigns. They’re a vibrant family who could contribute to our society if given a chance.

Their experiences also reveal key flaws in our asylum system, which we could try to fix to help relieve the pressure on Border Patrol agents operating between ports of entry — and even to address labor shortages in parts of the country.

I met the Jerezano Rápalo family by luck in February, when I went to the San Juan Bosco shelter in Nogales, Sonora, looking for Honduran migrants. An election had occurred in Honduras, ousting the old corrupt narco regime, and I was seeking Hondurans’ perspectives. I happened upon Walter, Mabel and their kids.

After I wrote that column, time passed, and I heard from Jerezano occasionally, in hard times and hopeful ones. After running out of money, Jerezano, who had operated machines in a textile factory in Honduras, ended up getting a security guard job and was able to rent a room in a house.

Then, August 21, I got an unexpected and exuberant voice message.

“Hello, my friend, my friend. Good afternoon, my dear Tim,” the message went. “I wanted to confirm to you, to let you know, man, to give you the good news that in the name of God, we are here inside, my brother, with asylum. We were blessed. I wanted to let you know that We’re here in Tucson, Arizona.”

The next day, I went to the migrant shelter in Tucson where the family was temporarily staying. Told that we couldn’t interview them there, star photographer Rebecca Sasnett and I took the family to Rudy Garcia Park, across from Tucson’s rodeo grounds, to talk and give the kids a chance to play.

A few days later, they were off to their temporary new life in Alabama, where they have a relative.

Plentiful video footage of migrant families crossing the border unimpeded and turning themselves in to Border Patrol agents has inspired criticism of the Biden administration’s policies as creating an “open border.”

But an odd thing about those videos is that many of the people crossing the border ask for asylum protection, something that under normal rules, they could do at a port of entry, not bothering Border Patrol agents, who work between ports.

At a news conference Thursday, the National Border Patrol Council announced its endorsement of Republican Blake Masters in the US Senate race against incumbent Mark Kelly, and a KOLD TV reporter asked a key question: “Why not open the ports of entry to allow asylum seekers an orderly way to ask for asylum?”

The president of the agents’ union, Brandon Judd, answered this way: “People can go to the ports of entry right now. They can claim asylum at the ports of entry. That’s a legal means to do it. That’s what we want people to do.”

He claimed migrants don’t go because the “cartels” don’t want them to.

Migrants, CBP officials and advocates all say what Judd said is not true. Migrants cannot go to ports of entry and request asylum because of a policy that Judd and the agents’ union supports — Title 42. Under that public-health measure, people walking up to the ports to request asylum are turned away.

As a result, many give up and try to cross through the desert or mountains and request asylum upon meeting Border Patrol agents.

Sitting at the park, Walter Jerezano acknowledged that he and his family considered “more than once” crossing the border between ports.

“It would be a lie to deny it,” he said. “But once we learned about asylum, the right we have to request it, and the legal possibilities to do things correctly, we understood that was the right thing.”

People like the Jerezano-Rápalo family are making it through thanks to a CBP program that allows exemptions from Title 42 restrictions. Shelters such as the Kino Border Initiative and the Casa de la Misericordia in Nogales, Sonora work with lawyers from allied groups to select particularly vulnerable migrants and submit their cases as meriting exemption.

Then Customs and Border Protection officials decide if they will let them into the United States to pursue an asylum claim. People with red flags like criminal records or previous deportations aren’t considered in the first place.


The Arizona Justice for our Neighbors Project has helped 733 asylum seekers enter the United States this way this year, said Alba Jaramillo, co-executive director of the group’s national organization. But the process leaves her uneasy.

“It’s good we’ve been able to help,” she said Friday. “But it really shouldn’t be us. We’re almost playing God.”

Those they are able to help are a relative few, she said, and the rest are exposed to the dangers of the border cities where they’re stuck, or desert crossings.

“Title 42 is a deadly policy,” she said, noting the large number of border-crossers who have died this year. “Every day that policy in place is costing the lives of vulnerable asylum seekers.”

In the case of the Jerezano-Rápalo family, they filled out documentation and declarations, submitted them to Jaramillo’s group, and were accepted by CBP within a relatively short time. Crossing the border Aug. 18 didn’t even involve a credible-fear interview. They were prescreened.

Mabel Rápalo walks in Rudy Garcia Park in Tucson as her children play on the swings.

A million people also entered over two Trump years, the Times reported, citing data compiled by the Migration Policy Institute. These are huge numbers, but we can’t expect to be able to stop migration altogether — only manage it.

We should want anyone seeking asylum to come through ports of entry, screened by officials with relevant knowledge, as happened with the Jerezano-Rápalo family. We shouldn’t ask Border Patrol agents to make these calls on the fly in the middle of the night. But, more than we need more agents, we need more immigration staff to process these claims and accelerate decisions on asylum claims.

If people are allowed in, they should be able to support themselves. As it stands, people admitted to pursue an asylum claim can’t even apply for work authorization until 150 days have passed since their asylum application, and can’t get permission for six months. The asylum process may last years, though the vast majority of applications fail.

A bill introduced by Sen. Kyrsten Sinema this year would allow asylum-seekers to apply for a work permit immediately, but so far it has gotten nowhere.

If we want to start solving our immigration problems, we could start with little tweaks like this. But we should move on to ensuring asylum-seekers go through the ports of entry as the Jerezano-Rapalo family did before arriving in cities like Tucson and get their claims heard faster.

Driving back to the shelter, Jerezano said the whole experience felt surreal.

“I’m amazed by how the world is so big and so small at the same time, by how life is so complicated and so simple at the same time,” he said. “I can’t explain situations like this, including sitting right here with you.”