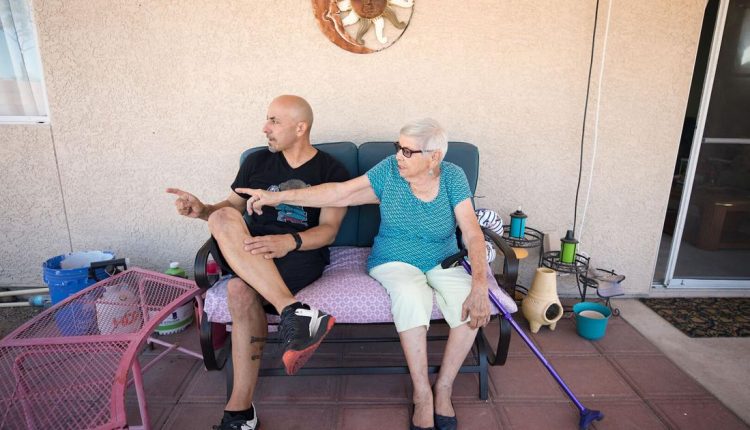 Their story started in rural Nayarit, where a girl named Benita scratched for leftover beans in harvested fields and scraped the thin layer of fruit off discarded banana peels.

It wound through so many places — among them, San Luis Rio Colorado, Sonora; Salinas and El Monte, California; Yuma.

Now it’s winding down, comfortably and without hunger, in suburban Tucson.

dr Julio Garcia, who saw patients for 12 1/2 years at Oro Valley Family Practice, and the grandmother who raised him, Benita Ibarra, 87, are together again, for the duration.

Their story is like so many others — a grandparent raising their grandchild, a middle-aged person caring for an older family member. But so unique to them.

“I learned from a young age — I don’t know when — that my situation was different,” Garcia said. “And I learned that my grandmother’s circumstances coming from abuse and coming from all that stuff were different.”

Ibarra’s own mother died in childbirth when Ibarra was 6, living on a rancho just south of the Sinaloa border. That made her bringing rough.

“We were hungry,” Ibarra said in Spanish when I interviewed her and her grandson last month. “My sister and I would walk the streets and if we saw banana peels, we’d clean them off. Half for me, half for her.”

She left as a teen and ended up in San Luis Rio Colorado, eventually having five children of her own. Once she got a visa to spend 72 hours in the border zone of the United States, and she overstayed, going to Los Angeles and then north to Salinas where she worked in the fields.

Potatoes, chiles, grapes, oranges, strawberries. With that, the family eventually got established in the United States and over time gained citizenship, but it remained a tough life, with sometimes rocky relationships with her children.

‘From that time forward, he was mine’

Garcia was born in an unhappy circumstance, to Ibarra’s youngest daughter when she was a teen.

“He was about 2 months old when she left,” Ibarra said. “I bought a cradle, I gave him his bottle and put on his Pampers. I bought him a velvet monkey.”

“From that time forward, he was mine.”

Life in El Monte, a suburb of Los Angeles, was not easy for Garcia as he grew into boyhood.

“The reason we had to leave is I was getting jumped by gang kids,” he said. “I was hiding it from her, but one time I showed up and I couldn’t hide it from her.”

So the two of them moved to Yuma, where family members lived, when he was 11. They were able to buy a rudimentary 700-square-foot house in part thanks to a divorce settlement from a man she was married to in El Monte. At first it had no working plumbing or cooling — in Yuma.

They went to work, as a team, to make ends meet. Ibarra couldn’t do physical labor anymore because the stooping in the fields had ruined her back, but she would go to San Luis Rio Colorado to buy candy and gum and Mexican sodas, then sell them door to door in their Yuma neighborhood.

They also made tamales — green corn, pork, beef, chicken — and sold them for just five dollars a dozen. Garcia would work the cast-iron grinder, one of many jobs he worked from the age of 12.

“We paid a lot of bills this way,” Garcia said. “To this day I don’t eat corn tamales.”

Garcia found his classes at Yuma High School easy, but his own plans were just to find a job after graduation. Instead, people suggested he apply to college. He was accepted at the University of Arizona.

Photos of Benita Ibarra, left, from 1982, and Julio Garcia in high school sit on a shelf in the home of Ibarra in Oro Valley.


‘People could sense that my grandma raised me’

The experience was up and down, Garcia said. He started well, then descended.

“I don’t remember what the number was, but my grade point average was in the 2 point something (range),” he said. “I got a letter from the school saying I was in trouble.”

Then a friend recommended nutrition and anatomy classes. A switch flipped for him. It took seven years, but he got bachelor’s degrees in nutritional science and psychology, then moved on to medical school, accepted on his second try.

Medical school was no easy ride either. Garcia had injured his back while sledding on Mount Lemmon in earlier years, and while in medical school he needed two spinal surgeries for it, causing him to miss a year, he said. Eventually, though, he earned his degree and went into family practice.

At the Oro Valley clinic, he happened to inherit a slate of older patients, and he found that matched the skills he had developed growing up with his grandma.

“Over the years, people could sense that my grandma raised me, and so I ended up being in geriatrics for the most part,” he said.

David and Kathy Peters of Catalina were referred to him by their neighbor and were patients of Garcia for almost his whole time there.

“He was probably the best (doctor) we ever had,” said David Peters, 91. “He was always on top of everything.”

‘He’s always been good with me’

Garcia was also keeping tabs on the woman who raised him. Ibarra, in Yuma, had of course felt lonely since he left for Tucson.

“He never abandoned me though,” she said. “He was always going there” to Yuma.

That relationship became tricky as Ibarra aged, especially during the pandemic. Last year, she fell in February and broke her hip. Garcia thought she was getting better, but late last year he realized she was fading.

“At one point I called her in December and she sounded bad,” he said. “I was like ‘What’s going on?’ She said she fell again. I was talking to my wife and she said, ‘Just go get her.’ “

Garcia and his wife, Lisa, had bought a home in Oro Valley in May, anticipating moving Ibarra out, but had been renting it as an AirBnb. Now they put it to use.

At the same time, Garcia said, his own back injury was making it impossible for him to fulfill his obligations at the practice by seeing patients for a full day. So he quit the practice to dedicate his time to the grandmother who raised him, while working a much-reduced schedule elsewhere.

And here’s the magical thing: Ibarra got better. Since she moved to Oro Valley, her blood pressure has gone down. She hasn’t fallen once. She likes going out in the backyard and enjoying the breezes off nearby Pusch Ridge.

“There I felt like I was dying because I felt terrible,” Ibarra said of her old Yuma home. “I fell down five times.”

“I’m so content, and they never leave me alone,” she said. “He’s always been good with me.”

Of course, the same is true of her. They’ve always been a team.