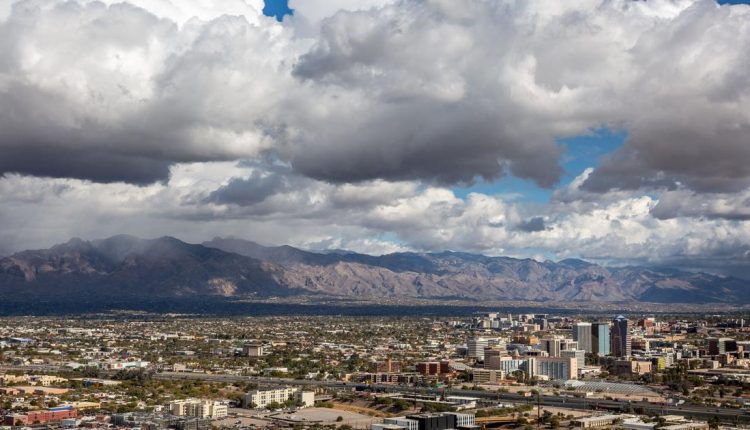 Today is expected to be sunny with some morning clouds and a high of 102 degrees and a low of 68 with winds out of the southwest at 10-20 mph during the day.

Last year on this date the high was 102 and the low 73. Fifty years ago the high was 94 and a thunderstorm dropped 0.4 inches of rain on parts of Tucson.

Today is expected to be sunny with a high of 102 degrees and a low of 69. The humidity will be about 10 percent.

A dust-devil with the oomph of a tornado dipped into Tucson yesterday afternoon and slammed tons of corrugated steel roofing along N. 5th avenue at E. 7th street.

A new car was buried and two other cars damaged.

Nearly a half-block of steel and beam roof was ripped off the Arizona Lumber and Supply Co.

A pedestrian was lifted four inches off the sidewalk.

“I managed to grab some iron bars on a store window as I zoomed upward or I might have ended up in the sky,” said Clifford Young, 2237 N. Ralph Ave. “It was terrifying … funniest feeling, like I had no weight and was nothing.”

Damage to the lumber company warehouse was estimated at several thousand dollars.

The whole roof was lifted into the sky – along with a dark mass of boxes, cans, signs, sod and miscellaneous items – and showered down on the normally busy intersection.

A half-dozen steel sections the size of a billboard were pitched against the Oliver Drachman Cleaning plant a half-block across the intersection.

Miraculously, police said, no one was hurt. The three damaged cars were parked and empty. No one happened to be walking along either street at or near the intersection.

Scores of witnesses nearby said the dust-devil came in with the roar of a locomotive, striking with a thunderous metallic clang.

Two blocks to the northwest, a finger of the whirlwind raked the corrugated roof off an auto wash building on E. 6th street a half block west of N. 6th avenue.

A 20-foot-long hunk of metal was wrapped neatly around the top of a power pole. Another sheet sliced ​​through two power lines, leaving them dangling dangerously.

Ownership of the new car buried under 100-foot strips of metal roofing was undetermined late yesterday. Police said it would be up to the lumber company to get wrecking crews to remove the debris.

Today is expected to be sunny with a high around 99 degrees with humidity at 21 percent. The dewpoint is 36 degrees and the overnight low should be about 65 degrees.

Today’s high is expected to be 99 degrees, with humidity at 13 percent. The dew point is 26 degrees. The overnight low is forecast as 64 degrees.

Johanna Eubank is a digital producer for the Arizona Daily Star and tucson.com. She has been with the Star in various capacities since 1991.