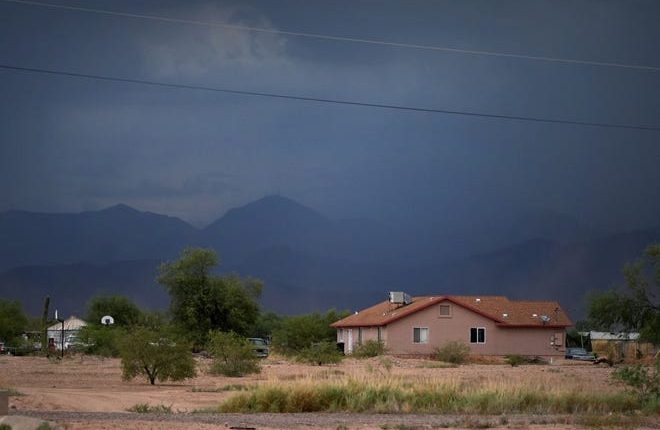 The National Weather Service in Las Vegas issued a tornado warning for north-central Mohave County in Arizona at 4:51 pm on Sunday.

“A confirmed tornado was located 23 miles southeast of Littlefield, moving south at 30 mph,” said the weather service in Las Vegas.

Residents were advised to seek shelter.

Monsoonal activity continues in Arizona as thunderstorms were possible across the state on Sunday with higher chances in the northern areas, according to the weather service.

Storms were expected to develop in northern areas and spread toward the south to the lower deserts throughout Sunday afternoon and evening, according to Bianca Feldkircher, a meteorologist with the weather service in Phoenix.

There was a 60% to 70% chance of rain in Flagstaff on Sunday afternoon, Benji Johnson, a meteorologist for the weather service in Flagstaff, said. Storm activity was expected to decrease on Monday and Tuesday and pick up again on Wednesday in this area.

“Monday and Tuesday are definitely the days with the least chance of precipitation, but we have a chance for storms every day for the next week,” Johnson said.

With storms there is always a flood chance depending on where the rain falls and how quickly it falls, Johnson said. The higher chances of flooding were expected to be on Sunday and Wednesday.

In Phoenix, the chances of thunderstorms on Sunday were about 30% and Feldkircher said strong winds around 40 mph to 50 mph could be seen. The following days are expected to be three and isolated thunderstorms could develop in the area on Monday and Tuesday.

“It’s not like completely dry where we weren’t expecting anything. It’s just going to be a lot less than what we saw in the past few days,” Feldkircher said.

On Wednesday, there was a chance for stronger storms in the Phoenix area but it will be three again over the next weekend, according to Feldkircher. She said widespread floods were not expected but there could be localized flooding.

Thunderstorms chances in Tucson were about 40% to 50% on Sunday, according to Rob Howlett, a meteorologist with the weather service in Tucson.

“We’ve got another day of typical monsoon thunderstorm activity where we have chances of rain across southeastern Arizona, and it’s going to continue here for the next several days. It looks like we’re going to remain moist and keep having our daily rounds of showers and thunderstorms,” Howlett said.

Over the next few days, the thunderstorm chances in Tucson would range between 30% and 60%, according to Howlett. He said some isolated areas could experience flooding.

The storm activity will decrease a little bit over the next weekend in Tucson.

Temperatures were expected to be average or a little below average in Flagstaff and Tucson throughout next week. In Flagstaff highs around the 70s and lows in the 50s are likely, according to Johnson. Tucson will see temperatures in the mid- and upper 90s throughout the week, Howlett said.

In Phoenix, the temperatures will stay below normal throughout the week and by Tuesday they will start getting closer to around 100 degrees. The highest temperature of the week was expected to be around 103 degrees.

Phoenix from the Ashes review – Finally a glimpse into Stokes’ world in this raw, remarkable film