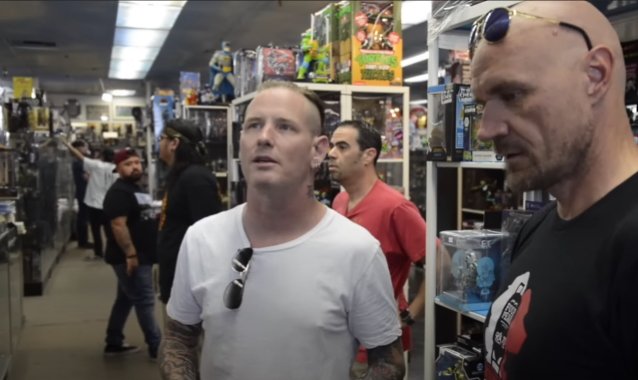 Arizona rock radio station KUPD recently took SLIPKNOT frontman Corey Taylor out toy shopping before his big show with his bandmates as part of the “Knotfest Roadshow”. They went to collector’s marketplace in Phoenix and Corey shopped for his favorite toys and talked about the band’s new album, “The End, So Far”. Check out the video below.

Last month, Corey announced a very special livestream event, “Half Sold Out: CMFT Live At The Palladium”, which is set to broadcast from the world-renowned London venue on October 17. The sold-out London Palladium show, also featuring THE CHERRY BOMBS, will be a benefit event for The Taylor Foundation, Corey’s charity that supports and uplifts military veterans, emergency personnel and their families, living with post-traumatic stress disorder (PTSD).

The intimate and special evening is the first date of Corey’s first-ever UK solo band tour, which also includes sold-out shows in Manchester, Hull and Swansea.

During an appearance on the August 30 episode of SiriusXM’s “Trunk Nation With Eddie Trunk”, Taylor revealed that he will enter the studio in January and February 2023 to record his second solo album. “We’re gonna go in and bang it out and get it ready,” he said. “And then once I’m done touring with SLIPKNOT, I’m gonna throw together a really rad, ‘rock is back’ kind of tour for the solo stuff and start bringing out some of the younger — maybe not even some of the younger rock bands, but just some of the bands that don’t get the chance or just don’t get the looks that are afforded to either pop bands and hip-hop bands or people like me who are kind of grandfathered in. So I’ m gonna try and really kind of fly the rock flag and give some opportunities to some of the younger bands and maybe even just the mid-level bands that just haven’t had a shot. ‘Cause there’s so many great bands out there.”

Taylor went on to confirm that all the material has already been written for his follow-up to 2020’s “CMFT”. “It’s about 15 songs,” he said. “And it’s one of those cool things where some of it’s older stuff that I’ve written over the years. There’s actually a couple of songs that some of the fans know because I debuted them live when I was doing the JBKB [COREY TAYOR & THE JUNK BEER KIDNAP BAND] thing. So there’s a song like ‘Beyond’ and a song like ‘Breath Of Fresh Smoke’ — both of those songs are getting recorded and released finally after… God, how many goddamn years would it be? Probably about 14 years, 16 years. But then a bunch of newer stuff. And there’s definitely a darker edge to it. It’s still very melodic, but I’m definitely starting to kind of bring together the things that I’m known for. And it’s less an homage to the stuff that I grew up on and more of what people are used to hearing from me — but still a solo album. So there’s still great rock and roll on it. There’s some heavier stuff, but there’s some really great slower stuff. It’s gonna be really rad.”

“CMFT” made impressive debuts on charts around the world, entering at No. 1 on Billboard’s Current Hard Rock Albums chart, while claiming No. 2 on Current Rock Albums, No. 6 on Vinyl Albums, and No. 9 on the Top Albums chart. Furthermore, “CMFT” landed Top 10 on the official album charts in Australia, Germany, Switzerland and Austria, with Top 20 debuts in the United Kingdom, Finland and Japan (international chart).

“CMFT” had been a long time coming for Taylor, with newly written tracks alongside some dating back to his teens. The album was highlighted by the singles “Culture Head”, “HWY 666”, “CMFT Must Be Stopped” (featuring Tech N9ne and Kid Bookie),and the Active Rock radio hit “Black Eyes Blue”. So Taylor hit No. 1 on Billboard’s Hard Rock Songwriters chart following the unprecedented debut of “Black Eyes Blue” and “CMFT Must Be Stopped”.

Last year, Taylor made history as he reached No. 1 at Active Rock Radio with his powerful single “Black Eyes Blue”. The achievement put Taylor in a class all his own, making him the first artist in the history of the format to reach No. 1 with three separate projects, following chart-topping efforts from SLIPKNOT and STONE SOUR.