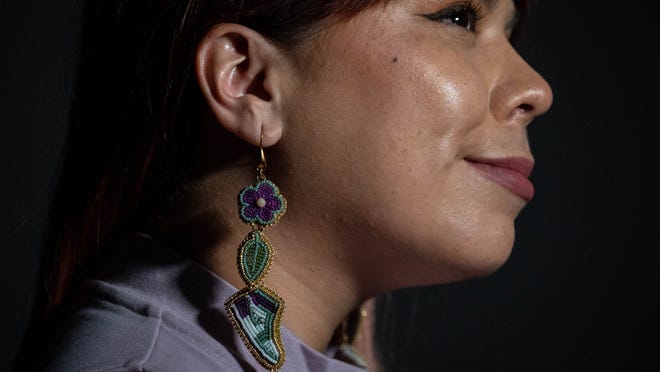 You could say creating is in Tracie Jackson’s DNA.

She’s a fourth-generation Diné artist who learned everything she knows about jewelry making from her relatives, who work with silver.

So, when the opportunity arose to combine her two passions — jewelry and sneakers — she jumped at the chance.

Today, Jackson is a lead footwear designer at Nike’s N7 line of shoes and apparel aimed at Native and Indigenous communities and the founder of Resilient Soles, an online store that sells handmade sneaker-themed jewelry.

As she wrote on her website, she uses her work “to challenge stereotypes and create new and authentic representation through art for the Indigenous community.”

More:Her family made tortillas in Phoenix for 60 years. Now, she’s a Hall of Famer

It all began with some wires and beads

When Tracie Jackson was about 5 years old, she told her grandmother Maryetta Jackson that she wanted to help make jewelry.

Her grandparents babysat her often since they worked from home, playing as they worked. Maryetta gave Tracie some memory wires and a bunch of beads.

Anything Tracie made, her grandparents took with them to sell at Oak Creek Vista, a dramatic overlook of Oak Creek Canyon on State Route 89A between Flagstaff and Sedona.

The money from those sales was put into a savings account for anything she wanted to purchase, Maryetta Jackson said.

‘Basketball was such a big part of my life’

Tracie’s artistic drive was always in her, Maryetta said. So what her passion for sports.

She grew up in Flagstaff among a family of athletes. Physical activity was encouraged as a way to lead a healthy life.

Basketball was the sport she played the most. She wore shorts and sweatpants so she could play during recess. On the weekends, she either played in Native basketball tournaments with her cousins ​​or played club basketball with her team, Jackson said.

“Basketball was such a big part of my life when I was growing up. I was a huge Phoenix Suns fan, always. I mean, I grew up with Steve Nash, Amar’e Stoudemire and Raja Bell,” Jackson said.

When Jackson wasn’t practicing or playing basketball, she was playing with colors and styles on Nike ID, an online tool used to custom design shoes. She designed basketball shoes to match a player’s position, although she never bought them or got them made.

“A lot of my inspiration with shoes came from the fact that I did not have an outlet to create specific ones. I was like, ‘Well, I’m gonna do my own.’ I even started coloring my own shoes and customizing them myself to make them into what I liked,” Jackson said.

Jackson was rocking her first pair of Jordan 3s — black ones with zebra print — at the Lori Piestewa National Native American basketball tournament in Phoenix in 2009 when she was hit with a realization as someone walked by wearing a Nike N7 jock string bag.

The logo was adorned with a medicine wheel.

Her inspiration was born: She could combine Native culture and sports culture, and she spent the rest of her adolescence working to become a designer at N7.

“My community was at the center of my passion for wanting to get there. No matter what I did, I always wanted to center it around the Native community.

“I have always loved sneakers but it’s kind of funny because I kind of feel like I am living out my great-grandfather’s legacy, who was both a medicine man and a moccasin maker but from a different lens,” Jackson said.

She applied to just one college, the University of Oregon in Eugene, where Nike was founded. She enrolled in 2013, and in 2017 she landed a graphic design internship at Nike headquarters in Beaverton, where she worked on a collection for Taboo, a member of the Black Eyed Peas.

The Arizona Republic reached out to Nike to discuss Jackson’s career. The company declined to comment.

What is the Nike N7 Collection?

The Nike N7 Collection is a shoe and retail line named after the seventh-generation principle, espoused by the Haudenosaunee people. It states that the decisions we make today will have an effect seven generations into the future.

Jackson’s first job was as a cultural teacher for N7 in Flagstaff before she received a call to work on a contract job for legendary Nike sneaker designer Tinker Hatfield that eventually led to her full-time job as a designer.

One of her favorite parts about working at Nike is the ability to tell stories from a Native perspective.

“The ability to use design motifs, textures, colors in a way that showcases culture that the Native community knows firsthand at the forefront has been really cool,” Jackson said.

‘I was really inspired by my great-grandmother’s story’

Take, for example, the first Nike N7 collection she did in 2019.

It was a collaboration between N7 and Pendleton Woolen Mills, a textile company based in Portland, to bring awareness to the history of the Navajo Nation and how they played a role in teaching Pendleton employees the craft of rug weaving. The company spent six months in the Southwest learning from Navajo, Hopi and Zuni people, Jackson said.

The collection was dedicated to her great-grandmother Phoebe Nez, a rug weaver, who died in September 2009. Nike Air Zoom Pegasus, Air Jordan 8 Retro, Zoom Heritage, Air Moc shoes and blankets were part of the collection.

“I was really inspired by my great grandmother’s story. She used to tell me that everything has a place for why it’s there. It’s about being intentional about how you put things together,” Jackson said.

What really meant a lot to Jackson was the Pendleton blanket that was designed to accompany the collection.

“It made me really happy because I never actually got to finish the blanket that my great-grandmother and I first started together because after someone passes away someone else has to do it. So, the blanket we made with Pendleton was a blanket we got to make together,” Jackson said.

How Resilient Soles got its start

Jackson was finally incorporating Native culture and sneaker culture in her professional life. Now she wanted to find a way to incorporate them in a more personal way.

In 2018, Jackson was bedridden, recovering from knee surgery. Needing something productive to do, she got back into beading.

“I started beading and started making earrings. It really helped with my mental health. It really kept me sane during that time because like I couldn’t do anything. That’s where I kind of fell in love with beading and I felt like it really saved me in a way,” Jackson said.

Jackson began to notice a lack of Native jewelry that matched her outfits or sneakers. All of the jewelry she came across was either too contemporary or too traditional.

Since she typically wears athletic clothes every day, Jackson began to think about the kind of earrings “that are just as bling but matched the look in an athletic way.”

“It’s like, if I’m going to a basketball game then I will be wearing a jersey so what would best pair with my outfit? Hoops are nice, but that’s always done … I wanted to start by focusing on fashion for femmes and mascs who don’t want the couture look — something that’s more casual but still out there,” Jackson said.

Jackson worked with her grandparents to brainstorm and make metal jewelry to adorn sneaker laces. Her grandmother cut the silver, her grandfather did the soldering and Jackson put the pieces on the sneakers and photographed them.

The jewelry often has themes that vary by season. Earrings come in colorful hues with details like hearts and flowers. Prices vary; customers can generally expect to spend upwards of $75 per piece.

Drops and previews of new pieces are announced on the Recilient Soles Instagram page. Jackson hopes to expand her store by adding bracelets, rings, necklaces, artwork and beaded sneakers.

While she loves her work at Nike, Resilient Soles offers Jackson freedom to “do my own designs, go my own route and tell my own stories. It is an amplification of your expression and your identity through jewelry,” she said.

To offer the Native community and sneaker lovers alike items they would not find anywhere else is especially meaningful to Jackson.

“To hear people that I don’t know but have a connection to me through either a family member or friend message me directly and say that they support my journey makes me feel really good … All of those little insights that I get from people along the way also guarantee that I am doing what I am doing in the right way,” Jackson said.

‘Our cultures are not disappearing, they are evolving’

Indigenous people have a long history of adapting athleisure fashion in their own unique ways, Jackson said.

“My community has always been sporting Nike with traditional clothing. It basically becomes a part of us; we indigenize it in our own way. To see these kids rocking their braids with a Nike hoodie or they have their Native shorts paired with a pair of Jordans. You can see how proud they are and and how confident it makes them,” Jackson said.

She wants to encourage Native youth to wear clothes that make them feel 100% secure in their identity, whether that clothing is Nike or anything else, Jackson said.

Jackson does more than provide fashion inspiration to Native youths, according to her close friend Bert Correa. She shows young people that they too can occupy these spaces.

Her work serves as an example of the evolution of Native culture, a way of dispelling misconceptions and stereotypes about Indigenous people, said Correa, who is of Taino descent.

“It’s proof that our cultures are not disappearing, they are evolving. Those examples can be found in the designing she does for the apparel collections, footwear and her personal artwork. A juxtaposition of the old and the new,” Correa said.

Jackson’s legacy will be one of innovation and advocacy as she preserves the relevance of Indigenous culture thorough sneakers, Correa said.

‘Never change who you are’

For young people interested in making unconventional things that have never been seen before, Jackson has one piece of advice:

“I would say to never change who you are, which I know a lot of people say all the time.”

“But be yourself. I have never once changed the way I talk or think. I know I was hired for a reason because of the expertise and intergenerational wisdom I bring, not because I was supposed to be molded into something,” Jackson said.

To Native youth she wants to emphasize the importance of staying true to yourself because “you carry that intergenerational wisdom that people have never heard before — that’s your superpower. Just be confident and remember that you are worthy,” Jackson said.