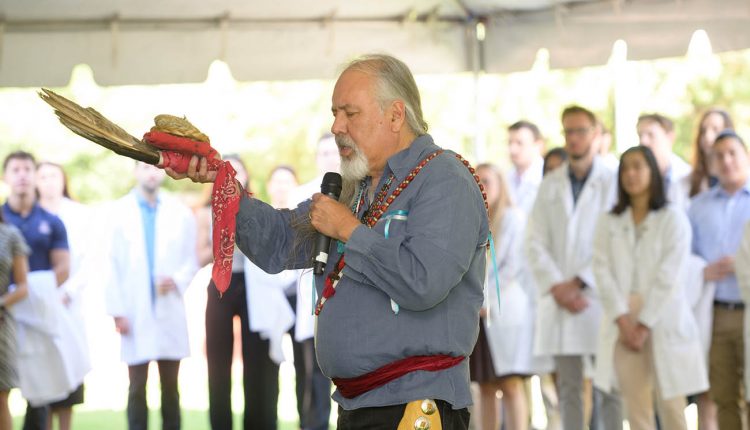 Traditional Blessing Ceremonies Held at Colleges of Medicine—Phoenix and Tucson

The College of Medicine – Phoenix ceremony welcomed Native American medical students to the new academic year with a ceremony led by Native American traditional healer Miguel Flores Jr. of the Pascua Yaqui and Tohono O’odham tribes. In addition to blessing all attendees, seven Native American students, faculty members and staff members were honored during the ceremony.

Flores said the blessing is for Native people to remember where they come from and gain a sense of grounding and balance.

“The prayer of the four directions instills a cleansing of the Spirit,” he explained. “The smoke goes up to whatever your higher power is and takes away any negative energy you have.”

Flores also performed a family song, which he said is to help the students remember who they are as indigenous people and remind them they’re not alone in their educational journey.

In late August, medical students and faculty at the College of Medicine – Tucson took part in a traditional Native American blessing ceremony and a tree planting to honor those who passed away and donated their bodies to science. Medical students from both colleges of medicine learn the basics of human anatomy through the College of Medicine – Tucson Willed Body Program, which allows individuals to donate their bodies so that students may gain valuable hands-on medical training.

The ceremony was led by Carlos Gonzales, MDassistant dean of curricular affairs and associate professor of family and community medicine.

The annual event, known as the Tree Blessing Ceremony, took place in the Dr. Norman Koelling Willed Body Memorial Garden. The garden was created to “honor and esteem those who have supported science, medicine and education through the ultimate contribution of their body.”

After the Tree Blessing Ceremony, participants planted the tree, with each person taking a turn shoveling dirt into the hole. Ashes from the herbs burned during the ceremony were mixed with the dirt.