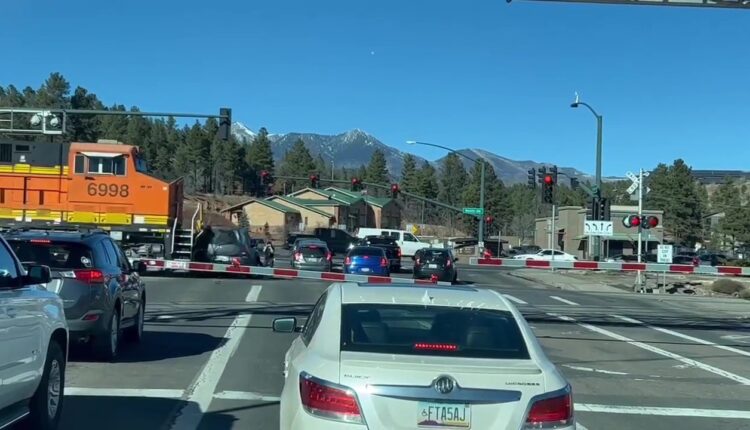 FLAGSTAFF, Ariz. – Several people narrowly escaped being hit by a train passing through flagstaff on Christmas Eve, and the incident was caught on video.

At around 1:45 pm near Route 66 and Ponderosa Parkway, a car was partially stopped on the railroad tracks as the railroad crossing arms came down. The people inside the car saw the train headed toward them and rain from the car.

In a video sent to FOX 10 by Jeff Weingartz, you can see the people walking away from the car, as well as some other cars that were very close to the railway. Weingartz said that a train had passed, so the cars drove up to the crosswalk, and then the arms came down again and another train passed in another direction.

“There are three sets of tracks there, I believe, one train had went through westbound without incident, then the crossing arms went up, and the lights went off. Traffic began to move forward, but the light at Route 66 was red. There is only enough room for two cars between the stop line and the tracks. But there were probably 3 or four cars stacked up in each lane. There were actually more cars that had pulled onto the tracks, but were able to back up when they saw The gates came down again. That gray car to the left was under the gate when it came down. So yes, the gates came back down for an eastbound train just a few seconds after the first train had passed,” Weingartz recalled.

Flagstaff Fire says a person was treated for an injury but is OK.