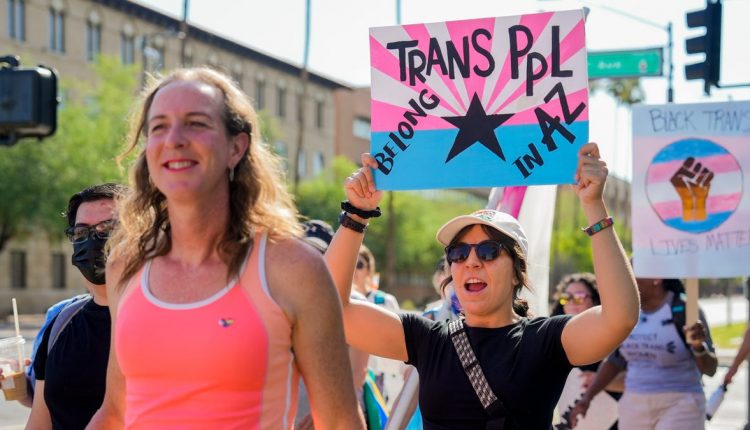 Members of the LGBTQ community and allies gathered to march at the Arizona State Capitol on Saturday morning as part of a national movement to protest legislation targeting transgender people across the United States.

The march comes about a month after the US Supreme Court’s decision to overturn Roe v. Calf. According to protesters, both issues are “intersectional” as abortion bans could disproportionately affect transgender women.

“Roe isn’t the end, it is the beginning,” said Reyna Guerra, an event organizer and founder of Queerizona. “With a conservatively-packed Supreme Court, we don’t have protections, especially in a state like Arizona.”

Signatures come up short: Abortion right won’t be on the ballot

According to Noelle Canez, Secretary and Creative Director of Queerizona, 130 bills targeting transgender people have been introduced nationwide, 14 of which are from Arizona.

One of these bills restricting surgery for transgender youth and banning their participation in sports was passed by the Arizona government in April, causing dissent among transgender rights activists.

“We are demonstrating in response to these bills. Trans people at the state level are not being taken care of. Safety-wise, healthcare-wise. For me, it feels like a violation of the constitution.” Guerra said.

‘We just want the right to be equal’

The crowd of more than 200 people marched around the State Capitol holding signs and banners and chanting “Trans rights are human rights.”

Carolyn Burke said she attended the Saturday rally to support her 15-year-old child, Nex Smith, who identified as non-binary.

Burke said with the passing of bills targeting transgender youth in Arizona it’s important for her to keep fighting to protect other teenagers like her child.

Arizona trangender bill: This woman wants transgender youth to learn from her experience

“I don’t really understand the purpose (of the bills) other than opposition,” Burke said.

Smith said they came to the rally for themselves and their friends who also identify as non-binary.

Smith said they consider themselves fortunate to have been surrounded by a supportive environment at home and in school, yet they said they fear that is being threatened by state bills restricting the freedoms of transgender people.

“The situation is bad, but I think no matter what happens, we have to be ourselves,” Smith said.

But Canez said those restrictions could fuel discrimination and even violence against LGBTQ community members.

“There is fear we are going to be treated badly as a result, that’s the way that trans people and gender non-conforming people get treated after all these bills get introduced,” Canez said “These bills tell the rest of the community ‘These people are different. They’re doing something different, something maybe wrong. That’s why we have to pass this law.'”

According to Canez, the court’s decision in Roe v. Wade intensified concerns about issues like access to healthcare and privacy of transgender people with their doctors, among other freedoms.

“We just want the right to be equal, and choose things for ourselves without the government having to tell us what to do,” Canez said. “Whether that is to choose to go forward with birth or not, or if it’s to choose whether or not you want to have reassignment surgery, or if you want to choose the pronouns that you go by.”

Susan Massey with Radical Women Phoenix, who was also present at the march, said she believes fighting for reproductive rights also stands for bodily autonomy of trangender people.

Massey said she believes it is important to mobilize and strategize for both causes to be more effective in challenging conservative efforts to “threaten reproductive and transgender rights,” she said.

“We want Arizona to know that Trans people have been here, we are here and we will always be here. They are our neighbors, coworkers, community members, and friends, and they deserve the same exact rights as every other American,” Canez said.