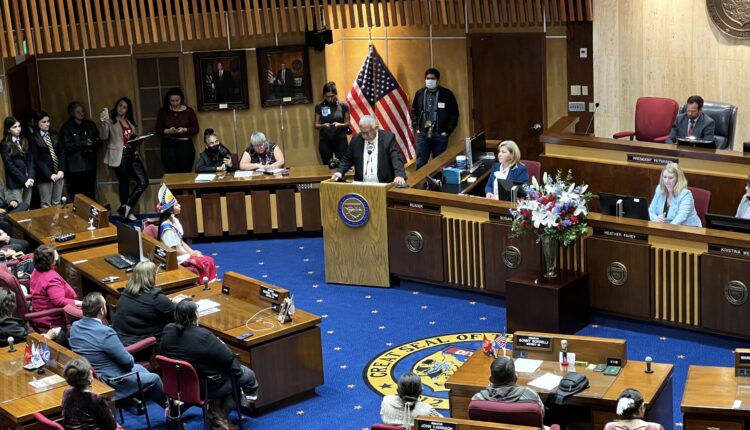 Dozens of people from tribal nations across Arizona gathered this week at the state Capitol to celebrate Indian Nations and Tribes Legislative Day.

“Arizona is a stronger state because of the 22 federally recognized tribes found here,” state Senate President Warren Petersen said during his speech.“As we enter the first week of the 56th legislative session, we’re anticipating significant improvements to our water supply, infrastructure, and broadband.”

“We cherish our ongoing collaboration with our tribal community to develop viable solutions,” Petersen said.

Standing at the podium on the Senate floor, Rambler addressed the packed room, giving a passionate speech about tribal nations, the importance of water and issues that state legislators need to care about.

“Tribes contribute billions of dollars to the state’s economy,” he said.

Arizona towns and counties depend upon tribes, Rambler said, because tribal citizens rely on the goods and services from small businesses and corporations near their tribal lands.

“Our economic and social impact matters, and yet our contributions, our partnership with citizens across Arizona remains undervalued,” he added.

Tribal lands make up one-third of the state, Rambler said, and tribes control one-third of Arizona’s surface water. Tribes are also the third largest employer in Arizona, yet Indigenous people only make up about 5% of the state’s population.

Rambler talked about how it is appreciated that there is a tribal liaison’s office established in the state, as well as a day like tribal Nations legislative day. Still, he said he believes it’s time for the state to elevate its support for Indigenous communities.

“It is time for Arizona to establish and fund a robust, cabinet-level Indian Affairs Department,” he said, eliciting cheers from attendees. “We need to work more closely as partners on the issues we all face.”

One of the most critical issues that Rambler highlighted in his speech was water. He talked about how Arizona has been in a severe drought and its impacts on the surface and groundwater.

“Our future relies on the decisions we make now about our most precious resources,” he said, sharing how, 10 years ago, he stood in the same position and warned legislators about drought. “Today, we have no choice but to pay attention.”

On top of working to protect surface water levels, Rambler said that it’s time for Arizona to evaluate its groundwater laws and establish stricter regulations to protect it.

“The legislature must embrace a fundamental philosophy that encourages water conservation and sustainability,” he said. “Arizona must live within its means.”

Petersen acknowledged the burgeoning water crisis facing the state in his speech.

“We are all aware that Arizona is experiencing a severe shortage of water, which has worsened our state’s devastating wildfires,” he said. Lawmakers, he added, will work to “ensure that our state has a sufficient and sustainable water supply for future generations.”

Rambler also extended an invitation to the senators and representatives in attendance, asking them to learn more about the tribes in Arizona as well as visit tribal land, even if there is not one within the districts they represent.

“Give us the opportunity to tell our story,” he said. “Come learn about our unique history of our culture, our lands, and our economies.”

He closed out his speech with a reminder that, even though tribes may be only a small part of the electorate, voters have come to understand the importance of tribes to Arizona and its economy.

“Tribal communities decide elections,” Rambler said. “We are good neighbors. We are partners committed to positive growth, and we have a lot to offer. Working together, we can ensure a strong, sustainable future for Arizona.”

During their speeches, Rambler and Lewis shared with attendees how their people ended up on their tribal land today.

Rambler opened his speech by introducing himself in the Apache language, telling everyone in attendance that his family and ancestors were initially from the Oak Flat area, about five miles east of Superior.

During the 1850s, rich minerals were discovered in the area by miners, Rambler said. The discovery resulted in a war between the San Carlos Apache people and the miners supported by the U.S. Calvary.

“They overpowered my ancestors with their rifles and herded them like cattle at gunpoint to old San Carlos, also known as Hell’s 40 Acres,” he said. “I am the descendant of prisoners of war, proud Apache warriors.”

“Since returning home, we’ve had to fight and purchase parcels of land that created what is now our checker-boarded reservation,” she said.

Lewis pointed out that, even though Indian Nations and Tribes Legislative Day is a way for Indigenous communities across Arizona to come together to celebrate, it’s also an opportunity to recognize tribal nations’ contribution to the state.

“Although we celebrate today, we must acknowledge our shared history with Arizona,” Lewis said. It involves the state and federal control of tribes, she added, along with violence, broken promises, and starvation.

Pima County Recorder Gabriella Cázares-Kelly, a member of the Tohono O’odham Nation, said she’s been to the annual legislative gathering many times before, but said Rambler’s speech was one of the most powerful speeches she’s ever heard delivered to lawmakers.

“I was so inspired by his words, and I wish that more people had been able to hear what he had to say,” she said.

Rambler talking about how he is the descendant of prisoners of war is significant, Cázares-Kelly said, because it shines a light on the state and country’s history that rarely gets attention outside of Native communities.

“That was really powerful, and I was really glad and proud to hear his words,” she added.

Cázares-Kelly said the entire event this year felt different. She said as she walked up to the state capitol building, she could see a community coming back together after being separated for a long time due to COVID-19.

“That was really powerful,” she said.

Still, there was some disappointment. Since the Arizona Senate hosted the event, she expected to see senators among the crowd, interacting with their constituents. But few Republican senators, who are the majority in the chamber, attended.

“The majority party was missing,” she said. “I was very disappointed with that, especially because this body creates bills that impact our tribal communities.”

Cázares-Kelly pointed out that it takes a lot for tribes to visit the Capitol, especially the more rural tribes, and to have so many Republicans not even bother to show up is disappointing.

The full video of the joint session featuring all of the speeches presented on Jan. 11 can be found on the Arizona State Legislature website.

U.S. to hit debt limit much sooner than expected, thrusting Congress into showdown