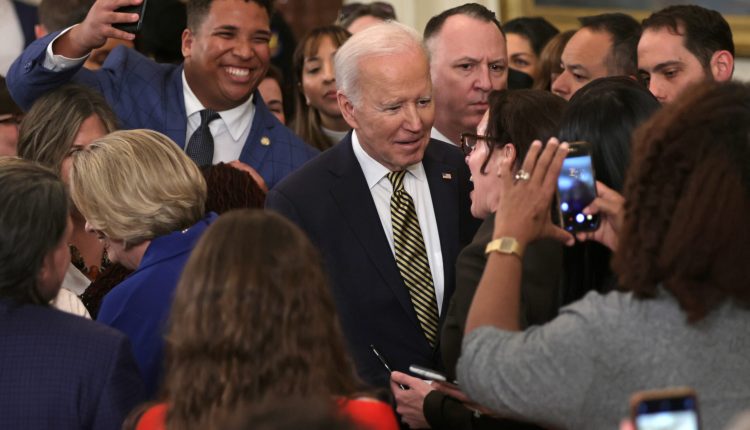 Tribal leaders, advocates, and communities across the country are applauding the reauthorization of the Violence Against Women Act, which includes the extension of tribal jurisdiction over non-Native perpetrators of sexual violence, sex trafficking, stalking, child violence, and obstruction of justice.

“By strengthening and restoring Tribal jurisdiction and providing necessary resources to Tribal governments through VAWA, Tribes will be better equipped to keep their communities safe and ensure justice for Native women,” Simpson said.

NIWRC is a nonprofit organization dedicated to ending violence against Native women and children, according to their website.

VAWA was enacted in 1994 to support domestic and sexual violence survivors but expired in 2017. The law provides federal resources and technical support for programs that help victims of a variety of crimes.

“The Violence Against Women Act addresses domestic violence, sexual assault, dating violence, and stalking and this reauthorization does it in a more holistic way,” said Ruth Glenn, CEO and President of the National Coalition Against Domestic Violence, during a celebration of the bill on Wednesday. “We believe that VAWA allows us to meet all survivors where they are with responses and services specific to their needs.”

This bipartisan legislation was passed as part of the Consolidated Appropriations Act of 2022, and it reauthorizes VAWA through 2027. Advancements in previous reauthorizations have been preserved and a number of new terms have been incorporated.

During the signing of the Consolidated Appropriations Act of 2022 on March 15, President Joe Biden commended the reauthorization of VAMA, saying “the law has saved lives, and that’s helped women rebuild their lives and make children a heck of a lot safer.”

As part of the bill, Biden said “Tribal courts will now be able to exercise jurisdiction over non-Native perpetrators of sexual assault and sex trafficking. And we’re providing more support for legal services and for law enforcement to get the training they need to help handle the trauma survivors are experiencing.”

Biden hosted a celebration of the reauthorization of VAWA on March 16, where he invited Tribal leaders and advocates of the bill. The bill will go into effect on Oct. 1

Pascua Yaqui Tribal Chairman Peter Yucupicio attended the celebration of VAWA because the tribe has been a leader in championing public safety for its members and surrounding community as one of the first three Tribes to prosecute non-Indian defendants in its tribal courts beginning in 2014, according to the tribe.

“The Pascua Yaqui Tribe was the first Indian tribe to convict a non-Indian defendant under the 2013 VAWA provisions,” Yucupicio said in a statement. “With the enactment of this important legislation today, the Pascua Yaqui Tribe is empowered with additional tools to prosecute dangerous offenders and protect our community.”

Tribal governments — police, prosecutors, and courts — are essential to the response to crimes that occur on tribal lands, the Pascua Yaqui Tribe said in a news release. With the enactment of VAWA, Congress and the Biden Administration acknowledge the key role tribal governments play in protecting their communities from child and sexual violence, sex trafficking and stalking.

Navajo Nation First Lady Phefelia Nez and Second Lady Dottie Lizer long advocated for the reauthorization of the Act, in meetings and testimonies on Capitol Hill and congressional visits, according to the tribe.

“We express our deepest gratitude to the Biden-Harris Administration for reauthorizing the Violence Against Women Act and recognizing that all persons, including Navajo women and children, have the right to live violence-free lives,” First Lady Nez said in a press release. “The law allows survivors from all tribal communities to have more access to healing, justice, and restoration. The reauthorization is a major victory for all of Indian Country, especially those who have long advocated and supported the Act.”

Second Lady Lizer said in a press release that throughout their administration they’ve heard countless stories of the pain of victims, survivors, and their families due to violent acts.

“Every victim and survivor needs to know that there can be a path to justice and healing with collaborative efforts,” she said. “We need to ensure every survivor in tribal communities has help and resources in a moment of crisis.”

Sen. Victoria Steele, D-Tucson, said that the reauthorization is a big deal for Indigenous communities because it means more justice and safety for Indigenous people who are victims of violence.

“Currently there are some pretty significant jurisdictional gaps that put Native women at risk for high rates of violence,” Steele said, because before the reauthorization of VAWA if an Indigenous woman was raped by a non-Native, the tribal courts could not prosecute that individual.

In some tribal communities, women face murder rates that are more than 10 times the national average, according to the Department of Justice.

According to a report from the National Institute of Justice, 84% of Indigenous women experience violence in their lifetime, compared to 71% of white women.

“Our goal with VAWA is to ensure that women are safe and that every victim has a path to justice,” Sen. Lisa Murkowski, R-Alaska, said in a press release. She was one of several senators to push the bill through legislation. “Due to the work of countless advocates and survivors, I’m confident it will improve lives and increase safety for women across the country.”

The VAWA reauthorization expands prevention efforts, supports and protects survivors, and holds perpetrators accountable for their violent actions, according to officials.

It provides for increased resources for law enforcement and judicial systems, including in Indigenous communities, while improving access to essential support services such as healthcare and safe housing for victims.

In addition to restoring Tribal jurisdiction over certain crimes, the bill will also codify the Tribal Access Program to enhance Tribes’ ability to access and obtain information from national criminal information databases.

It will establish a reimbursement program, through which the U.S. Attorney General may reimburse Tribal governments for expenses incurred in exercising special Tribal criminal jurisdiction.

It permanently reestablishes the U.S. Bureau of Prisons Tribal Prisoner Program to allow Tribes to place offenders convicted in Tribal Courts of violent crimes in federal facilities if the sentence includes a term of imprisonment for one or more years and it increases resources to Tribal governments exercising special Tribal criminal jurisdiction.

“The historic tribal provisions in this bill attest to years of powerful, collaborative efforts between survivors, tribal leaders, and allies across Indian Country,” said National Congress of American Indians (NCAI) President Fawn Sharp in a press release. “By exercising our inherent sovereignty and jurisdiction, Tribal Nations will continue to increase safety and justice for victims who had previously seen little of either.”

“This VAWA reauthorization goes beyond just restoring our inherent tribal jurisdiction to protect our communities, it creates another powerful tool to address the epidemic of Missing Murdered Indigenous Women across Indian Country,” said NCAI Task Force on Violence Against Women Co-Chair Shannon Holsey in a press release.

A big provision added to VAWA was the establishment of the Alaska pilot project, which allows a limited number of Alaska Native Villages to exercise Special Tribal Criminal Jurisdiction and civil jurisdiction over non-Indian perpetrators.

“In 2020, more than half of the women surveyed in Alaska had experienced intimate partner violence, sexual violence, or both in their lifetime,” Murkowski said in a press release. “We know we have to address the ongoing crisis of violence — and now, the necessary resources are on the way to create safer communities for all women.”

Chief Mike Williams of the Akiak Native Community, who also serves as the NCAI Alaska Region Vice-President, said, “The Alaska pilot program and Alaska Native Village jurisdiction is pivotal to transforming the public safety crisis in Alaska. This reauthorization of VAWA empowers us to take the necessary steps to build healthier and safer tribal communities in Alaska and across Indian Country for generations to come.”